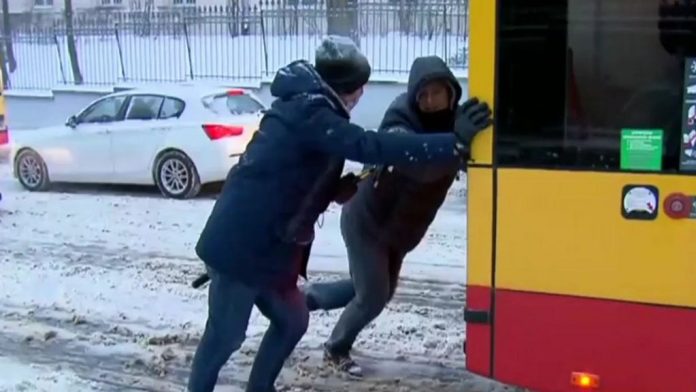 A Belarusian man has been found and honored with a free travel pass in Warsaw after stepping in to help a stuck bus. The man came to the rescue of the bus in Warsaw, where the snow was causing the traffic to get stuck in some areas.

Journalist Pawel Lukasik was in the area reporting for channel TVN24. He was there to report on the bus, which had caused a traffic jam because it couldn’t get out of the snow. The report took a different turn when Dmitry Salogub walked up to the back of the bus and began pushing it.

The journalist decided to step in and help the man with the bus. The two did enough to get the bus moving. The journalist praised him for his effort and it seemed like the story would end there.

Before the journalist helped with the bus, he asked the man if he was rushing to get home. “I don’t speak Polish,” the man said when he was asked the question. The reporter then asked where he was from and he said, “Belarus. Let’s do it together.”

The Story Didn’t End There

The bus was moved by the two but the reporter did not catch his name since he had left before he could ask him anything else. The story appeared to be over since the reporter knew nothing else. But it all went viral after the video was shared online. The man was identified by Belarusian journalists and he told them that he had no idea that he was on air when they were trying to push the bus.

He explained that he had been stuck in a different bus further back. He decided to leave the bus to see what was going on up ahead and that’s when everything happened. Mr. Salogub said he was surprised nobody had tried to help earlier.

“In our world, instead of helping, people make videos of everything. I don’t understand it,” he said while speaking to Belsat TV. After being identified by journalists, it was revealed that he is in the city to study and work.

The report of the stuck bus was shared on Polish media and it quickly went viral. The journalist received some praise for stepping in even though he was just there to cover what was causing the traffic jams in the city.

The BBC has posted a tweet of another journalist who liked what he saw with the journalist stepping in and helping. Here’s what he said:

“I respect real engaged journalism,” said Pawel Biedrzycki. He also spoke about the situation of the bus being stuck and no one else really helping before. Others pointed out that everyone else sat in their cars and waited. “We need such immigrants in Poland. People selflessly wanting to help,” he added.

He Says He’s Not a Hero

Mr. Salogub does not see it as something that makes him a hero. “It just happened this way. You should always be human and think of others. Then the world can change for the better.”

The story caught the attention of the government and the Mayor of Warsaw decided to grant him a 90-day travel pass. The mayor also included a free course in Polish by a language school in the city. The BBC reports that the man plans to start it shortly. The man has also said that he does not plan to return to his country due to the situation there.