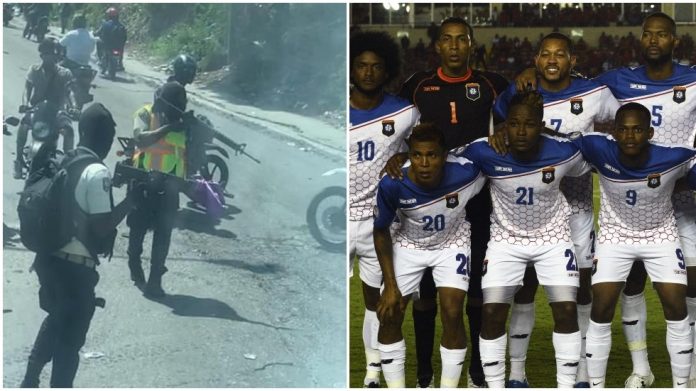 The Belize national soccer team was stopped by gunmen on Monday after arriving to Haiti for a game. The team got there for a World Cup qualifier game and was traveling with a four man police escort when the gunmen showed up.

The team was stopped by armed men on motorbikes. The scary incident was captured on camera by somebody inside the team bus. The video later surfaced on social media, where the soccer federation immediately released a statement. The team’s police escort negotiated with the men and the bus was eventually allowed to keep moving.

Belize’s soccer federation released a statement on Monday, confirming that the team had suffered an incident. The statement adds that the team is shaken but got to the hotel safely.

Here’s the statement from the FFB (Yahoo Sports):

“The Football Federation of Belize takes this time to express its disappointment and disgust at an unfortunate incident faced by the Jaguars as the team was headed from the airport to the hotel this morning in Haiti.”

“We take this opportunity to thank the Jaguars for their bravery and inform their families that the safety of our team is our top priority. We are currently in contact with respective authorities from FIFA and Concacaf and are doing everything possible to get them to safer grounds. It is unfortunate that our Jaguars faced such a traumatic experience.”

Team Co-Captain Deon McCauley included a message in the statement.

“I am happy everyone is safe and I commend you guys for being brave. It was a moment of intense fear. Let’s continue to stick together and please make the best decisions when it comes to the team.”

The match between Belize and Haiti will take place on Thursday. They will be among the teams to play on the qualifiers. Other regions such as South America have a giant question mark on when the games will take place.

Earlier this month, South American Football Confederation (CONMEBOL) suspended the doubleheader that was scheduled for March. The decision was made over concerns from the COVID-19 pandemic and the strict restrictions that some countries currently have. The games were scheduled for the end of the month. It is unclear when they will take place.

“The CONMEBOL Council decided to suspend the double date of the Qualifiers for Qatar 2022 scheduled for March,” a statement from CONMEBOL said on Saturday. “The decision is due to the impossibility of having all the South American players in a timely manner.

“FIFA will analyze the rescheduling of the date, in coordination with CONMEBOL and the member associations. Soon, the different options for holding the matches will be studied.”

The recent suspension has brought up alternative options such as games in Europe. The World Cup will be held in 2022 but teams in South America still have 14 matches to go. Several countries in South America are currently going through a difficult situation due to the pandemic. Some such as Chile have decided to bring back the strict restrictions after an increase in cases.