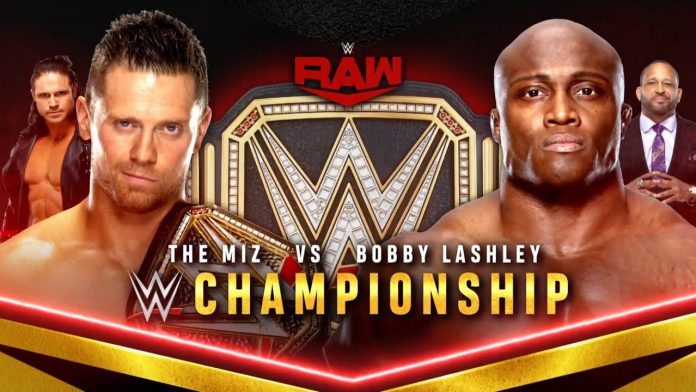 WrestleMania is just a few weeks away but there is WWE Fastlane and the upcoming episodes of Raw and SmackDown. We all kind of have a picture on which matches we’ll likely see at the big event. But everything before it can deliver some huge changes. Here is how WrestleMania can change up:

The Miz is the WWE Champion but he has a tough task ahead. His first title defense will come against Bobby Lashley, who demanded a match after helping him when the WWE Elimination Chamber battle ended.

Bobby Lashley is coming off an impressive win against Strowman and many fans are wondering if this is the start of a run for the former WWE US Champion. If Lashley wins the title, then we’ll likely see him at one of the main matches at WrestleMania. This would change everything since many of us thought it was going to be Drew McIntyre holding the title at the event. Can you imagine a McIntyre vs. Lashley or a Lashley vs. Lesnar at WrestleMania?

Bryan lost his title match at WWE Elimination Chamber but that came right after the match in which he earned the opportunity. In last week’s episode, Bryan brought up the fact that Reigns immediately came in for the match, explaining that it wasn’t really fair. The match later in the night between Jey Uso and Bryan came to an end when Reigns got involved.

This whole thing appears to have sparked a feud between the two. Everything appears to point to a match at WWE Fastlane. Bryan and Edge have already exchanged a few words on what could happen in the future so this has fans imagining a match between the two at WrestleMania. Bryan would have to beat Reigns for the title at the event. There is also the chance that Bryan wins and Reigns asks for the rematch at WM. Edge is the winner of the Royal Rumble and it appears that he is challenging Reigns. This could even set up a triple threat match.

Apollo Crews has a new attitude and it seems like it is working out. In recent episodes, Crews has attacked Big E and made it clear that he is ready for a run. In last week’s episode, Crews had a huge win over Shinsuke Nakamura. WWE Fastlane is around the corner so it wouldn’t be surprising if he is the next challenger for the title. A title win for him would be great and would likely take him all the way to WrestleMania for a match against Nakamura, Big E, or maybe other superstars.

Apollo’s time in the main roster has not seen many wins but he is looking like a tough challenger. The next episodes of SmackDown will show where this run is headed.

Otis and Gable – The Next Big Tag Team?

Otis and Gable have recently appeared in the tag team scene and performed pretty well. The team recently defeated Dominik and Rey Mysterio by pinfall. Gable and Otis have worked with other teams in the past but this seems like a team that is ready to compete for gold. The win against the Mysterios is a great start and who knows, maybe they’ll get the opportunity against Roode and Ziggler. The next matches will give us an indication on where this team is going.