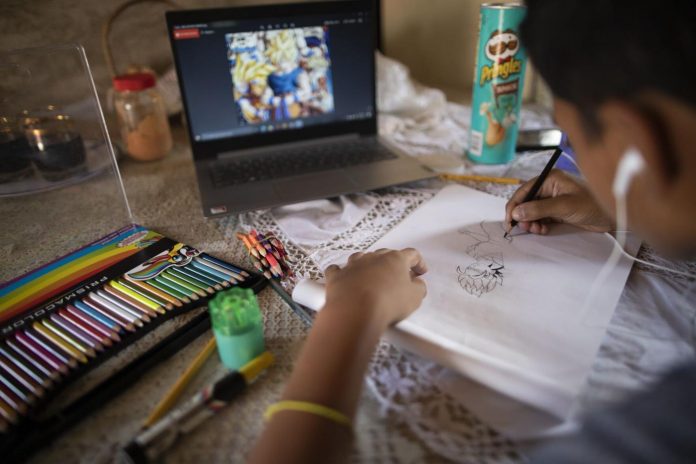 A Venezuelan teen has found a unique way of helping out his family during difficult times. Samuel Andres Mendoza, a 14-year-old from the city of Barquisimeto, Venezuela, is using colored pencils to make drawings and sell them.

Drawing is usually something that people do when they have some time off. But for Samuel, it has become a way to help out his family. It all began when he started selling his drawings on Twitter. He started everything without his mother’s knowledge.

The money earned through the drawings helps his family get by and also pays his special diet that doctors have told him to follow. Here’s what he said in a tweet that contains four images of his drawings:

“Hi. I’m Samuel, I’m selling my drawings for $1 to help my mom with my diet, buy her a house and a shop so she won’t work on the street and get sick with COVID-19 and buy peanut butter for me. Thank you, sir and madam.”

Like millions of Venezuelans, Samuel and his family are living in a troubled economy that seems to have no solution in sight. The country’s situation has quickly forced millions to flee to the US, Colombia, and many other parts of the world.

The drawings caught the attention of many people and WVNSTV reports that he now has more than 15,000 followers on Twitter. The drawings have helped the family, who recently came back to the country after things didn’t go well in Colombia.

Samuel and his mother left Venezuela a few years back in search for a better life. They chose Colombia when things started getting worse in their area. At the time, she had also learned of her son’s diagnosis.

Samuel’s mother lost her job and they decided to return to Venezuela in December. She began selling snacks and also found work as a cleaner. But her job wasn’t enough to cover the expensive diet and everything needed for her son, who also has a diagnosis of Asperger syndrome.

Venezuela’s salaries are among the lowest in the world. Workers earn an average of $2 per month and the country’s currency is constantly losing value. Over the last few years, residents have turned to the US Dollar and now most of the transactions there are done with it. Experts say the problems began with the strict exchange controls in the early 2000s, which eventually left the population with no access to foreign currency and numerous shortages on medicine, food, and other products.

His mother discovered the idea of selling the drawings when he asked her for her bank account information so that people could send money there. The idea even caught the attention of Venezuelan artist Oscar Olivares, who is behind an art academy. He saw his tweets and gave him a scholarship so that he could study drawing.

Samuel said he began drawing at age 5. He prefers to draw anime characters but can also do famous athletes and other characters. His idea has not only earned him money but also gifts from social media followers, including a laptop and food products.