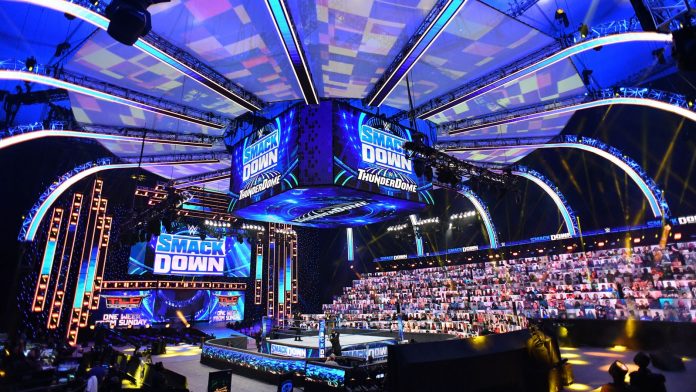 WWE is returning to live tours with a 25-city tour that will begin in July. On Friday, the company announced the tour, which will kick off with three shows in Texas.

There is no information on the events that will take place after the three July shows. Here’s what CBS reports on the three events for Texas:

The tour kicks off with a trio of shows from Texas. On July 16, SmackDown will be held from Houston’s Toyota Center. July 18 features the Money in the Bank pay-per-view from Dickies Arena in Fort Worth. And on July 19, Raw lands at American Airlines Center in Dallas. Tickets for those events go on sale May 26.

WWE has been hosting events without crowds for most of the year and 2020. The company had events without an audience during the early days of the pandemic in 2020. In late 2020, the company began hosting its weekly shows with the ThunderDome, a ring surrounded with many screens to allow the fans to attend the event virtually.

The only event to feature a large crowd was WWE WrestleMania 37, which was held in Tampa. The event was split into two days, just like the previous WM. We’ll keep you updated when there is more.