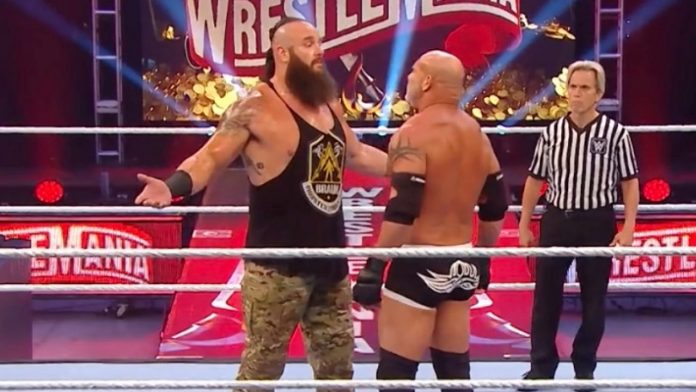 WWE has announced the release of several superstars. The announcement, made on Wednesday, includes big names such as Braun Strowman and Aleister Black.

The company has also announced the release of Ruby Riott, Murphy, Lana, and Santana Garrett. Some of them were seen on the company’s big event, WrestleMania 37, which was held a few months ago.

The most shocking release for many is Braun Strowman. He has been among the most successful superstars in recent years. He recently held the WWE Universal Championship and was usually in the mix for the top titles of the company.

Strowman’s debut made noise as he was the giant of the Wyatt Family. He later went on to have a singles career and big feuds with names such as Roman Reigns, Shane McMahon, and Brock Lesnar.

Strowman’s release comes just months after he was in a match against Shane at WM 37. He recently competed against Bobby Lashley and Drew McIntyre for the WWE Championship.

Another surprising release involves Aleister Black, who saw most of his success on NXT. Black had been part of the main roster for a while but was out of WWE programming for some time. He had recently returned with what appeared to be a new character. Some fans were expecting his character to be in the mix for titles at some point. The release appears to have not only caught fans by surprise but also Black himself.

He said this on Twitter after it was announced:

Im gathering my thoughts as this was a complete left field for me as obviously we just started the dark father character but this was it, thank you so much WWE universe for allowing me to create and give you small bits of myself.

Here is the official announcement from WWE:

WWE has come to terms on the releases of Braun Strowman, Aleister Black, Lana, Murphy, Ruby Riott and Santana Garrett. WWE wishes them the best in all of their future endeavors.

The longest tenured superstar released today was Lana, who made her big debut with Rusev back in 2013. She was his manager on NXT and the main roster for some time. Rusev was released last year and now goes by Miro in AEW. He currently holds the TNT Championship there.

Lana was mostly used on the tag team division, she was recently in a match with Naomi against Brooke and Rose.

Ruby Riott was at WM 37 in a tag team match with Liv Morgan. Riott went on to have a singles career for a short time before reuniting with Liv Morgan. Sarah Logan, one of the three members of the Riott Squad, was released last year. The team reunited without her but Liv Morgan is now the only member left on the roster.

The shocking releases on Wednesday come just weeks after the company made other releases. At the time, the company released superstars such as Samoa Joe, Mickie James, Peyton Royce, and Billie Kay.

The company made other cuts earlier this year. It also made shocking releases when the pandemic started in early 2020. The cuts last year included staff and superstars such as EC3, Kurt Angle, and Lio Rush.

Several names released last year have made their way to other companies, including AEW. Miro (Rusev in WWE) is now one of the top talents in AEW. EC3 is now signed to Ring of Honor. Lio Rush is currently with New Japan Pro Wrestling.