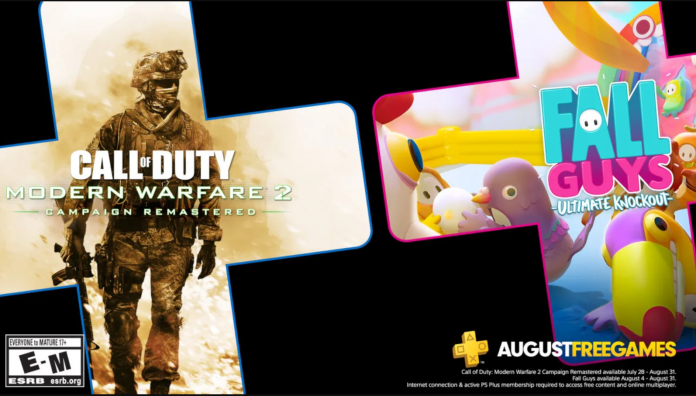 Remember last year’s PS Plus August lineup? If you don’t remember, we’ll give you a couple of hints, an obstacle contest type of video game and a remastered campaign for one of the most popular action games from the PS3 and Xbox 360 era.

The August 2020 lineup arrived at the start of the month and quickly became one of the most successful launches for PlayStation. Fall Guys: Ultimate Knockout was one of the big reasons behind that early success.

The 60-person online multiplayer party game arrived without making much noise on PlayStation. The game was known by the PC community but many PS users found out about it when the August games were announced.

The game went from being an unknown title to many to a giant in just a few weeks. What made it so successful? The first reason was that it was a free PS Plus game, meaning anybody with an active PS Plus subscription could download the game and play right away. The game was also launched for those without a subscription at a price of $19.99.

Fall Guys immediately caught the attention of players around the world. The game seemed like a simple party game where the only goal was to survive. But it was not that easy, with all the obstacles and players attempting to get a win.

Fall Guys saw so much success early on that the game developer behind it struggled to keep the game online. The game went down several times in the first few days since everybody wanted to play. The team kept players updated and its social media accounts became quite popular since they were responding and listening to all the ideas.

Fall Guys went on to become one of the most successful PS Plus releases of all time. The game was so popular that it started featuring all kinds of collaborations. At one point, players were able to purchase a Sonic the Hedgehog skin.

Fall Guys wasn’t the only game that made the August lineup so good. Call of Duty Modern Warfare 2 Campaign Remastered was also offered, giving players a taste of the classic COD game from back in the days. The only bad news about this release is that it didn’t offer the multiplayer side, only the campaign, which is remembered for the shocking turn at the end of the game.

Call of Duty Modern Warfare 2 Campaign Remastered had been released in April of that same year so this was a nice surprise as well. The year before, the subscription also released the remastered version of Call of Duty 4: Modern Warfare. That game was a few years old when it was offered on PS Plus but it did feature the online multiplayer.

Last year’s lineup only featured two games but it went on to set records with Fall Guys. August 2021 is just around the corner and we’re all hoping PlayStation tries something similar. The announcement should come in a few days.