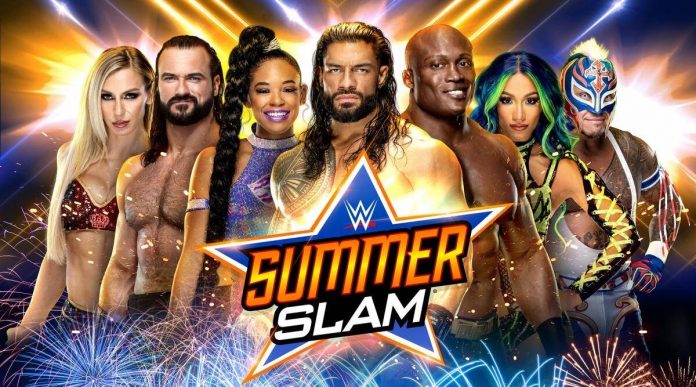 WWE SummerSlam (2021) is just five days away and the match card is pretty much set for this one. Over the last few weeks, the WWE SmackDown and Raw brands have seen a number of feuds start or continue. The match card will even feature the return of two legends who will be competing for the main titles of the company. Here is the match card for the upcoming event and our predictions:

Nikki will be facing two former champions in this match. As we all know, she captured the title from Charlotte, who had won it the night before. The opportunity to go for the title came when she won the Money in the Bank briefcase before the match between Rhea Ripley and Charlotte Flair. This is Nikki’s first big title match since winning it weeks ago.

I think Nikki will find a way to win this one. She recently won the title and I think she will keep it for some time.

Drew McIntyre and Jinder Mahal used to be on the same team a while back. But things are very different now as they are both in a feud that started weeks back. The former WWE Champions have been going at each other in recent weeks and Jinder’s team actually cost him his only chance at the Money in the Bank contract. They interfered in that match and pretty much took him out of it. McIntyre has gotten some revenge by attacking Jinder’s team.

This one is difficult to predict since Jinder will likely have his team on his side. McIntyre has already defeated Jinder’s team. I believe they will get involved and somehow cost him the match when he is about to win. This would likely mean a longer feud between the former 3MB teammates. 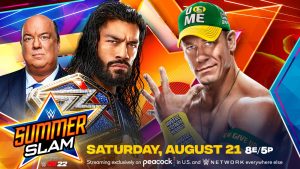 Roman Reigns won his match against Edge at the last event. But his win was quickly cut short by the return of John Cena. The WWE legend, who is currently tied with Ric Flair for most championship wins, made it quite clear that he was back to compete against Reigns. The two have faced each other before but this return and challenge made things a lot more interesting since Cena had been away for some time. Reigns later made it clear he would not be competing against Cena but that was interrupted by a challenge from Finn Balor, who is back to the main roster after a second run at NXT. Reigns accepted the challenge and a contract signing was held in the following episode.

The signing turned chaotic with other superstars getting involved. But in the end, it was Cena who grabbed and signed the contract. We had never seen this before but this has left out Balor from the match.

I think Reigns will win this match with maybe the help of The Usos or Finn Balor. I believe Balor will get involved because Cena got involved to sign that contract.

Bobby Lashley (with MVP) vs. Goldberg (Singles match for the WWE Championship)

Bobby Lashley has destroyed the competition since becoming the WWE Champion earlier this year. But the WWE Champion has probably his toughest task ahead with the challenge from Goldberg. The former WWE Universal Champion is back and ready to compete in one of WWE’s biggest events of the year.

Goldberg has been pretty successful in his returns, capturing the WWE Universal Championship at one point and competing against some of the biggest stars of the company. But I think Lashley wins this one. In the past, there have been reports of The Hurt Business getting a new member. It would make sense to have the new member get involved here and help him retain the title.

Rey and Dominik Mysterio have a rematch for the tag team championships. They lost the titles a few weeks back but their feud goes all the way back.

I see The Usos retaining in a close match here. Maybe with a distraction or a quick pin. I wouldn’t be surprised if this feud continues.

Bianca Belair and Sasha Banks are about to fight again. The Boss recently made a return and teamed up with Belair. The whole thing ended with Banks attacking Belair and making it clear she was back for the title.

Belair has been the champion for a little bit but I could see Sasha winning it here. This would likely extend the feud between them. We could also see the introduction of Carmella, Morgan, and Vega to the feud. Some of them have already been involved but the match was given to Sasha since she did lose the championship and has the right to a rematch.

Edge vs. Seth Rollins will be happening at this year’s SummerSlam. The two superstars were in much different paths just weeks ago. Edge was in a feud with Roman Reigns and The Usos while Rollins was going up against Cesaro. But things changed when Rollins got involved in the title match that Edge had with Reigns at the last event. The interference helped Reigns retain the title. Since then, Rollins has attacked Edge and they have exchanged a few words. Rollins initially appeared to be avoiding the challenge but he accepted when Edge brought up some things and said he was a lite version of him.

Damian Priest will have his first big title match since arriving to the main roster. Over the last few weeks, Sheamus has faced stars such as Ricochet and Carrillo. But Priest has the opportunity to face him one on one for the US title.

My prediction is that Priest will capture the title here. He is a new face to the main roster but has already been in somewhat big rivalries with stars such as The Miz.