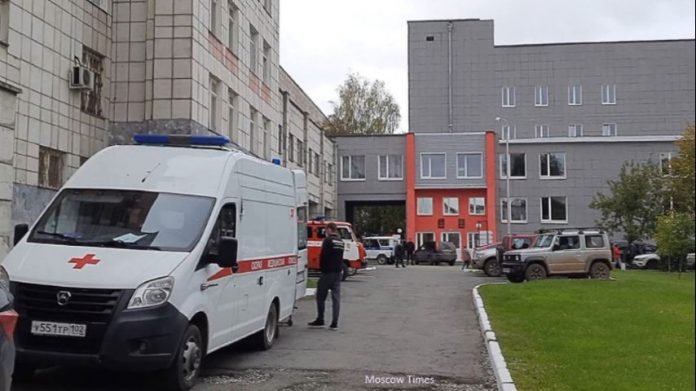 A gunman has killed at least six people in the Russian city of Perm. The attack, which took place in the morning, began when the gunman walked on to the campus and started firing.

The shots immediately forced students and staff members to barricade themselves inside the building. Authorities said they stopped the attacker after injuring him. Recent reports have said the attacker is believed to be a student.

Six people lost their lives in the attack, which occurred at 11:00 AM at Perm State University. Reports say more than 20 people were injured. The initial report was that eight people had been killed by the gunman. But it was recently said that the death toll was lower at six.

Videos shown by news channels across the world show ambulances and police arriving to the area. In one video, several students and staff members are seen running out of the building. Another video shows a group of people standing outside and some hugging as they waited for more news.

One professor at the university spoke to BBC and this is what he said:

“They jumped out in some horror, screaming.”

“One of the students told me that it was a shooting. I heard pops, everyone began to scatter in different directions. I went to my students in the second building and continued to hear the pops.”

Russian TV posted a video on social media of students jumping to safety. Several of them are seen throwing their bags and jumping after stepping outside the windows. Those who stayed inside reportedly barricaded the doors with chairs and other objects.

It is the second shooting that has taken place at a Russian school this year. In May, nine people lost their lives and more than 20 others were injured when a former student entered the school. The former student reportedly visited the place before but was not allowed in. He then returned but was stopped by a security guard, who was injured by the attacker. The wounded guard pressed an alarm that alerted the students and employees inside.

Seven students and two teachers lost their lives in the attack, which ended when the gunman attempted to exit the building. The gunman pleaded guilty to the murder of two or more persons the day after the attack. The attack sparked the requests of politicians to toughen the gun laws. Psychological tests and raising the age to obtain a permit have also been proposed by experts, including the Director of the National Guard of Russia.