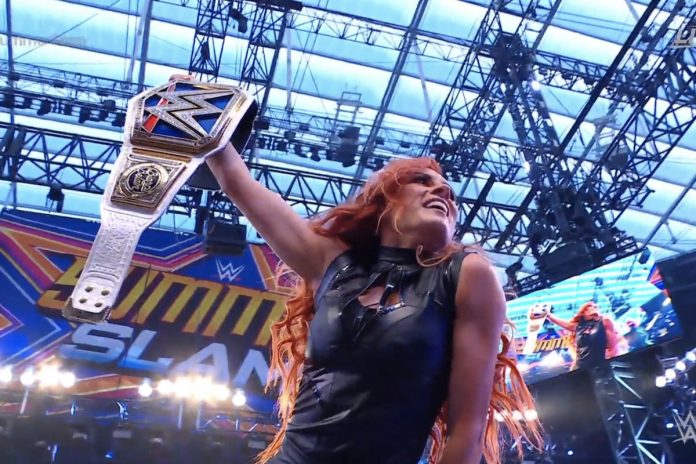 WWE’s main roster has seen numerous titles changes throughout the year and there will likely be a few more before we turn the page to 2022. The title changes here include only the main roster. Wrestletalk has kept an update on every single change and here we’ll be using that list and explaining how it happened.

2021 began with Roode and Ziggler taking the tag team titles away from The Street Profits. Their reign was over four months, one of the longest when it comes to tag team titles this year.

The dominating tag team of Jax and Baszler went on to win the titles at the WWE Royal Rumble event. This reign lasted over 100 days and included matches against the majority of the tag teams on the women’s division of the main roster.

Riddle has only been on the main roster for a short time but the former NXT member has been quite successful in 2021. His first title win of the year came at the WWE Elimination Chamber event, where he defeated Lashley and Morrison.

The Miz shocked the world in February when he cashed in the Money in the Bank contract. The briefcase, which had been won from Otis, allowed him to cash in on a Drew McIntyre who had just won his match at the WWE Elimination Chamber event. The Miz also got help from Lashley to make this happen. That move would end up costing him less than two weeks later after Lashley got a title match.

The Miz only held the WWE title for eight days. The agreement between The Miz and Lashley seemed to be a title match for the help he got against McIntyre. Lashley dominated that match and captured the WWE Championship.

The WWE Raw Tag Team titles changed hands on March 15 when The New Day defeated Alexander and Benjamin. The Hurt Business, a team made up of Lashley, Alexander, Benjamin and MVP, would break up just days later. It is now just Lashley being managed by MVP.

The WWE Raw Tag Team titles changed hands at this year’s WrestleMania. The winners were Omos and AJ Styles.

Night 1 of WM 37 saw the match between Banks and Belair. The two had been feuding for weeks and this saw the former NXT member capture the SmackDown title.

The WWE United States title changed hands when Sheamus surprised Riddle at WM 37. The win came in Night 2 of the event.

Apollo Crews got a title match at WM 37 and did not waste the opportunity. He even introduced a partner by the name of Commander Azeez, who got involved in that match.

Rhea Ripley had just arrived to the main roster and challenged Asuka for a match at WM 37. The former NXT Women’s Champion went on to win the title and defend it several times.

Natalya and Tamina captured the Women’s tag team titles on May 14, defeating Jax and Baszler. This was big for the tag team, especially for Tamina, who had never won a WWE title since debuting on the main roster in 2010. The team still has the titles but the division has been slowed down by the recent releases, which have left only a handful of tag teams on both brands.

Dominik and Rey Mysterio had been tag team partners for months now but most of their matches had come against the team of Murphy and Rollins. At WrestleMania Backlash, they got the opportunity to face the SmackDown tag team champions and won the match.

Charlotte Flair got another shot at the WWE Raw Women’s Championship and was successful, defeating Rhea Ripley. But the reign was among the shortest of all time since there would be a new champion the following day. 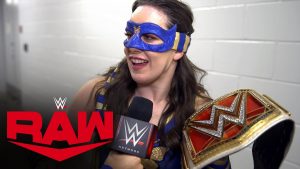 Nikki Cross, now known as Nikki ASH, had recently won the Money in the Bank briefcase. All she had to do was wait for the right time to cash in and it came 24 hours hours after winning the contract. Rhea Ripley and Charlotte Flair had a rematch for the title but Charlotte got disqualified after hitting Ripley with the title in the face. The disqualification meant a win for Ripley but no title. Ripley then attacked Charlotte, giving Nikki ASH an opportunity to come out, give the referee the briefcase, and hit the finisher for the win.

King Nakamura was given a title match against Apollo Crews and he got the win. This is the second IC title reign for Nakamura.

Riddle and Randy Orton are the new Raw tag team champions after defeating the dominant team of Omos and AJ Styles. The match came after weeks of Riddle attempting to convince Randy Orton to be a team. At the beginning, Orton made it clear he was not part of the team and even RKO’d Riddle. But things changed and the title win now makes them an official tag team.

Damian Priest hasn’t been on the main roster for long but the former NXT member has had some big wins along the way. One of his biggest came when he defeated Sheamus at WWE SummerSlam for the US title.

WWE SummerSlam saw the return of several stars, including Brock Lesnar and Becky Lynch. Lesnar did not have a match but Lynch did, entering to face Belair. The match was originally set to be Banks vs. Belair. But The Man came in and quickly defeated Belair to regain the title, which she relinquished not too long ago after announcing her pregnancy.

The Raw Women’s Championship changed hands once against last month. The reign of Nikki ASH came to an end after 33 days. The new champion is Charlotte after defeating Nikki ASH and Rhea Ripley at WWE SummerSlam.

The WWE Championship is the latest main roster title to change hands after Big E came in to cash in on Bobby Lashley. The former IC Champion had announced he would cash in and he did it. Big E could have cashed in on anybody but he decided to go for Lashley. The former WWE Champion put up a fight but Big E was ready and after a couple of finishers, he was the new champion. The win here will likely set up a match between Big E and Roman Reigns at WWE Survivor Series. We’ve already seen The New Day member confront Reigns and his team so it is just a matter of time. But that also depends on what happens between Lesnar and Reigns in the next few weeks.