Respawn’s battle royale title Apex Legends will be launching a new season very very soon. The season is so close that the company has started to release its teasers and trailers. Here is everything we know about the upcoming season:

Any gamer who has been following Apex Legends or is simply playing the game knows there is a new map coming up. There is no hiding that the game developer has a new map 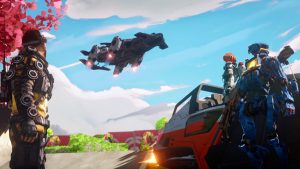 for next season. Recent game teasers pointed to the Legends going to a new map. Also, the latest trailer for the battle royale game has the upcoming character and Mirage going around what appears to be an island.

The trailer shows the two and several other Legends fighting and visiting different parts of the map. At one point, wildlife can be seen close by, almost confirming that the map will continue having different creatures like we’ve seen on World’s Edge and Kings Canyon.

Like the map, the addition of a character is no secret. The upcoming character, Ash, can be seen hanging out with Mirage during the latest trailer. There is no trailer on her abilities just yet but it probably won’t be long before we see that since the season is just about to end.

Apex Legends has made it a common thing to introduce a new character every season. The most recent is Seer, who was quite controversial in the beginning due to what a lot of the community saw as overpowered abilities. Recent updates have adjusted his abilities.

The other addition everybody is waiting for is the CAR SMG. Like characters, the battle royale title always introduces a new gun at the start of the season. In the past, we’ve seen big additions such as the Sentinel and Volt. Speaking of weapons, rumors point to one of the old weapons going to the care package. Nothing has been confirmed so we’ll have to wait for the patch notes to be posted by EA and Respawn.

Fixes and Adjustments to Characters

Every new season of Apex Legends brings a ton of fixes to the game. Players are hoping the update delivers some great fixes since the game has been heavily affected by issues in recent seasons. Constant disconnects during Ranked games, errors randomly popping up, and problems with audio during matches are some of the things players want to see gone from the game.

The new season also means changes to some Legends. In the past, new seasons have brought surprising changes and some that were requested by the community. Back in season five, we saw Pathfinder get that huge nerf, making his grapple time significantly longer. We don’t know what the team is planning here but something is always changed when the new season arrives.

The new season also means the introduction of unique cosmetics through the Battle Pass. This model has been around since Season 1 of the game and it gives players something to do while playing the game. The Battle Pass in this game features 100 levels plus an extra 10 that usually bring a couple of cool cosmetics such as weapon skins.

This season’s Battle Pass features two Volt skins, which means the upcoming one will probably focus on a different legendary cosmetic. And as we all know by now, there will be some packs and other items for those who purchase the Battle Pass. The free version does offer some items but it is the regular version that brings something for every level.

Season 10 has just a few days left so that means the new season is coming right after. This season is set to end some time around early November, probably Nov. 2. That means the new season will kick off just hours later. Remember, have your console set to the automatic setting for downloads to get the update right away and have everything ready when you want to play. Coming home to download the update, especially on the PS4, can take some time since the console usually copies it and that process takes about 45 minutes to an hour.