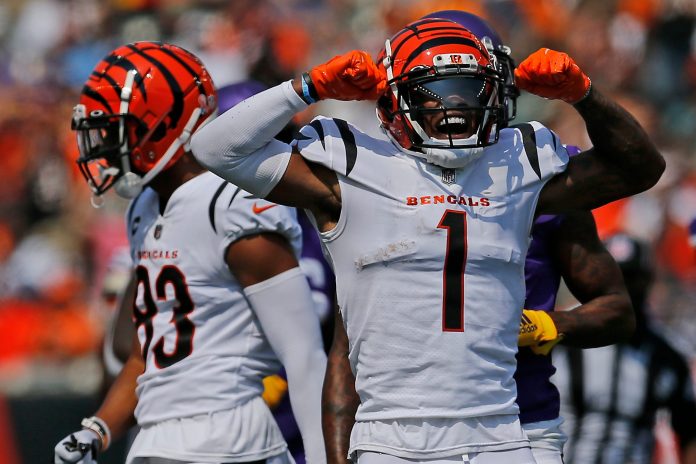 The NFL Regular Season is heating up, with several teams taking big leads in their division while others crushed their opponents to get back in the playoff discussion. Here are the standings and much more after Week 6:

Buffalo Bills (4 – 1) – The Bills have the lead in the AFC East after a big win over the Chiefs last week. The team has another challenge later today, when it faces the Tennessee Titans.

New England Patriots (2 – 4) – The Patriots dropped to 2 – 4, putting them some games back from the top of the division. For New England, it’s been a season of close games. On Sunday, the team lost a game to the Cowboys that went to OT. A couple of weeks ago, the team lost a close match to Tom Brady and the Tampa Bay Buccaneers.

New York Jets (1 – 4) – The Jets have one win this season which came against the Titans. It has not been a good start to the season. One game saw them get 0 points while another saw them get just two field goals. The next game will be against division rival Patriots, a team that defeated them back in Week 2.

Miami Dolphins (1 – 5) – The Dolphins had a solid campaign last season but it’s been a different story so far this year. Miami won a close one against the Patriots in Week 1 and that’s where the wins stopped. The team has dropped five straight, including one to the Jaguars on Sunday. The win by the Jaguars ended a long losing streak, which dated back to last season.

Los Angeles Chargers (4 – 2) – The Chargers lead the division but the opportunity to take a bigger lead was stopped by the Ravens on Sunday. Baltimore crushed the Chargers, holding them to just six points.

Las Vegas Raiders (4 – 2) – The Raiders are right there with the Chargers for the top of the division. Las Vegas had a good Sunday, winning and dropping the Broncos to third place in the division.

Denver Broncos (3 – 3) – The Broncos hot start to the season has quickly stopped after the team dropped Sunday’s game. It is the third loss in a row for Denver and things don’t get any easier from here as they have to face teams such as the Browns and Cowboys in the next few weeks.

Kansas City Chiefs (3 – 3) – The Chiefs remain in the race for the division but the season has not been as smooth as previous campaigns. At this point, the Chiefs are usually in first place and dominating every category on offense. But the team has struggled on defense, seeing many of their opponents put up 30+ points. Sunday’s game was actually the first time since Week 1 that the team allowed less than 30 points.

Baltimore Ravens (5 – 1) – The Ravens have stepped up their game since the Week 1 loss. Baltimore has now won five straight, including games against the Chiefs and Broncos.

Cincinnati Bengals (4 – 2) – The Bengals are one game behind the Ravens for the top of the division. They’ll have a chance to get even closer on Sunday when they meet the Ravens.

Cleveland Browns (3 – 3) – The Browns have dropped their last two games but they have two divisional games coming right up.

Pittsburgh Steelers (3 – 3) – The Steelers aren’t too far back in the race but they have a somewhat tough next few games. In late November and early December, they’ll also have a tough task since they get the Bengals and Ravens. The next five or six games are crucial.

Tennessee Titans (3 – 2) – The Titans have a chance to extend the lead in the division if they can win tonight against the Bills. That won’t be an easy task though as the Bills are coming off big wins, including one against the Chiefs.

Indianapolis Colts (2 – 4) – The Colts have had a couple of close games and could easily be closer to the top of the division. But games such as the OT loss to the Ravens and the three point loss to the Rams have left them at 2 – 4.

Jacksonville Jaguars (1 – 5) – The Jaguars snapped a long losing streak on Sunday, giving Lawrence his first win as an NFL QB. The team had dropped the first five games so the win on Sunday still leaves them last in the AFC South.

Dallas Cowboys (5 – 1) – The Cowboys are running away with the division after a big win on Sunday. The Cowboys have won five straight and their lead was extended after two of their division rivals lost last week.

Washington Football Team (2 – 4) – Washington sits in second even after a loss to the Chiefs on Sunday.

Philadelphia Eagles (2 – 4) – The Eagles opened to a Week 1 win and recently came back to defeat the Panthers. But things have not gone well against teams such as the Chiefs and Buccaneers.

New York Giants (1 – 5) – The Giants are 1 – 5, with their only win coming against the Saints. They have a tough part of the schedule coming up, with games against the Chiefs, Buccaneers, and Raiders.

Arizona Cardinals (6 – 0) – The Cardinals are flying this season and Sunday was no different as they defeated the Browns 37 – 14.

Los Angeles Rams (5 – 1) – The Rams are just one game behind the Cardinals and they have a two game stretch that seems to be a good way to make ground. They’ll be facing the Lions and Texans next. The Lions are currently winless and the Texans have dropped five straight.

San Francisco 49ers (2 – 3) – The 49ers have quickly fallen from the race after a three game losing streak. Still early in the season but with the Cardinals and Rams dropping just one game between them, it will be difficult to keep up.

Seattle Seahawks (2 – 4) – The Seahawks lost on Sunday and that put a huge hit on their division/playoff hopes. Seattle is currently without Russell Wilson and the team will need to win mostly everything coming up to have a chance.

Green Bay Packers (5 – 1) – The Packers have bounced back after that disastrous game in Week 1. Green Bay has won five straight, putting them two games ahead of the Vikings.

Minnesota Vikings (3 – 3) – The Vikings have won two straight and are currently back two games. The next three games won’t be easy though as they have the Cowboys, Ravens, and Chargers. All three are leading their divisions at the moment.

Chicago Bears (3 – 3) – The Bears had a chance to gain ground in the division on Sunday but the Packers and Rodgers scored late in the game to secure a win.

Detroit Lions (0 – 6) – The Lions remain winless after six weeks. Two of those losses have been close. But Sunday’s game saw them lose big to the Bengals.

Tampa Bay Buccaneers (5 – 1) – The Buccaneers have some room at the top after only losing one game so far. Next game will be against the Bears.

New Orleans Saints (3 – 2) – The Saints are somewhat close to the Buccaneers after six weeks. The schedule will get difficult in the near future, with games against Tampa Bay, Philadelphia, Dallas, Tennessee, and Buffalo.

Carolina Panthers (3 – 3) – The Panthers hot start has slowed down after losses to the Cowboys, Eagles, and Vikings.

Atlanta Falcons (2 – 3) – The Falcons sit in last place in the division but have a chance to turn things around if they can get good results in the next few weeks. Next opponents: Dolphins, Panthers, Saints, and Cowboys.