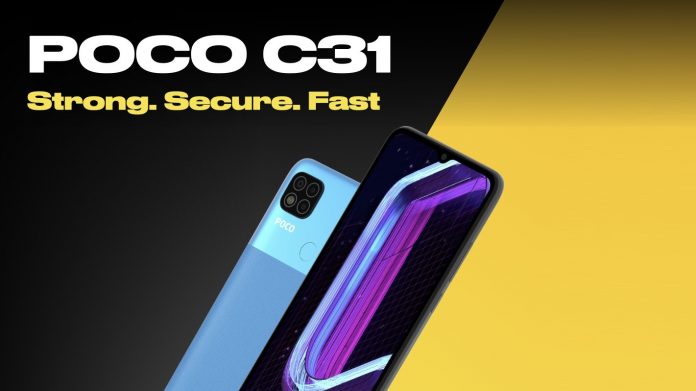 Poco has unveiled a new smartphone that is part of the C series. The C31, the second member of the C series, comes nearly a year after the release of the C3. The first phone did quite well in some markets and the latest release could follow its footsteps due to some of its features and price.

The new device is powered by a Helio G35 processor and the company has announced two different variants, one with more storage and RAM than the other.

The Poco C31 features a 6.53″ 20:9 HD+ screen with TUV Rheinland Reading Mode Certification. In the camera department, the phone features a 5MP front camera and a triple rear camera of 13MP, 2MP, and 2MP.

One of the big highlights of the phone is that it is powered by a 5,000 mAh battery. The C31 is not the first Poco phone to have a big battery, most of them actually do. But this is still a big highlight for the phone due to its very low price.

The phone has been announced with two color options, Royal Blue and Shadow Grey. GSMArena reports the phone will go on sale in India starting on October 2. The device will be available through Flipkart.

Here are the prices for each variant: