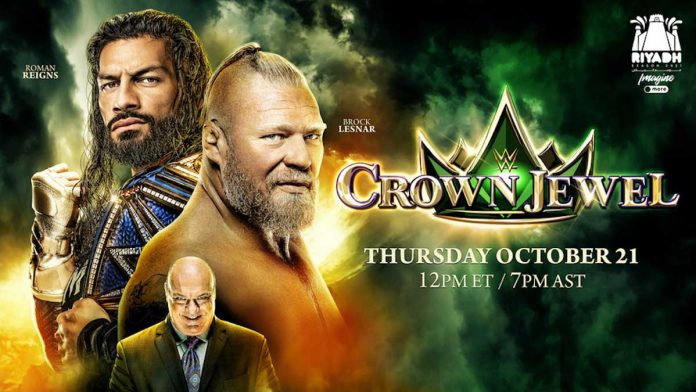 WWE Crown Jewel is set to take place on October 21 in Riyadh, Saudi Arabia. The event will be a big one for the company since it will not only feature the finals for the Queen’s Crown and 2021 King of the Ring tournament but also title matches from both brands. Here is the current match card and much more on the 2021 Crown Jewel event:

Roman Reigns will meet Brock Lesnar once again. The two have a long history, with many of those matches being for titles. This time, it is Roman Reigns who is holding the WWE Universal Championship.

Becky Lynch will not only be facing Belair but also Banks at WWE Crown Jewel. Lynch won the title just weeks ago but Belair does have a rematch for it. Banks recently returned and joined the mix by defeating Lynch in a recent episode of WWE SmackDown.

Randy Orton and Riddle will be going up against AJ Styles and Omos once again. The two teams met at WWE SummerSlam and RKBro became the new tag team champions after a shocking win. The unlikely team of Orton and Riddle will once again have to find a way to get past Omos and Styles, a team that has had very good results since appearing at the start of the year.

Big E has a tough task ahead when he faces Drew McIntyre at WWE Crown Jewel. The New Day member recently won the title from Lashley but McIntyre stepped up to become the new challenger almost right away.

Goldberg and Bobby Lashley already met at WWE SummerSlam. But things didn’t end well for Goldberg, who had the match stopped by the referee. Not only that, Bobby Lashley also attacked his son. Goldberg is looking to get revenge for all of this.

Finn Balor vs. Xavier Woods or Jinder Mahal (King of the Ring Finals)

The King of the Ring tournament for this year has just three names left. One of the names that will for sure be in the final is Finn Balor, who advanced after defeating Sami Zayn. The other two are Woods and Mahal, who will likely face each other this week.

Zelina Vega has reached the finals of the Queen’s Crown tournament. But her opponent for the finals has not been determined just yet. The opponent for her will either be Doudrop or Shayna Baszler.

Edge vs. Seth Rollins promises to be a big match after the two made it very personal. It all began when Rollins interfered in a match in which Edge was battling Reigns for the WWE Universal title. Edge lost the opportunity to win the title but set his eyes on Rollins for getting involved. The feud has escalated, with the two attacking each other several times and Rollins even going to Edge’s home while he was attempting to call him out.

Mansoor and Mustafa Ali were partners not too long ago but last week, Ali decided to turn on him and spark a feud. The attack took place backstage and it didn’t take long for a match to be scheduled between them.