The NFL regular season kicked off a while back but teams are making moves that could potentially help them in the playoffs. The Rams, Raiders, and Titans are among the teams that made moves to get even better, replace players they let go or got injured during the season. Here are all the big moves:

Derrick Henry suffered an injury that could keep him out for the rest of the regular season. The loss of Henry, one of the leading rushers in the NFL since 2019, had analysts writing off the team as a favorite to make the Super Bowl or go deep into the playoffs. But Tennessee moved quick and signed Adrian Peterson. The former Vikings player has bounced around several teams in the last few seasons but his play style is similar to Henry. Peterson debuted for the team last week and while he only had a few yards, he scored once. Tennessee was going up against the Rams so the score was huge in their push to get the win. The Titans ended up having a great second quarter which was enough to give them the win.

Three time Pro Bowl tight end Zach Ertz was one of the first players to be moved during the middle of the regular season. Ertz won a Super Bowl with the Eagles back in 2018 but the trade wasn’t a huge surprise since reports had said the team was looking to move him. The reports went all the way back to the end of last season. The tight end joins a loaded offense with stars such as Hopkins and Green.

Wide receiver DeSean Jackson has a new team after playing just a few games with the Los Angeles Rams. Jackson was let go by the Eagles at the end of the regular season. He later joined the Rams, giving them even more talent at the position. But the Rams recently decided to let him go after he asked for his release.

His new QB had this to say (from ESPN):

“When you can add a talent like that, I think we’re in the business of adding good football players. I’ve always loved him … just being around him today on the practice field, actually working, it’s going to be hard not to get along with that guy. Especially, again, the way that guy can run, it was nice to see that No. 1 jersey flying down the field.”

Jackson joins the team just days after the release of Henry Ruggs III. The first round pick by the Raiders last year was released following a car crash in which a woman and her dog lost their lives. 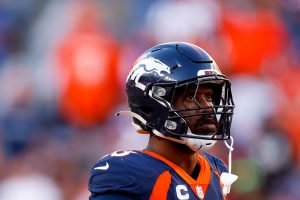 The Rams appear to be going all in on the playoffs this year, not only signing a star WR but also trading for a defensive player. Von Miller was traded to the Rams just days ago, giving the defense another star player. All these moves have easily put them as the favorites to take the NFC this season.

Cam Newton Returns to the Panthers

Newton is back with the Panthers after spending some time with the Patriots. The star QB was let go by the team two years ago. But Carolina has lost Darnold and they need somebody to step in and try to save the season. The Panthers had a hot start but the season has taken a bad turn. The team currently sits fourth in the NFC South with a 4 – 5 record.

Odell Beckham Jr. was recently let go by the Browns after a not so great time there. The star WR suffered numerous injuries there and his numbers saw a big drop. On Wednesday, reports revealed that the star WR was joining the Rams. Los Angeles is loaded at that position but this will give Stafford even more weapons, making the offense even scarier.

Mark Ingram Returns to the Saints

Ingram was recently traded to the Saints, the team where he began his NFL career. The star RB left the team to join the Ravens but was most recently with the Houston Texans. Before the trade, reports revealed that he had signed a one year extension through 2022.

Ingram had this to say about the trade (from ESPN):

“They said if this was any other team this wouldn’t even be a discussion,” Ingram said. “But out of respect for me and what I’ve done throughout my career and how I started [in New Orleans], they wanted to give me the option to make a decision and just let me sleep on it. And I went in and I told them, ‘Coach [David] Culley, Nick [Caserio], I appreciate you guys for giving me the opportunity to play ball and believing in me.’ I don’t take that for granted.

“But to be able to have the opportunity to go back home where I started and to be able to help them fight for a championship, it’s almost something that I couldn’t pass up.”