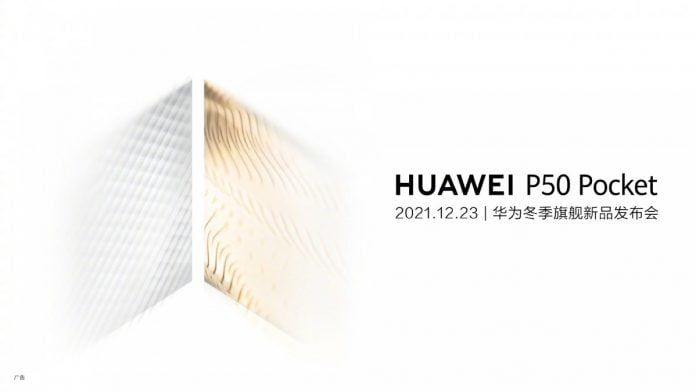 Foldable phones are getting more and more common and companies appear to have more planned. The latest foldable making noise is the Huawei P50 Pocket, which reports say is only a few days away from launching.

The Verge reports that the company’s official Weibo account has said that the phone will be announced later this month. Huawei has already released a few foldable phones, including the Mate X. The phones have kept a similar design but it looks like the company is going with something a little different this time.

A Harper’s Bazaar China photoshoot of the phone shown on Weibo appears to show a clamshell foldable. The design of this phone is not exactly unique since there are some in the market right now. Samsung has done it with the Galaxy Z Flip while Motorola has done it with the new version of the Razr. But this will be the first time that the tech giant goes with this design.

The design from Huawei does have a couple of things that stand out. The most noticeable one is that the upcoming phone has a circular camera bump. The camera bump is located near a different circular section, which appears to be a secondary display that shows time and other notifications.

Everything currently points to this phone being a Chinese launch for now. There is nothing on a global release and with the sanctions that were announced by the US a while back, it is unclear if that will ever happen. We do think that the phone could be cheaper than the Mate X foldables released by the company over the last two years. Competitors such as Samsung and Motorola have released their clamshell foldable phones at a much lower price. The Mate X phones have been some of the most expensive foldable phones so far so it wouldn’t be a surprise if the company goes for a much cheaper option this time.