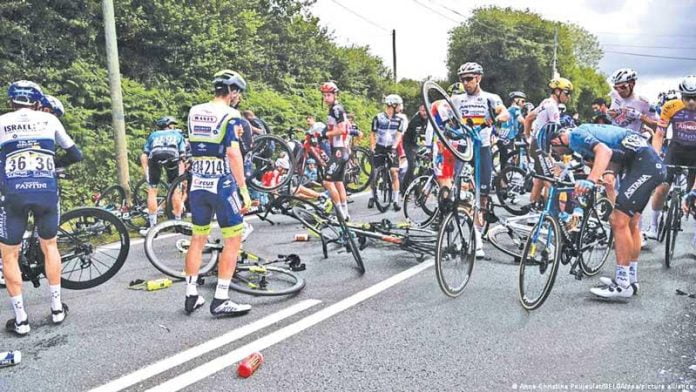 The French woman involved in the Tour de France incident back in June has been fined 1,200 euros. The woman, who made news around the world because of her interference in the race, was also ordered to pay a symbolic one euro fine to France’s professional cyclist association, according to BBC.

In the incident, the woman caused a huge crash after taking a small step in the route of the cyclists to wave a sign. The sign got in the way of the cyclists and it led to a huge crash. The crash was described by many as one of the worst Tour de France crashes.

The video of the incident was shared all around the world. The whole thing put a stop to the race for a few minutes. Several cyclists had to leave the race and some suffered injuries that left them entirely out of the tour. It was announced shortly after that legal action would be taken against the woman.

The woman was looking away while waving the sign. She is seen holding the sign too far, which leads to the incident. The cyclists had about 28 miles left in the first stage of the race when it happened. She turned herself in to authorities shortly after.

BBC reports that prosecutors had earlier requested a four-month suspended prison sentence for the woman. But the court has ordered her to pay two fines, with one of them being for a little over $1,350.