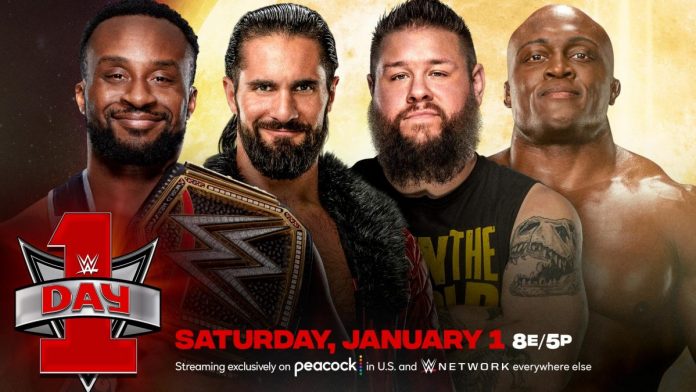 WWE has an event scheduled for January 1 and four of the five matches are for titles. The event has confirmed matches for champions such as Roman Reigns and Big E. Here is the current match card for that event:

Big E has not one but three opponents he has to face at Day 1. Seth Rollins was the first one to be added to the match after he won a ladder match on November 29. In the same episode, it was announced that Owens and Big E would have a match. Rollins was not happy with the decision and got involved. The interference led to Owens winning the match by disqualification. Owens was added to the match for his win. Lashley later attacked all three and explained his actions. Pearce and Deville later gave Lashley the opportunity to face all three stars for a chance to be in the match. Lashley was successful, earning an opportunity to be in the battle at WWE Day 1.

Becky Lynch’s latest opponent is Liv Morgan, who has never held the WWE Raw Women’s Championship. In recent weeks, Lynch has made fun of Morgan for not capturing the title while she was gone. The two had a match earlier this month but Becky Lynch won after using the ropes. Morgan later challenged Lynch for another match and that was accepted.

Edge vs. The Miz

Edge recently returned and began talking about the stars he could face. But that quickly came to an end when The Miz and Maryse showed up. The two had a verbal exchange but The Miz decided to step out of the ring. The following week, another exchange happened between the two. This would lead to a challenge from The Miz that was accepted by Edge.

Edge has only made a handful of appearances in WWE since returning to action. This one isn’t for a title but it should be an interesting one after what’s been said by the two stars.

The Usos will face a known opponent, The New Day. The two teams have had numerous battles over the years. This one is for the tag team titles and it will be quite interesting due to what’s happened in recent weeks. The Usos were involved in the segment in which Woods saw his crown get destroyed by Roman Reigns. Xavier Woods won the King of the Ring Tournament weeks back and his whole celebration was interrupted by Reigns and his team. Woods has a new crown but the two teams still have a battle ahead.

Roman Reigns continues his dominant run as the WWE Universal Champion. But his match at Crown Jewel saw the help from The Usos. Lesnar would lose that match but the former WWE Universal Champion is still after Reigns and his title. Lesnar has made a few appearances recently and attacked Zayn in his match against Reigns. The attack helped Reigns win the match in seconds. But the biggest challenge for Reigns came when it was announced that he would face Lesnar at WWE Day 1.

Reigns has defeated just about everybody on the roster during his title run but Lesnar is easily one of the most dangerous challengers. The former WWE Universal Champion continues to bring up Heyman, which has us wondering if he’s going to remain on Reigns side.

WWE Day 1 is scheduled for January 1 which means there could be a few more matches on the card by the time the event takes place.