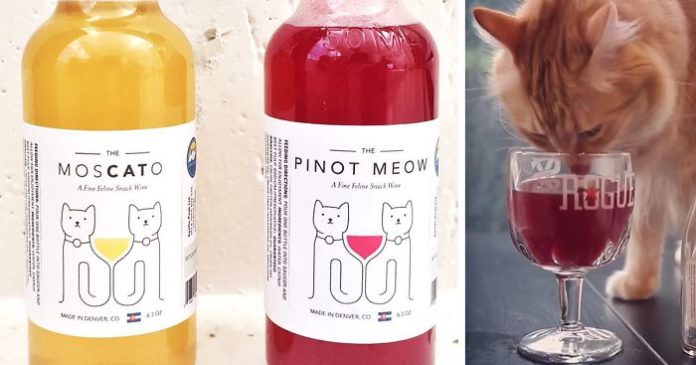 Stepping into the Shark Tank is an entrepreneur with a unique addition to the beverage industry. Meet Brandon Zavala, the founder of Apollo Peak. He is seeking $100,000 in exchange for 10% equity in his company. The Sharks know how it is – it’s been a long day at work, you’re stressed out, and all you want to do is relax with a bottle of wine. But you have nobody to drink with, except for maybe your cat. But cats don’t drink wine, right? Well, wrong. Introducing Pinot Meow, Apollo Peak’s first-ever all-natural wine for pets. Brandon pushes aside a divider to reveal two chairs and a cat bed. Someone is sitting in the chairs, petting a cat and feeding it Apollo Peak.

Apollo Peak pet wines do not contain alcohol nor grapes, which are both poisonous to cats. They are made with all-natural beets and herbs, including catnip, peppermint, and chamomile. All these come with their own distinctive benefit for social interaction. The Sharks cannot stop laughing at the idea of getting a cat “drunk.” With the help of the Sharks, Brandon can ensure that every cat and dog has the opportunity to enjoy a fine glass of wine with their human companion.

The cat is given a sample of the wine, and the catnip kicks in almost immediately – his pupils dilate and eyes go wide. Kevin clarifies that Apollo Peak does not have alcohol in it, which Brandon again confirms that it does not. Cat wine contains catnip, which makes act like they’re a little drunk. The wine is made with organic beets for the coloring. Of course, Robert asks for wine for the Sharks to taste. Lori is curious – if you drink catnip, what happens? Brandon says that you’ll most likely fall asleep. Catnip is used in sleepy teas and herbal teas.

It’s the smell of catnip that makes the cats frisky, Brandon explains. Mark jokes that Kevin could be the king of QVC Cat Wine. Brandon passes out companion wines to each of the Sharks, which includes a Mos-cat-o (get it?) wine. Lori comments on the cute names for the wines. The Sharks cheers to each other and drink the wine with Brandon. Robert asks Kevin what type of a wine it is, and he simply says, “industrial.” Kevin wants to talk about business. Before they get down to business, Mark asks if Kevin has had any to drink, to which he replies “absolutely not.”

Kevin then points out that the cat is not drinking the alcoholic wine right now, so what’s going on? Mark jokes that he has a hangover. Essentially, what they want with cats is a comfortable situation. If the person is at home, the cat will typically come up and start sniffing the drink itself. When they sniff it, they’ll start potentially playing with it – some cats will drink all of it, and some will drink some of it. Robert then asks if Brandon is doing this as a gimmick, and Brandon says that the first batch of Pinot Meow started as a gimmick but they’ve moved on since then. The word got out and eventually, they started making dog wines. Kevin is blown away that they have dog wine. This dog wine is named as “Char-dog-nay.”

Again, Robert and Mark burst out laughing. Lori then says that the names are really funny and cute, but she does not see it as something that anybody would buy. Mark asks for sales, and Brandon says that they have sold over $192,000 worth of cat and dog wine in the past three months. All of the Sharks are blown away by the sales. Daymond asks how Brandon came up with the idea, and he says that he used to work in the pet food industry. He worked as a pet food sales rep and saw a niche for animal beverages.

Mark asks what a bottle costs to produce and sell, and Brandon says that an 8 oz bottle costs $11.95. The bottle costs $1.25 to make. Kevin then says that he is a wine guy, and in America, 97% of the wine is sold for under $12.99. They are asking cat owners to pay the same price as humans for a bottle of wine, except its only 40% of what they pay $12.99 for. Is Brandon worried about that price? Mark says that he has heard a lot of people talk, and when they shop for wine for their cat, they tend to price shop around first – he is, of course, joking about this. Daymond says that $100,000 for 10% means the company is worth $1 million. So, what is he on track to do in sales this next year? 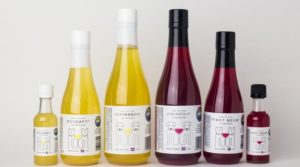 Brandon believes that in 2017, he will perform $1.2 to $1.5 million in sales. Mark believes every word Brandon has said, but there is no way on God’s green earth that he will be in the cat wine industry. Of all the things he could spend his time on, pet wine would be the last – no disrespect meant. It goes without saying, but Mark is out of the deal. Kevin jokes that Mark does not appreciate the finer things in life for himself or a cat.

Lori feels that the idea is cute and it’s something very memorable, and the names are great. It just isn’t a business for her, so she’s out. Robert says that Brandon is the “pet rock” of the pet industry. He just does not see how the business can be a long-term business, and he likes something with a steady future. So, Robert is the third Shark out of the deal, leaving both Kevin and Daymond.

Kevin says that many years ago, he was actually a marketing manager for Miss Mew Cat Food. He learned something about the cat business, which is that cats are very finicky. They are so difficult to actually get into a routine, and once they cling to a flavor or brand, they don’t change. If you ship the product to five families with cats, and three or two of them make it part of a cat’s diet, they will start ordering cases. Kevin has been there in business, which is a gold mine. So, Kevin intends to make an offer.

Kevin proposes $100,000 in exchange for being a third partner, so 33.3% equity ownership. Daymond says to hold up, and he offers $100,000 in exchange for 25%. Kevin says that Daymond does not even drink wine, so he would not understand the nuances of the Pinot Meow. While he might not understand the Pinot Meow, he does understand scaling. Apollo Peak wants to grow like a mountain. In fact, a pile of kittens is called a meow-tain. Lori and Robert burst out laughing. 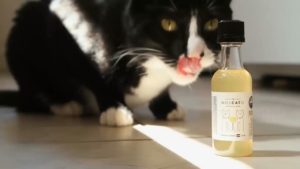 Kevin then says that he can ship $10 million worth of wine right from the distillery to 40 states in the United States. It’s a logistics nightmare that he can pull off. He has a huge wine brand and is the 18th largest seller of wine. Brandon counters the offers with 15% for $100,000. Kevin mulls over the counteroffer, but Daymond budgets down to 20% ownership. Kevin does the same move. Daymond says that Kevin has a different pipeline, which is unproven in that area (Kevin says this is untrue), and he has a different and proven pipeline. Kevin then speaks up, saying that his best opportunity is to ship direct to the customer and save as much money as he can.

Daymond is saying that he can sell to Petco, to Krogers, and to other stores for the pet buyer. However, Kevin says that he is thinking that he is shipping to hundreds of thousands of people that know his wine right now. What percentage of them have cats? Robert urges Brandon to accept an offer. Brandon continues to think things over before speaking. He loves Daymond’s offer, but the one thing he loves more is the margins that he gets for selling Apollo Peak online. Daymond then says that he is signed to HSN, where they sell online. Brandon offers one last counter opportunity to Daymond. He does not, as he would have to drop his ownership stake to get ownership.

With that said, Brandon secures a deal with Kevin as a shareholder in Apollo Peak. He found the $100,000 that he came into the Shark Tank for, as well as an excellent partner with the wine connoisseur himself. Kevin marvels at the idea of Shark Tank, where he found himself investing in a pet wine business.

Since appearing on Shark Tank, Apollo Peak has exponentially expanded their selection of pet beverages. They now include a recently-released craft beer for dogs, which includes “beers” like Mutt Lyte Gold, Mutt Lyte Blue, Twisted Tail Ale, Oatmeal Stout, and Black Print Pawsner. Of course, their selection for cats has also grown to include options like The Meowtini and The Cabernet. Of course, fine glassware specifically meant for your pets is also available.

These typically sell at around $12 for the wine and $9 for the dog beer. From what I can tell, efforts are being made on getting Apollo Peak into retail stores, but it is not available yet. In fact, the store locator on the Apollo Peak webpage actually leads to a blank page. The wines and beers are available solely from their online storefront for the time being, although it would not be a surprise to see these become available in grocery and pet stores near you.