Road To WrestleMania – What’s Next After Royal Rumble (2022)? 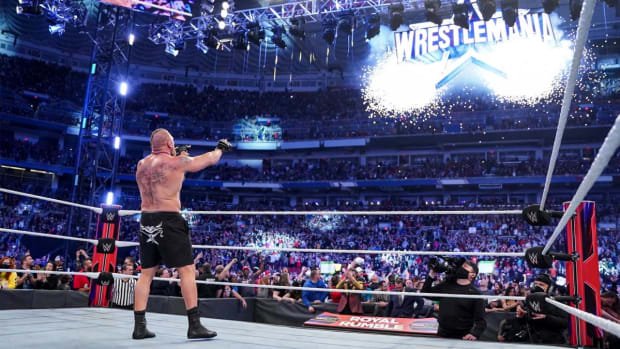 The 2022 WWE Royal Rumble just took place and that means we’re now closer to WrestleMania. The big event is still a few months away but there are plenty of feuds and matches that have yet to take place. So what’s next after the WWE Royal Rumble? Here we’ll talk more on the latest results and how things could go in the next few weeks:

Brock Lesnar had a very interesting Royal Rumble. He lost his title to Bobby Lashley at the event but then went on to win the Royal Rumble, eliminating a number of superstars along the way. Lesnar has always been a strong opponent in that match but this year’s win gives him a couple of options.

As we all know, the winner of that match gets to challenge any champion. He is coming off a loss against Lashley, who he had a short feud with before the event. Lashley is champion once again but what happened during the match leaves everything open for the future. During their fight, Reigns showed up to cost Lesnar his title. The appearance by the WWE Universal Champion makes some sense since the two had a feud before Lesnar became the WWE Champion some weeks back. The two were actually scheduled to have a match at the WWE Day 1 event. But Reigns pulled out before the event after testing positive for COVID-19.

After the announcement that Reigns would not be at that event, Lesnar was added to a title match against Big E and other superstars. Lesnar went on to win that match, later putting him in a feud against Lashley. The appearance of Reigns in that match leaves Lesnar with a couple of options, to challenge Reigns or Lashley. But my guess is that he will go after Reigns since they never had the match. The two have had a match at WrestleMania before but this could be even more interesting since Reigns is now a record champion and Lesnar will be looking to get some payback for what happened at the Royal Rumble.

What Will Ronda Rousey Do?

Ronda Rousey returned at the event and went on to win the match. The former WWE Women’s Champion has the option to challenge Becky Lynch or Charlotte Flair. Any of the challenges would have some history since the three actually had a title match a few WrestleManias back.

Ronda Rousey does have a third option, to challenge the NXT Women’s Champion. This option would give her a different superstar to face. But it wouldn’t be the first time that’s been done. Charlotte recently did that against Rhea Ripley, who was the NXT Women’s Champion at the time. Things could also change from here to WrestleMania so we can’t rule out a new champion that she could pick to face at the big event.

Will Rollins Be In the Mix?

Seth Rollins had his title match at the Royal Rumble event. But the ending leaves everything open for a longer feud with Reigns. Rollins played mind games throughout the feud and that seems to have gotten to Reigns. The former The Shield members brought up their history and Rollins even did something as part of his entrance to anger Reigns.

The ending to their match was not a clear victory by Reigns so it wouldn’t be a surprise if Rollins asks for another match. After all, he did win by DQ after Reigns went crazy with a chair. The story so far has been that Reigns has never beaten Rollins and that could continue. The problem with that is Lesnar, who is probably not happy that Reigns got involved in his match.

What’s Bobby Lashley Going To Do?

Bobby Lashley is the new WWE Champion but he has no clear opponent after what Reigns did. We all think Lesnar is going to go after Reigns, leaving Lashley with no challenger. The roster does have a number of candidates but the upcoming episodes will have to show us who is in the mix. McIntyre would be a good one but he has lost to Lashley in the past and their storyline back then made it clear he could not challenge him again.