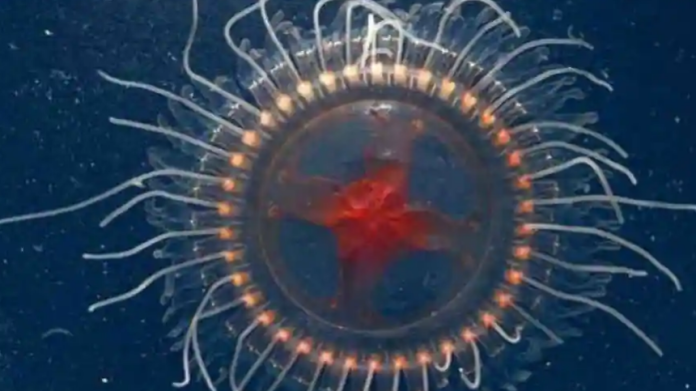 Scientists have uncovered a new rare species of jellyfish that resembles a red alien saucer. The new species, called Atolla reynoldsi, measures 5 inches in diameter and can have between 25 to 40 tentacles, according to researchers at the Monterey Bay Aquarium Research Institute. And like the other known species of the family, it has a deep groove running around the half-mooned shaped portion of its body.

Despite being the same size as a dollar bill, it’s actually the largest known species of the Atolla jellyfish. What’s interesting, though, is that, unlike the other known species, it does not have the single elongate (a long tentacle that usually trails behind the body), which is usually used to identify the jellies.

However, they capture their prey the same way as other crown jellies; they use an extended appendage to snag crustaceans, small fish, and siphonophores (gelatinous marine organisms) that pass through the waters around them.

You like won’t run into these scarlet jellies, however, for they reside in the ocean’s midnight zone—the part of the ocean that extends up to 13,000 feet (4,000m) below the water’s surface (above the mesopelagic zone and below the abyssopegalgic zone). Needless to say, there’s no sunlight down there. It does, however, host a unique assortment of animals, many of which are extremely rare.

In fact, it had taken researchers a long time to confirm the existence of these red jellies. It wasn’t until they analyzed hundreds of hours of video footage taken in the midnight zone—ones that were recorded between 2006 and 2021—that they spotted the scarlet jellies and only occasionally. They had initially suspected that it might be a new species in the crown jelly family but there were simply too few sightings to prove it.

According to a new study published in March 2022, however, researchers have conclusively identified the scarlet creatures as the new species Atolla reynoldsi. They were able to identify 10 specimens of the crown jelly (both physical specimens and sightings from video footage), which led them to conclude that it’s “morphologically” and “molecularly” distinct from the other species in the genus. Their goal is to ultimately use DNA to describe these new additions to the Atolla family.

As for living specimens, only one A. reynoldsi has been spotted swimming in the Monterey Bay, California at depths of 3,300 to 10,500 feet.

According to the Monterey Bay Aquarium Research Institute, more than 220 new species have been identified over the past 34 years. If anything, the existence of these red jellies only raises the question about species that live in the deep waters and haven’t yet been identified. So far, it’s estimated that we, as humans, have only described 10% of what inhabits the ocean.

“We […] need to spend more time and funds exploring and learning about the ocean,” says George Matsumoto, the lead study author and research specialist at the institute. “[as] it’s difficult to protect an ecosystem when we don’t know what lives [there.”