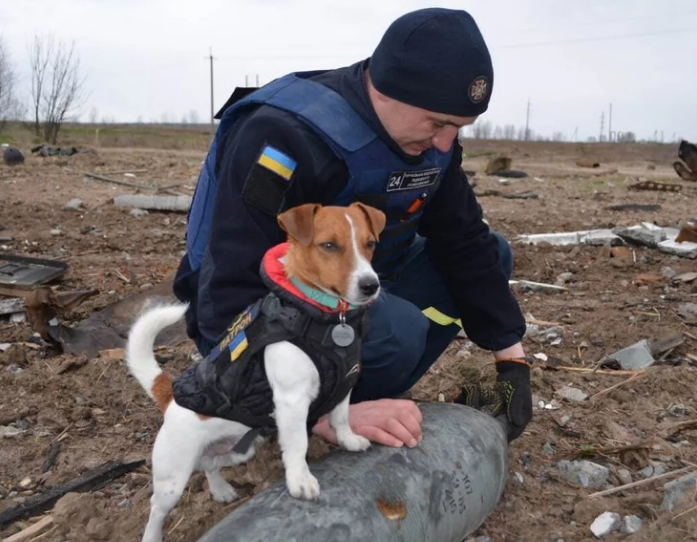 Patron is a two-year-old Jack Russel Terrier who works with the State Emergency Service in the northern city of Chernihiv. His job? To sniff out bombs planted by the Russian army (in add-on to being a good boy, of course).

Since the invasion of Ukraine began, he has helped locate and neutralize nearly 90 different explosive devices, which inevitably has helped saved many lives. Ukraine’s Centre for Strategic Communications even joked that one day “[his] story will be turned into a film” but that for now, he’s busy with his professional duties.

For those who’d like to see the canine hero, the State Emergency Service (SES) of Ukraine has posted many photos on their Facebook page for his fans to enjoy—one of them even has the pup in the arms of a young child.

A video of Patron doing his job in his protective vest was also posted to Twitter last month. Since then, it has received more than 26,000 likes. Several montages of him riding in the car are also available on the SES Facebook page.

It goes without saying that Patron has won the hearts of millions worldwide. Just this week, the SES shared more than a dozen different illustrations of the pup, all of which were submitted by fans across the country. Many depicted the heroic pup in his trademark vest, however, some saw him a little differently (the one with him urinating on a Russian rocket comes to mind).

Other fans have shared sketches and even handmade plushies on social media and you have to admit, they’re all pretty darn cute.

As for Patron, he seems happy with his job. Hopefully, he will be able to sniff out even more explosives in the days to come!

For those who’d like to keep up with Patron and his accomplishments in Ukraine, consider following the SES on Facebook.