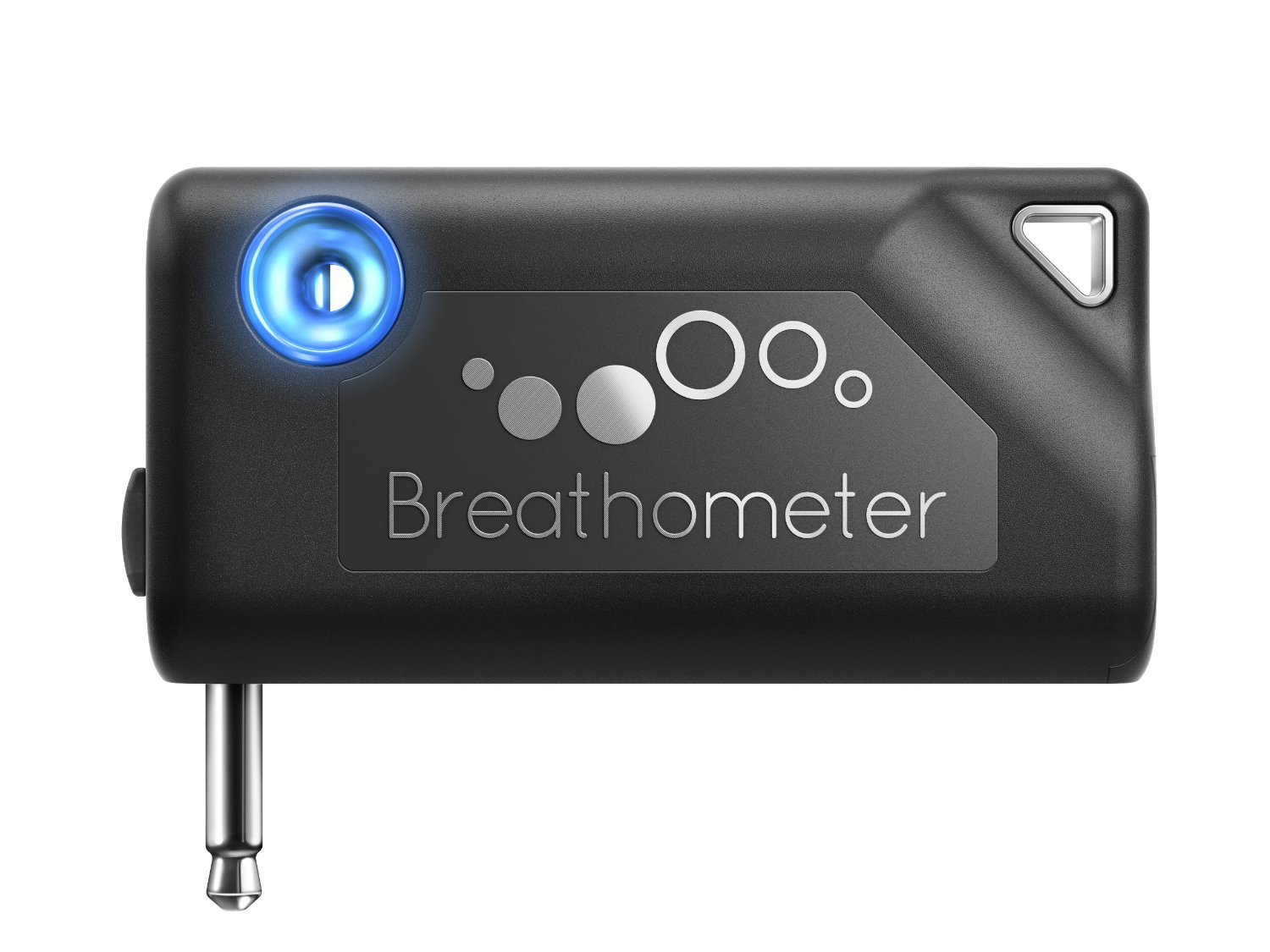 Charles Yim founded Breathometer in late 2012 with the goal of building the world’s first portable breath analysis program. During the time that Breathometer existed prior to its Shark Tank existence, Breathometer only made one product, and that was the all-encompassing Breathometer.

Charles Yim is a silicon-valley hometown hero and is the head of Breathometer. He is looking for $250,000 in exchange for 10% equity in his company. He begins to give the Sharks an example, starting by saying that the Sharks should imagine that they are at a dinner party, or even a local bar having champagne, offering the Sharks a glass. Charles then continues, saying that everyone has the same question, wondering if you are truly safe to drive home even after just a couple of drinks.

Charles then reveals the design of the product, pulling it out of his pocket while a model plays on the television for a larger scale view of the product. Charles pulls it out, reveals the audio-jack, and plugs the device into his iPhone. The device is small and flush to the iPhone, and really does look like it naturally belongs – it blends in quite well and looks conspicuous. Within a matter of seconds of blowing into the device, the user will receive their blood-alcohol-content level, and when they put in a series of statistics about their height, weight and gender, they can also be told how much time they need to sober up, or even hail a cab with the push of a button.

Through an Indiegogo campaign, 4000 initial units were made and sold, distributed to the backers of the campaign. They are also in production small-scale, and available currently for $49.99. Mark asks to see it up close, which Charles then tosses him towards it. Kevin launches into the legality of the situation, saying that imagine a driver relies on the device to make their decision and the huge liability it puts on Breathometer. Charles says that there are numerous disclaimers labeled throughout the application and instruction manual, and the user is required to accept a terms of service agreement. The application also promotes good decision making, and that the information of the application should not otherwise influence any potential decisions like driving home or not close to the legal BAC of the area.

Lori stands up and wants to use it, and the use of the device is simple – blow into a little hole. The device reveals that Lori blows a .04 BAC, which is legal. Charles says that he is actually looking into using a new sensor, and taking Breathometer into a multi-function breath tester, and the investment would be put towards a diabetic sensor instead.

Charles says that he is a hardware sort of guy, and he sold his last business within 18 months of starting it up. His role within the organization is focusing on the development of the product, such as research and development. Kevin mentions the difference in driving-while-impaired in areas such as Europe, Mexico and the United States, to which Charles says that he has been working with ambassadors of each safety board in order to have a proper product that will not generate issues with legality.

Mark immediately launches into an offer, saying that he believes in smart devices as being the future. He offers $500,000 for a 20% stake, but offers Charles a chance to talk to the other Sharks. Lori asks to go in with Mark, wanting to handle the retailing end of the company. Kevin offers $250,000 for 15%. Charles says that within the next 60 days, he is attempting to round up $1 million in investments from angel investors and people such as the Sharks. He says that he is open to more than one shark investing in Breathometer. Mark says that he doesn’t want to work with any other Sharks. Kevin says that the Sharks might offer Charles the full million he is looking for; Robert offers $250,000, if Kevin will match him on that. Lori also contributes, and all three are offering a $750,000 investment for 30% of the company with each of the three Sharks receiving a 10% equity. Daymond also would like to enter, offering $250,000 and unlimited manufacturing for a 10% stake in Breathometer. Daymond also says he wants to remain independent of the other Sharks.

Kevin says that the five Sharks must come together, because Charles could be an unbelievable story that the Sharks need to get behind. Since Mark has had experience in sensors and smart devices before, Kevin wants Mark to explain why he must have the lion’s share of the investment and competing against one another instead of working together. Kevin then wants Daymond to enter the deal, which Daymond says he will if Mark enters as well, which would win Charles all five Sharks.

Mark wants to know how much equity he would get in the deal, which causes Charles to start to think about the offer he wants to the Sharks. Charles then wants to offer Mark $300,000 and splitting the other $700,000 amongst the other Sharks, but Mark says he would settle on $500,000 for 15%. The other sharks would take the other $500,000, splitting the 15% between them equally. This would be a total of a $1 million investment for a 30% stake in Breathometer. Charles thinks about it, asking for a second to make a call to his CFO (Chief Financial Officer).

Charles informs his CFO of the deal, to which the CFO says that he is worried about “too many cooks in the kitchen” – the sharks all have big egos, and could potentially change the entire direction of the Breathometer product, or if they could even work together effectively. However, Charles enters and immediately accepts the deal, taking the full million-dollar investment for a 30% stake in Breathometer. The six then cheer together with the champagne.

In the end, Mark was the only shark to put up the money. The company also received an update segment in episode 529, which aired just a few months after they were in the tank. In the segment, it was revealed that they had received thousands of orders after the episode aired. While they initially ran into problems fulfilling the orders, they eventually managed. By the end of it, they had done $1 million in sales.

A year later, they received a second update segment in episode 604. In it, Yim revealed a new version of the Breathometer called The Breeze, which comes with Bluetooth capabilities. Developed in Cleveland Clinic’s Breath Analysis Lab, they planned on releasing it nationally in Best Buy and Brookstone. Their projected sales for the year also went up to $10 million. They also launched an Indiegogo campaign, which successfully raised over $119,000.

And in 2016, they participated in the Consumer Electronics show. While they were there, they announced that they had partnered up with Uber and the Phillips Corporation, the latter of which is known for their Sonicare toothbrush. They also stated that they would be adding a new component to the breath analysis platform called Mint, which will measure an individual’s “breath quality” for hydration and oral health. Even Mark Cuban showed up at the show to get his own update on the product!

It was later revealed in a Beyond the Tank episode that Philips had ordered 50,000 units from the company. However, they still needed FDA approval before the Breathometers could be shipped.

In 2017, the company ran into some problems. They were required to offer refunds for all Breathometers sold between 2013 and 2015 after the Federal Trade Commission (FTC) determined that the device regularly understated BAC levels—something that the company was aware of. Despite this, they did not inform their customers and continued to sell the product.

In a later interview, Yim blamed the manufacturer for the errors in accuracy. He also said that they planned on working with a better partner for the product. It took a while, but the Mint was eventually released and made available on their website.

As of 2023, the company is no longer in business (Mark had stated that he lost the one million dollars that he invested in the company). While their website is still up, it’s no longer possible to purchase the product—it simply leads you to an error page when you click on the “shop now” button.

Yim had claimed a few years back that the company was acquired but we weren’t able to find any evidence on this. For all we know, it may very well be another failed business venture.