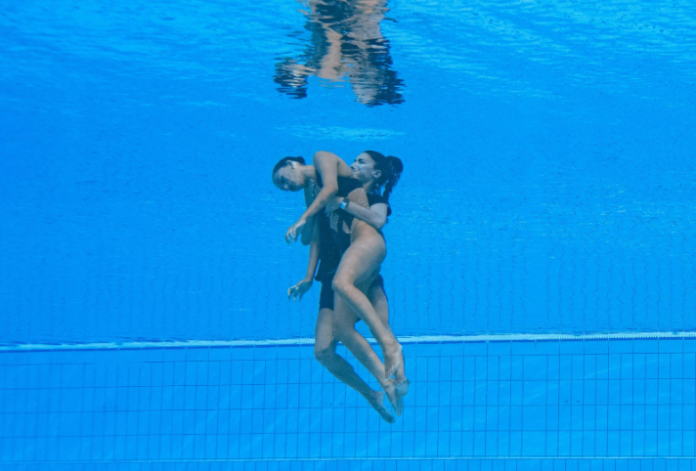 Anita Alvarez, a Team USA artistic swimmer, was finishing up her solo free routine at the World Aquatics Championships in Budapest when she suddenly sank to the bottom of the pool. Her coach, Andrea Fuentes, immediately knew something was wrong.

Despite being fully clothed, she dived into the pool and swam to Alvarez, who was lying at the bottom, unresponsive. Putting her arms around the athlete, she kicked off of the pool floor and quickly brought her to the water’s surface, where another individual helped get her out of the pool. Alvarez was subsequently placed onto a stretcher and given medical attention.

Following the incident, her coach released a statement stating that the swimmer was okay and that she was resting.

Prior to diving into the water, Fuentes had shouted at the lifeguards, who were at the other side of the pool, to get into the water. However, they “looked dumbfounded” and were “paralyzed”. Realizing that they were not going to get in the water, she decided to jump in herself, “faster than when [she] was preparing for the Olympics.”

In a subsequent update, Fuentes let everyone know that Alvarez was doing much better and that doctors had checked all her vitals – her sugar levels, oxygen, heart rate, and blood pressure, and that everything was normal. As for whether or not she’ll be competing in the free team final, it will be determined by expert medical staff.

A member of the US Artistic swimming squad, Alvarez had previously competed for Team USA in Tokyo and Rio. Last year, she was also named Athlete of the Year by USA Artistic Swimming.  However, she does have a history of fainting. Last summer, while swimming at the Olympic qualifiers in Barcelona, she fainted and sank to the bottom of the pool, and once again, it was Fuentes who saved her. It was later revealed that she had fainted due to a grueling workload and lack of rest.