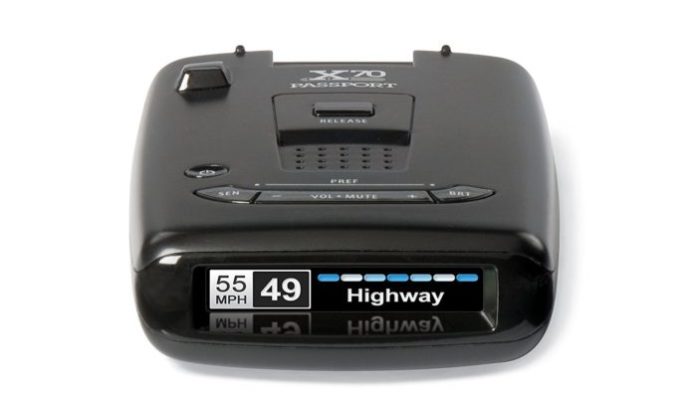 Glad to be back in the Escort range. There are few firms out there that can boast the wealth of options and features in their product line as Escort do. I have already taken a look at the lowest end product, and the highest end, so now we are going to test out their lower mid range radar detector, and let me tell you, I think I have found the perfect combination of price and function on the market. The Passport X70 comes with good hardware, decent internal software, and that all important app integration that boosts the utility of the box beyond what the core features might suggest.

One of the more interesting aspect of the radar detector market is how little the hardware has changed over the last couple of decades. The V1 is using the same hardware they’ve had since launch, with increasingly more complicated sorting algorithms. The V1 prides itself on being an all in one product, but I feel like that is more of an excuse for their less than amazing app. The Escort range boasts algorithms that are nearly as good, augmented with modern features that make even their cheapest builds on par with anything coming out of Valentine.

Sounds like I’m gushing a bit here, so it’s probably best to move on to the actual review. The lower end Escort radar detectors have got a few issues, lest you feel I am being overly complimentary to the build. The range is a little lacking, and the core design of their products, in terms of aesthetics, is really not for me. So let’s move on.

It is almost harder to write about the escort builds than any other on the market. They are so well put together in terms of feature set and use that I end up with a couple of hundred less words per piece, and seen as I get paid by the hundred that cuts into my bottom line. Still, the issue is at its peak with the high end builds, which become more a list of awesome, than a nit pick fest. thankfully the X70 is a lower end build, so there is some missing things for me to complain about.

The look of the build is far from the most important thing, but I tend to start here, simply to get it out of the way. I don’t know what it is about the Escort builds. They are so fully featured, and day to day use is so easy that the fact that I think they look more like 80’s clock radios than modern high tech pieces of equipment leaves me disappointed. It’s a small thing, but I hope in the future they pay attention to the aesthetics of their products a little more. You are spending a couple of hundred dollars on them, they can at least look the part.

The feel on the other hand is wonderful. You won’t be holding it in your hand often, but when you do you will be struck by the heft, the quality and the apparent durability. It feels like it can take some damage and come up smelling of roses, and I like that in my electronics. The mute button is on the body, and for those few false positives you want to silence that can be a hazard, Escort have thought of this, and so have placed a second one on the charger cable, making it much safer to switch off the sound. I wish more firms would do this, just for the added safety.

The lack of Bluetooth is a bit of an issue. It means you will have to connect it to your phone with a cable, and that removes the charger cable, and thus the mute option. It also lacks on board GPS, so in order to take advantage of the updated maps you will need to plug it into your phone for most of the journey. An oversight perhaps, but not a major one. So long as you have it programmed and set up right it should be fine.

The app that comes with all of Escort’s products is one of the most fully featured on the market. There are reports of iOS issues, but these are few and far between. It allows you to augment the smart learning system already in the radar detector, with a real time list of hot spots, fed with information from all other Escort users. This kind of data collation is always impressive to me, and it give Escort a huge advantage over the competition. The mounting bracket is escorts standard quick release magnetic lock bracket. the suction cup is sticky for added firmness, there is no better on the market.

The laser detection system that comes as standard is a bit hit and miss to me. There is no build out there that is infallible regarding laser speed cameras. Lasers are point to point, with a little dispersion. In most cases by the time the sensor goes off you’ve already been hit with the laser, or the car in front of you has, rendering the warning useless. Side point, laser jammers are not illegal yet, radar jammers are so be careful what you buy.

Overall this is an impressive build. It has all the features that i want to se in a package that is priced appropriately. There is little in the more expensive builds, beyond range and a few other in the box features, that you might find yourself coveting if you go for the cheaper build.

I have so few opportunities to look into the law regarding the products I review, for the most part it’s unnecessary. We all know what most are going to use these for, so it is best to be informed and stay safe. If you are an international reader know that for the most part radar detectors are illegal. You can’t even drive up into Canada with one on, so bear that in mind. For most of the US you are covered by the 1935 US Communications Act, so long as you are not using it in a commercial vehicle. There are a few states with laws that differ, DC and Virginia to be specific. You also cannot use them in and around US military bases. Finally, Minnesota and California both have state laws regarding what can and cannot be placed on a windshield, so please find an alternative place to put it for those states. Oh, and as I mentioned, radar jammers are always illegal, though laser jammers are not, and pro tip Laser jammers offer far more consistent protection than detectors.

With every other Escort brand detector I have reviewed the price section is where we come across most of the issues. The software on offer here is top notch, and well worth the price, but for some it’s too high. With the X70 is a touch cheaper, sitting right around the $300 range. That said you can usually get it with a discount automatically applied at Amazon.com by clicking here. I find it to be perfect. Considering what you get, and when we look at the prices of their other products,. you are buying not just a radar detector, but a safety net that spans the country, so well worth the asking price.

And the warranty. escort offer a standard one year warranty. it covers what you might expect, manufacturer defects. I maintain than any radar detector that stops working with normal use within a year is automatically faulty, and I suggest you use that argument. They also offer an extended warranty, but you are better off ignoring it. One thing I love is the Performance Guarantee, if you get a ticket they will pay for it. It’s a gutsy move, and one I feel will pay off in the long run for the firm. There are of course a few limitation, it has to be for speeding for some reason but I feel the terms are fair.

The price might be high, but you really do get what you pay for. Add in the decent warranty, and the excellent performance guarantee, and we have a very attractive package.

There is a lot to like about this build. I have been reviewing these things for a while, and I have yet to find so fully featured a low mid range build from anyone. The range could be better, but that is offset by the app integration, which is getting better day by day. The smart cable that comes as standard allows you to fine tune your experience on the fly, in a far safer manner than any other radar detector. The only issue for some will be the price, which is a touch on the high side. I feel it is worth getting this over the cheaper models, if only for the added features. They really do change the whole experience, elevating what would have been a simple build ten years ago, into one that is fully featured and accurate.

To automatically take advantage of all the current coupons and discounts available at Amazon.com you can click here.