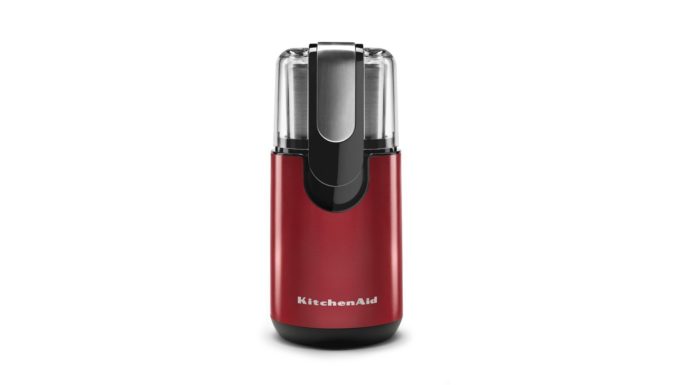 After last weeks Capresso build it would take a miracle for a coffee grinder to impress me. The KitchenAid does its best, but it simply isn’t in the same league as the Capresso. That’s not to say that it isn’t worth your time, quite the contrary, just pointing out that when I do the top ten lists this one won’t be top of my must buy list. For a start it’s a bladed grinder, which never bodes well.

So let’s get my personal disclaimer out of the way. I am not a coffee drinker. I get my caffeine fix from other sources. But I did spend two years as a barista, and my partner is an avid consumer of coffee. At home I use a moka pot to make the drinks. A great option, especially for espresso lovers out there, but that does give us a problem. Coarse grinds tend to lead to lesser drinks, I am paying attention to the product that comes out of these grinders and offering alternative brewing methods in each review.

Grinders can grind anything. It’s in the name. So when you buy a grinder you can use it for more than simply coffee. I am a cook, so I use a bladed grinder to make all kinds of spice mixes and rubs. You can use a burr grinder to make spice mixes, but the difficulty there is in the cleaning. Cleaning a bladed grinder is way easier than a burr grinder. You have to take into account what you want to do with the grinder before you purchase one.

Continuing my series of reviews on the top selling grinders on Amazon, this weeks KitchenAid build intrigues me. It can’t match up to the other brands, the burr grinder builds, but it has a number of very positive qualities, that make it perfectly suited to a multifaceted role in the kitchen.

I test out three grade of bean coarseness. Coarse, medium and fine. You tend to fine with the coarser grades that they don’t do well in the moka pot, generally. However, in cases where the grind is uniform you get a pleasantly light coffee drink. Let’s see how this grinder holds up under scrutiny.

So let’s get to the build. Off the bat, this is one of the best looking designs I have seen in a long time. I don’t know what it is about the bladed grinders, but the vast majority of them look far and away better than their burr grinder counterparts. Cleanly designed, that chrome finish at the top makes a nice contrast to the red body. You can get other colors, black and stainless steel, and they all look amazing. The stainless steel one is my favorite, but it was too expensive for me personally. The added heft of the metal finish is what I look for myself. In terms of features you will have to look elsewhere. Bladed grinders don’t have a coarseness setting, nor even a timer for most of them. This is due to the fact that the fineness of the grain is dependant on how long you hold the button in.

The top section holds 12oz of beans, so enough for around 12 cups. I always stress the fact that fresh ground beans lose much of their flavor after about ten minutes, so unless you have the powers of the flash it is best to grind to your means. There could be more heft to the base model, at 3 pounds the thing is a little light for me. The stainless steel model alleviates this issue, but it is very present in the cheaper models.

I would like to take a minute here to talk about the issue with bladed grinders. Bladed grinders tend to not leave the ground coffee uniform. If you use a drip coffee maker or a french press then you are going to want a coarser grain, and with the bladed grinders you simply cannot have anything close to the same size particles. It’s the reason burr grinders are preferred by most coffee snobs. A uniform particle will release its flavor and chemicals all at the same time, so you don’t need to worry about too weak a brew, or too bitter a brew. This issue slowly disappears the longer you hold the button in, as there is a limit as to how small a particle can get in a bladed grinder. This makes it pretty god for an espresso machine or a moka pot, but still not ideal.

At the end of the day you know what you want. I personally want something that can do a lot of things in the kitchen, and still make a fine grind that works in the moka pot. I am very impressed with the versatility on offer from the KitchenAid, and aesthetically it is amazing.

On to the coffee itself. If you have read my previous reviews you know how this section is to go. I grind the beans into three neat piles, add them to the moka pot and make the latte, then my partner taste tests the resultant concoction. My core drink is the latte, more specifically I make low calorie lattes. That”s skimmed milk, vanilla extract and stevia, added to the moka espresso. Getting the grind to the three prerequisite grains of fineness required a timed blitz. 10 seconds, 20 seconds and 30 seconds. I later made a drink from a 60 second blitz too.

I love my moka pot. They make making coffee so much easier. When I worked as a barista I wanted a way to test out drinks at home, so as to not serve a substandard beverage to a customer. I didn’t want to spend hundreds of dollars on a home espresso machine, so I found this great alternative. The reason I cite moka pots as the best alternative to espresso is down to the cream layer. A real espresso has a crema layer, so too does a moka pot coffee, but only if you do it right. I use the Bialetti mini, and a Bialetti stove top milk foamer, the pair of items combine to let me practice making lattes, mochas and macchiatos at home.

So I made the drinks. The ten second blitz caused me some concern, the chunks where all giant, and very far from uniform. That drink got an emphatic no from my significant other. The 20 second blitz fared little better. It wasn’t until the 30 second blitz was tried that we got a drink that was worth finishing, and even then, the flavor was weak. My final try, with the “Just hold the button in for ages and see what happens” blitz was very well received. The particles were mostly a fine powder, though not so fine as to drop through the holes of my moka pot. In the end we got a drink that was well worth drinking, can’t ask for fairer.

I know I’ve said it before, but the method by which you make the coffee will dictate the coarseness of the grind. If you are using a french press then maybe the ten second blitz here will make a very passable cup of coffee. Same with the medium grind and a drip machine.

So after weeks of avoiding the spice I dove once again into the wonderful world of spice rubs. I grabbed a few pork chops and made ready to grind up a selection of complementary flavors. Paprika, sugar, salt, garlic, coarse pepper, onion, fresh chilies, the works. I ground it all up made some of the most delicious chops I have ever had the good fortune of eating. Granted, I love my own cooking, but still. The issues arose when I tried to clean the grinder. Getting the residue out of it was a breeze, just clean it in the sink after taking it apart. The issue was the chili scented coffee grounds. So, I took a slice of white bread and ran it around the bladed, held for about thirty seconds, and it worked well to remove the smells.

Now we have to look at the price.The KitchenAid has many short comings but the price is not one of them. It can usually be had for somewhere between $35-40 but the price tends to vary. To check the current price with all the current discounts applied click here. The KitchenAid is not the cheapest I have seen, but at this price point the KitchenAid is certainly one of my personal favorites on the market right now. It might not be the fanciest, but it gets the job done.

Let’s get that major downside out of the way first. It is a bladed build. For those out there that want to the best of the best, something that can grind coarse to fine with perfect, or near perfect uniformity, this is not the product for you. For those who only want the grinder to do a fine grind, and have it free to use for spices and other kitchen uses, this is the one to beat. It looks great, and it does what I need.

To check out any available discounts for the KitchenAid Blade Grinder click here!