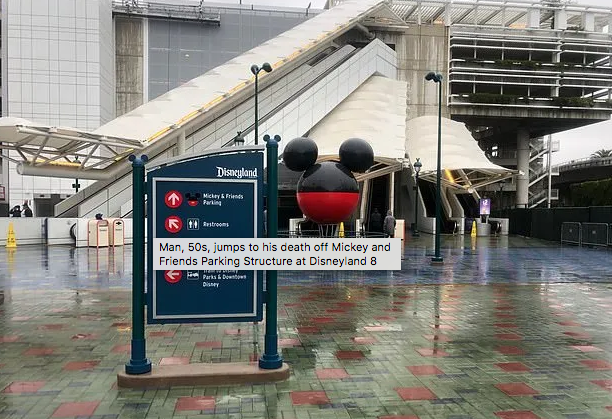 A 51-year-old man, later identified as Christopher Christensen, the principal of a Huntington Beach elementary school, has died after allegedly jumping from the Mickey & Friends parking garage at Disneyland. According to Anaheim Police, the 9-11 call came in just before 9 p.m.

When officials arrived, they found them deceased; Orange County Coroner later confirmed him as Christensen. As a result of the incident, some services at the park were disrupted, including the trams, which many guests reported were shut down via Twitter. Anaheim police later confirmed that Christensen had not entered the theme park prior to jumping.

The incident happened on the same day as CEO Bob Iger’s visit to Disneyland, where many guests were seen cheering and clapping in videos that were later uploaded to social media. Iger had recently taken over last month after it was announced that Bob Chapek will be stepping down.

The seven-story garage, which features connecting shuttle services to the park, was first opened in 2000. Since then, several individuals have died by jumping from the structure. In 2010, a 61-year-old man fell to his death and in 2016, a 40-year-old man died after jumping from the garage.

In an email sent to the school community, Katherine Stopp, the Fountain Valley Superintendent, stated that “[he] has been a respected leader for over 20 years” in the school district and that “his contributions are immeasurable.”

In a Facebook post that he wrote, which doubles as a suicide note, he revealed that he had been put on administrative leave at work after getting into an argument with his wife, one that “landed [him] in jail that night.” He faced charges of child battery and endangerment and was due in court on Monday. He had pleaded not guilty.

While Superior Court Records have not detailed the exact allegations, the acts allegedly happened on November 15. Christensen was posted on a $10,000 bond and subsequently released on November 17.

The 51-year-old is survived by his wife, two stepchildren, and three adult children.