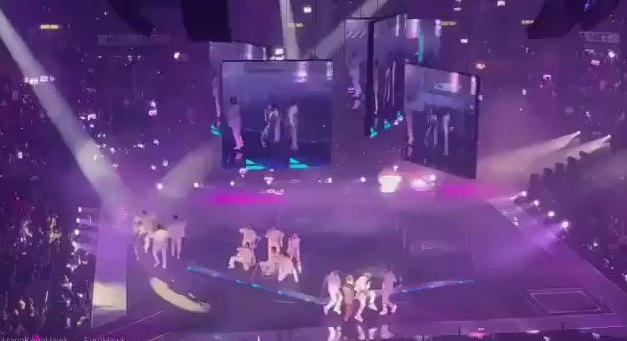 Two dancers were injured after a giant video screen fell and crushed them during a live performance by the boy band Mirror. The monitor, which was sixteen-by-ten feet, landed on the neck of 27-year-old Mo Lee Kai-Yin, before toppling on 29-year-old Chang Tsz-Fung. The incident happened at approximately 10:30 pm at the Hong Kong Coliseum.

Videos of the horrific incident have since surfaced on social media. The footage shows one of the many video monitors above the stage coming loose and landing on the dancers while they were performing. The concert was stopped shortly afterward, with the band’s manager coming onstage to address the worried audience.

Both dancers were immediately rushed to Queen Elizabeth Hospital, where it was determined that Lee had dislocated the third and fourth sections of his cervical spine. He also suffered injuries to his head and lungs, though the extent is currently unknown. He immediately underwent surgery on his vertebrae and has since undergone another eight-hour procedure. According to a medical insider, the surgery managed to stabilize his spine, however, he is now incubated. His condition remains critical.

Several audience members were also taken to the hospital, where they were treated for shock.

Hong Kong authorities have since launched an investigation and have been in contact with the concert’s organizers. According to Kevin Yeung, the city’s secretary for sports, culture, and tourism, the video monitor fell after a metal suspension cord snapped. He also stated that they will be working with other departments and professionals to determine the exact cause of the incident.

This was not the first incident that happened at the coliseum. Earlier this week, a performer fell off the stage during a concert but fortunately, was not hurt. Soon afterward, fans launched a petition calling for increased safety measures for the band’s shows. By July 29th, it had already gathered over 13,000 signatures. The Hong Kong government also revealed that it had asked MakerVille, the company that organized the concert, to “reveal and improve” their safety measures a day prior to the accident.

Since then, they’ve announced that all remaining performances will be canceled. Refunds will also be issued to those who were at the performance on July 28th.

The popular boy band, Mirror, was put together through a reality TV series in 2018. Not only are they credited with reviving Cantopop, but they’ve also helped cheer up the city, which has experienced tensions with mainland China.