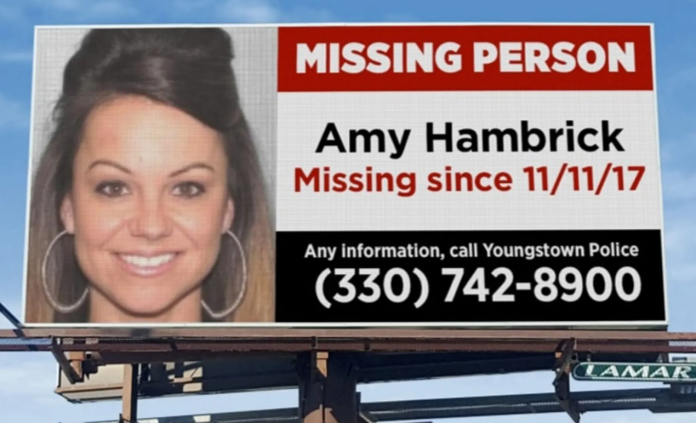 A woman in Ohio stumbled upon a set of skeletal remains while searching for lost dog in the woods. According to police, the remains were found in a wooded area on the east side of the city, along Thorn Hill Road, approximately ten miles west of the border.

The dog owner made the decision to take the remains home and promptly notified authorities, who subsequently transported the bones to the local coroner’s office and launched an investigation.

On Tuesday, September 13th, the police announced that the remains had been identified as those of Amy Hambrick, a 29-year-old woman who had disappeared from the city’s west side back in November 2017.

Given how long it’s been, it was not an easy task to identify the remains. The bones were ultimately sent to the anthropology department at Youngstown State University, where they were examined and assembled by Dr. Loren Lease and her team. They had quickly determined that the remains belonged to a female, but it had taken some time for them to identify the remains. In the end, they matched the teeth and jawbone from the recovered skull and using dental records, determined that they belonged to Amy Hambrick.

According to Police Captain Jason Simon, Hambrick was last seen on November 11, 2017. She had left Youngstown to visit a friend in North Jackson but never made it and was never seen again. Police had used cadaver-searching dogs, interviews, and warrants on electronic devices to try and locate her, but were unable to find any leads. The case eventually went cold.

Despite that, her family has desperately continued searching for her. Hambrick also left behind a daughter, who was ten years old at the time of her disappearance.

While her remains have now been located, there are still questions as to what exactly happened that led to her death and how she ended up in the wooded area. For now, the cause of death is listed as undetermined as the investigation continues. Simon also asked the public for their help with determining Hambrick’s last known whereabouts.

Three of Hambrick’s family members were present at the press conference, which took place on Tuesday morning. Once officials were done speaking, they were ushered out of the area by Mayor Jamael Tito Brown so that they would not have to face questions from the media. Simon also said in a statement that they have asked for privacy at this time.

The discovery of Hambrick’s remains brings the Youngstown Police Department’s list of long-term missing people cases to fourteen. Simon has urged anyone with information about the case to contact officials.