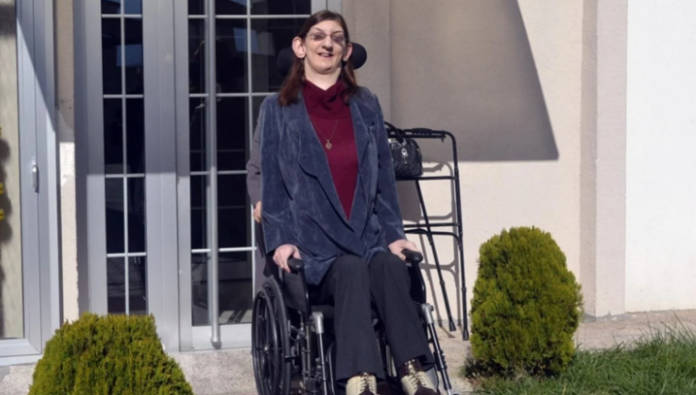 Rumeysa Gelgi, the tallest living woman in the world, recently boarded an airplane for the very first time to fly from her home country of Turkey to San Francisco. While the airline did their best to modify the seats, the issue of accessibility still stands. If anything, the ordeal has only highlighted the lack of accessibility for those like Gelgi.

The 25-year-old woman, who stands at 7 feet and 0.7 inches tall, was diagnosed with Weaver syndrome as a child. A rare genetic condition, it causes bone overgrowth, which has resulted in her extraordinary height. Since her teens, she has held several sized-related Guinness World Records, including the longest back on a living female and the longest fingers on a living person.

Not only does she spread bay positivity on social media, but she also travels regularly to share her story. Having said that, she has never blown on a plane before. Like most people with her condition, she relies on mobility aids such as wheelchairs and walkers to get around. Because of her large frame, however, it’s very difficult to do on a long flight—unless the airline is willing to make special accommodations, which they offered to do for her recent flight.

It happened back in September but it wasn’t until a few weeks later that Gelgi shared photos of herself aboard Turkish Airlines in an Instagram post. She explained that it was made possible after the airlines removes a few seats on the plane; this allowed her to rest comfortable on the stretcher during the 13-hour flight to San Francisco. It was “a flawless journey from start to finish”, she wrote in the description. She also praised the staff and medical personnel of Turkish Airlines for their work and said that “[the flight] certainly won’t be [her] last.”

In the photos, Gelgi can be seen talking with the staff aboard the plane and enjoying what appears to be a first-class meal.

Gelgi, who works as a computer programmer, has stated that the purpose of her trip is to travel to California to work with Guinness World Records.

Making Flights More Accessible For Those With Physical Differences and Disabilities

Historically, flying has been inconvenient at best for travellers like Gelgi. According to the International Air Transport Association, who sets global standards for air travel, “[they] are devoted to ensuring everyone can enjoy the freedom of air travel”. They also stated that she expects stands in airports and airplanes “to be consistent so that the same type of assistance can be offered to everyone.”

Currently, one of the biggest priorities is to make it so that accessibility is built into the very structure of buildings, instead of being treated as a modification or addition. They also said that they’re trying to improve procedures and infrastructures around the transport of mobility aids, which is often a struggle for those who require them.