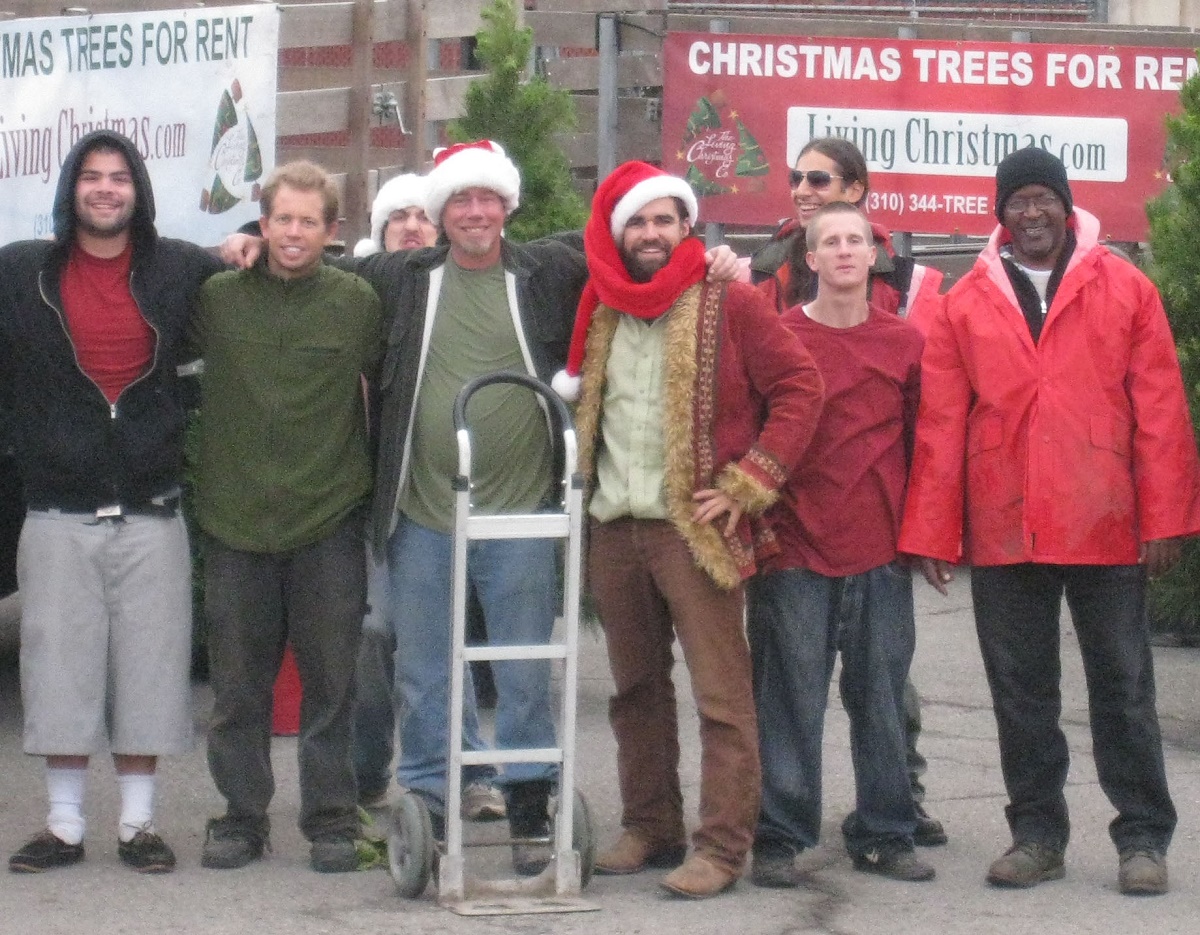 Scott Martin, the owner and founder of The Living Christmas Company, could bring holiday cheer to even the most miserly of scrooges. His business model was a new take on an old Christmas classic: the tree. How often do we go through the hassle of chopping down a tree, only for it to whither in the corner or die on the street after the holidays? This travesty led Martin to start The Living Christmas Company, emphasis on living. Rather than chopping down a tree, buying a tree from a farm, or, the horror, using a plastic imitation, customers would rent living trees from Martin. He had a team of “elves” deliver them to houses and pick them up after Christmas. Despite the innovation, The Living Christmas Company was small, and Martin needed help from the sharks to scale his business.

Doing nothing more than walking into the shark tank through his forest of living trees, Scott Martin brought a smile to every face in the room. Sporting an odd combination of a button-up shirt, an extra-long Santa hat, and a handlebar mustache, Martin looked a bit like an elf himself. Scotty Claus (as he introduced himself) was willing to offer a shark thirty percent of his company for one hundred fifty thousand dollars. Would his valuation of five hundred thousand dollars stand up in shark court?

Befitting the costume and holiday cheer inherent in the business, Martin had to tell the tale of The Living Christmas Company. He traced his passion to seventeen years-old, when he landed a job delivering Christmas trees. He couldn’t get enough of the happy customers, the beaming children, the “milk and cookies.” Of course, this joy was hampered by the sight of these once-sprightly trees dying on the pavement two weeks later. Then, it came to him, the idea to deliver trees for Christmas and pick them up afterward. This idea became a business in 2008, when Martin rented one hundred trees. Over the years, one hundred became one thousand three hundred. With an investor and partner, Martin hoped to create a premium growing environment for his Christmas trees and take the business national. Eventually, it could change the way the country celebrated Christmas.

Robert may have had visions of sugar plums, but he needed the numbers, too. Each tree rented for between one hundred and two hundred dollars. Barbara and Daymond were skeptical about the price point. Most “disposable” trees sold for this amount or less. What else did he offer? According to Martin, The Living Christmas Company was more than just a tree in a container. It provided a service and an experience. It cut out the inconvenience of finding and transporting a tree. Instead, an elf from his team would drop it off, recreating his idyllic seventeen year-old heaven. Daymond disagreed. He saw picking out just the right tree with the family as integral to the Christmas experience, but Barbara wasn’t so sure. “Only for the first five years.”

Mark asked Martin to walk him through the process. Customers visited The Living Christmas Company’s website and chose from five different types and sizes of trees. They would then be delivered by a member of a team of elves largely consisting of military veterans. Of course, each had a Christmas-themed name. Justin Season and Greg Nog numbered among Martin’s ranks. Specific trees would become a part of the new holiday tradition. Families would rent the same trees every year, and each tree would develop its own story. Scott Martin was running a green business that brought holiday cheer and employed veterans. If investment decisions were based solely on conscience, what more could a shark ask for?

Well, sales. Sales would be nice. That’s not to say The Living Christmas Company had no business at all. Still, one hundred fifty thousand dollars in total revenue and thirty-three thousand dollars of profit (before Martin payed himself) wasn’t much. Robert, evidently a developing sociopath, asked if he had to pay if he killed a tree. After most likely taking a few steps back, Martin answered that this would put Robert on the naughty list and incur a fine. Scotty Claus kept a close eye on Robert for the remainder of the presentation. Of course, by renting from Living Christmas, a customer would be paying a premium for its green business model. Most of these customers could be expected to take care of the trees.

If Martin did secure an investment, where would it go? In two words, capital and infrastructure. Specifically, he mentioned a nursery with an automatic irrigation system, the ability to foster his trees from saplings, and a place to keep his inventory. Kevin didn’t give Martin the time to go on, declaring “Let me tell you all the ways I hate this business.” His objections, in short order, were that the business was seasonal, it only catered to the environmentally conscious, and that it had too much competition from plastic trees. Twisting the knife, he repeated “I really hate it” and left the deal.

Daymond also wasn’t crazy about the business, but his criticism was more constructive. After complimenting Living Christmas’ green business model and Martin’s handlebar mustache, he laid out unanticipated costs moving forward. Mainly, with the price of gas on the rise, costs of doing business would skyrocket. Since the cost of major inputs – labor, gasoline, and water – wouldn’t decrease as the business grew, it wouldn’t become instantly more profitable with size. He also brought up challenges associated with pest and animal control. Despite Daymond’s shared love of trees and facial hair, he had to back out.

Robert and Barbara were the next sharks to pass over Martin and The Living Christmas Company. Robert kept things simple, as usual, simply saying that he didn’t see the growth potential. Basically, he echoed Daymond’s point that there wasn’t much potential for an economy of scale. Martin’s nerves after seeing three sharks reject his business may have encouraged the fourth. Lost for words, he reiterated the green side of the business, as well as its convenience.

Worst of all, he alluded to the size of the market, which he pegged at two billion dollars. This may seem wise at first, but it tends to put Shark Tank investors on edge. The entrepreneur using this tactic believes that a fortune can be made by taking over only a small portion of a huge industry. However, all it does is allude to the size and competitiveness of the market. It says nothing about any specific business and even suggests the idea that taking a relatively small market share will be easy. Basically, it’s bad form. In this case, it led to Barbara questioning Living Christmas’ profits. Thirty-three thousand dollars annual profit after four years in business may be enough for a passion project but not for her. She bowed out.

Only Mark was left. Martin wised up and began to speak in terms of something any investor can understand, value. By pioneering the tree rental space, Martin was able to reuse trees and rent them again next year, when they would usually be thrown away. He turned waste into profit. Beyond that, he was providing value to the community. Despite its humble size, The Living Christmas Company provided a dozen jobs to people in dire need of them. “Having a business that is able to give back and make money is meaningful,” he claimed with gusto. Could it be? Was the Christmas spirit taking the place of Mark’s investor instincts? Martin used another word Mark could understand. “I set this up as a for-profit company to do well by doing good.”

From the looks of things, Mark was ready to take the chance. “I’m a believer in convenience with a conscience,” he admitted. It was true, The Living Christmas Company had its risks and weaknesses. Martin would need to be flexible on his pricing and utilization of capital. Before committing, Mark needed the number of jobs he would help to create with the deal. Two hundred. This number shifted the scales, and after some urging from the other sharks, Mark offered the one hundred fifty thousand dollars for forty percent. At only ten percent more equity than Martin proposed, he didn’t need long to think it over. After accepting, the two pair quickly launched into a bear hug, followed by an impromptu business planning session. A compliment from Mark captured the moment perfectly. “Money’s easy. Doing the right thing isn’t.”

At the end of the day, Scott Martin landing a deal may just have been a Christmas miracle. He entered the tank with low sales figures, a seasonal business, and an untested business model. His success proves the power of a good story. It’s true that his trees wouldn’t be the cheapest, but he had found a way to connect with his customers and give them a feeling they couldn’t get anywhere else. To his employees, his customers, and probably Mark himself, Martin’s attitude and business idea perfectly captured the spirit of Christmas.

The Living Christmas Company in 2018 – How They’re Doing Now

Two seasons later, Shark Tank allowed us to check back in with Scott Martin. He reiterated that the Shark Tank deal was a “Christmas miracle” for him and his environmentally, socially conscious business. In the original episode, Martin emphasized the importance of working with veterans, and Mark’s investment has allowed him to expand this model. He is now working directly with the Department of Labor to hire as many veterans as possible.

With The Living Christmas Company’s brand new forty-acre lot, the business has expanded dramatically. Each tree is now supported by a high efficiency drip irrigation system, meaning very little waste. Since teaming with Mark, Living Christmas has grossed over half a million dollars as of 2014, with about three hundred thousand in projected sales for that year. A new partnership with Whole Foods Market has also developed. Living Christmas trees made their first appearance in five test stores in 2014. “I can’t tell you how great it is to be Scotty Claus,” he beamed.

News since the Shark Tank update has been spotty. The Living Christmas Company has stayed up to date on social media, but several pages on their website seem to be out of commission. March is definitely the company’s off-season, so it’s understandable, but as of now, there is no way to determine the company’s rental radius. Have they gone national like Martin dreamed, or are they staying local, in southern California? On the other hand, Living Christmas did earn a shout-out from the Long Beach Business Journal in an article suggesting ways to be environmentally conscious during the holidays. As of now, Living Christmas’ future is uncertain. It seems like only time will tell if Martin’s business will continue to grow or if it will wither and die like Kevin O’Leary’s cold, dark soul.