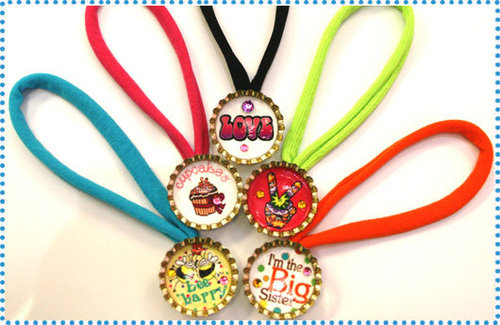 Maddie Bradshaw has always been a very creative girl. She is a very hands on kind of person who enjoys investing a great deal of her time into arts and crafts. This passion is what ultimately fueled her idea for M3 Girl Designs. When Maddie was just 10 years old, she started out by simply making magnets for her school locker out of bottle caps. At first it was just her friends who wanted to join in on the new trend, but later the demand for her creative bottle cap accessories expanded. The rapidly growing popularity of her magnets pushed Maddie to get even more creative with this concept. M3 Girl Designs later began to produce jewelry products that incorporate bottle caps, such as necklaces, hair ribbons, and many other products.

Of course Maddie wasn’t the only one running her new business. Maddie’s mother, Diane, obviously helped to support the business financially and her little sister, Margot, was always there to help make the merchandise. These three women worked incredibly hard to make something out of M3 Girl Designs, but because neither of them knew much about marketing or even running a business, it seemed like a smart idea to find an investor who did. That was why Diane took her two girls and their business to the Shark Tank

The three Bradshaw women enter the Shark Tank and begin by stating their listing price of a $300k investment in exchange for 15% of the M3 Girl Designs company. Then Maddie steps up to the plate to explain where this jewelry business came from and what it’s all about. As mentioned earlier, Maddie tells them that she originally got the idea for M3 when she wanted magnets for her locker. When she couldn’t find anything that really fit her style, she took bottle caps from her uncle’s old Coca Cola machine and used those to create magnets. The designs inside the caps are all her own artwork that she places inside of them, and then she simply stuck a magnet onto the back of the bottle cap.

It didn’t take long for her friends to notice and eventually their enthusiasm over them brought Maddie to believe that she had invented something that was worth expanding. That was when she created “snap caps” which are magnetic pendants for necklaces that can easily be switched out or replaced. Margot hands out samples to the Sharks while Maddie tells them that the owner of a local toy store in Texas agreed to sell these bottle caps and necklaces. Within two hours of having them in stock, they were all sold out.

However, since Maddie is 15 years old now, and apparently more sophisticated in her style, she handed down the Snap Cap jewelry line to Margot while she went on to create the Spark of Life line. This new line of jewelry consists of adjustable necklaces and bracelets that are made out of neutrally colored beads and brightly colored heart or peace sign pendants. M3 Girl Designs have been selling their products for approximately 5 years and are now supplying around 1000 stores in total. During these 5 years they managed to make around $6 million in sales, but during the last year alone they made $1.6 million.

So basically, Maddie is a 15 year old millionaire, and her talent doesn’t stop there either. She actually authored a book titled Maddie Bradshaw’s You Can Start a Business, Too! which is a book about encouraging young people to chase their dreams and to not be afraid of starting their own business, because they are perfectly capable of doing it. While Margot passes out copies of the book, Robert Herjavec asks how they were able to start supplying 1000 retail stores. Maddie explains that it all started through word of mouth really. After they started selling in the first couple of stores, other places started approached them with business deals. Then they eventually received enough attention to hire a sales representative to help them expand even further.

Fast forward to a couple years later, they now have around 10 sales representatives and still continue to make all of the products handmade at their office in Texas. Lori Greiner points out that the Snap Cap line is what made M3 Girl Designs a multi-million dollar company, but Diane speaks up to say that they are not a one hit wonder, but rather a growing business. That is why they want to branch out and make a new mature line for kids closer to Maddie’s current age. Greiner also points out that it has recently become difficult to sell jewelry within the current economy, but this doesn’t prove to be an issue because their most expensive item sells for around $10 dollars.

Moving on, Herjavec is curious as to why Maddie needs the money when she has already made a million 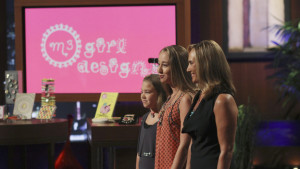 dollars off the company. With the $300k, she wants to begin distributing the products globally in addition to using this new partnership as an opportunity to take M3 Girl Designs to the next level on the market. Kevin O’Leary is the first Shark to put an offer on the table. He is willing to give them the $300k, but wants 30% of the company. Immediately after he makes this offer, Greiner decides that she will go in on the deal with him so long as he becomes a silent partner, their stake in the company is bumped up to 40%, and that the girls allow her to mentor them. She wants to introduce them to QVC and teach them how to become successful business women. Get one-to-one writing help from custom essay writing service ThePensters.com

Before they think too much about that particular offer, the girls want to hear what the other Sharks might want to put out on the table. Daymond John is known for his business in fashion, but he doesn’t believe that he could really be of any help to them, so he decides to drop out. Mark Cuban then takes his turn to make an offer. He wants to go into a deal with Greiner, because he believes that she has a lot of useful assets, and together they will give the girls $300k in exchange for 30%. This new deal is definitely better than the last one, but Herjavec hits the nail on the head when he says Maddie’s lack of enthusiasm stems from having to give away 30% of her business. Even though he is the one to point this out, Herjavec ultimately agrees to go in on a deal with O’Leary that is identical to the deal that Cuban and Greiner made.

After some brief discussion, it is decided that they want to go in on a deal with Herjavec, Greiner, and Cuban, but they want to lower the stake in the business to 20%. At first Maddie says that there is no going higher than that, but when the Sharks say it’s too low a percentage, she changes her mind. The Sharks can have the 30% so long as they are all free to go to Mavericks games whenever they want. Without even really thinking about it, Cuban accepts this deal and all three of the Sharks go shake hands with the Bradshaw ladies. 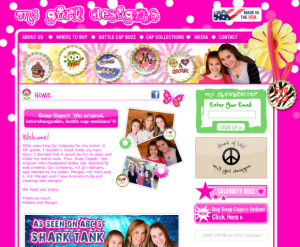 After appearing on the show, M3 Girl Designs was headed straight towards success. Their products were being sold in more stores and they later hired a handful more sales representatives. Maddie continued to propel the business forward by creating various social media accounts to promote the products. It seemed like nothing could go wrong with the Bradshaw’s because of their rapidly growing brand name, but all good things must eventually come to an end.

M3 Girl Designs started to face issues when they began to file lawsuits against various companies that they claimed were infringing upon their trademark. Apparently these claims were all false because they didn’t own a trademark or patent, but most of the companies which they brought to court decided to just settle rather than draw out the whole legal process. It was during a trial against Blue Brownies when new truths were exposed. Maddie Bradshaw claimed that she was the inventor of the bottle cap jewelry designs and it was clear to everyone in the court room that her testimony was extremely staged. By the end of the battle, it was declared that none of the Bradshaw’s were telling the truth and the ruling ended up not being in their favor.

Since then, things have quieted down for the M3 Girl Designs business. There hasn’t been a post on their Twitter since June of 2014 and their official website has been taken down. Clearly the girls couldn’t handle all the pressure, so they ended up backing down and closing shop. At least they managed to make a few million before it happened.