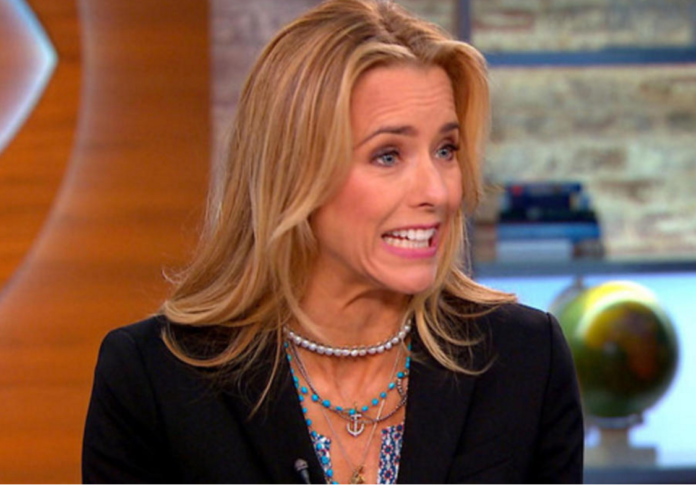 American actress Tea Leoni has starred in several high-profile films throughout her career including Bad Boys (1995), Deep Impact (1998), and Jurassic Park III (2001). Hailing from New York City, she first ventured into the show business after being dared by a friend to audition for a television series. While she was offered the part however, it never ended up airing. Nonetheless, the experience motivated her to try out for more shows; before long, she had landed a recurring part in the NBC soap opera, Santa Barbara (1988). A couple of years later, Leoni made her film debut in the comedy, Switch (1991). Continuing to hone her acting skills, she eventually appeared in A League of Their Own (1992), Flying Blind (1992), The Counterfeit Contessa (1994), and Wyatt Earp (1994). Six years after stepping foot into the industry, she received a big movie break in 1995ーshe was cast as the female lead in the action movie, Bad Boys alongside Will Smith and Martin Lawrence. Leoni’s first major box office success, it gave her the boost of fame that she needed to land bigger roles in the subsequent years.

In terms of the small screen, she soon found herself playing a series regular in the ABC sitcom, The Naked Truth (1995)ーit was her second time starring on television, her first being in that of the short-lived comedy, Flying Blind (1992). Following the end of the show, Leoni began focusing her attention wholly towards film. In 1998, she was cast as one of the lead characters in the blockbuster, Deep Impact. Since then, she has starred in several other movies such as The Family Man (2000), Jurassic Park III (2001), Hollywood Ending (2002), and Fun with Dick and Jane (2005), to name a few. The winner of a Saturn Award (e.g. Best Actress), the blonde has received sundry nominations over the years including two for the Blockbuster Entertainment Award, and ones for a TV Land Award and a People’s Choice Award.

More than a decade after her departure from television, she returned for a series pilot for Spring/Fall in 2011ーhowever it remains unsold to this day. Since then, the actress appears to have transitioned away from film; her last film role being that of a Special Agent in the heist comedy, Tower Heist (2011). As of 2014, Leoni has been starring in the political drama, Madame Secretary. To date, the artist has taken on over twenty five different roles on the screen. Aside from acting, she has also been invited onto a number of TV talk shows such as The Tonight Show with Jay Leno (2000), Ellen: The Ellen Degeneres Show (2006), Late Night with Conan O’ Brien (2004), and Larry King Live (2010).

So what has the accomplished actress been up to these days? What has she been working on as of late? What are the latest endeavours that she’s picked up? What happened to Tea Leoni? Where is she now in 2018?

Tea Leoni’s Childhood and Eventual Entry into the Show Business 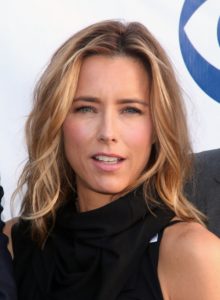 Born on February 25, 1966 in New York City, New York, Tea Leoni (Birth Name: Elizabeth Tea Pantaleoni) is the daughter of Emily Patterson, a dietician,and Anthony Pantaleoni, a lawyer; she is of English, Italian and Polish descent. Growing up in New York City she went to an all-girls private school called Brearley School for a few years before transferring to The Putney School located in Vermont.

Following her graduation, Leoni went to Broxville’s Sarah Lawrence College briefly before dropping outーafter which she spent a bit of time in the Carribean. At the age of twenty two, she decided to attend an audition for a television show after being dared to do so by a close friend. Although she ultimately received the part, the series never ended up airing after several production delays. Having said that, the experience did motivate her to pursue further acting opportunities.

Just a year after her initial audition, Leoni landed a role in the NBC soap opera, Santa Barbara (1989)ーit also marked the first time that she appeared on television. From there, she eventually made her big screen debut in the comedy, Switch in 1991. Determined to make it big, the aspiring actress continued to put herself out there; before long, she had appeared in various small roles in A League of Their Own (1992), Flying Blind (1992), The Counterfeit Contessa (1994), Wyatt Earp (1994), and Frasier (1994). In 1995, six years after her official acting debut, she received a big break when she was cast as a leading character in the action comedy film, Bad Boys alongside Martin Lawrence and Will Smith. 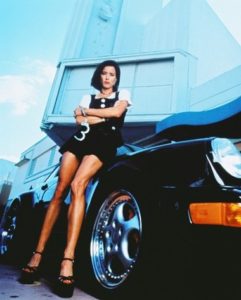 The first major opportunity that has come her way since she first decided to act in front of the cameras, Bad Boys starred Leoni as Julie Mottーthe main female protagonist of the film. Directed by Michael Bay, the action comedy followed two detective officers named Mike Lowrey and Marcus Burnett (played by Smith and Lawrence respectively) as they try to protect the witness of a murder while investigating a case involving stolen heroin.

Playing opposite the two male stars, the actress’ character is the best friend of Lowrey’s ex-girlfriend. Besides the trio, the cast list also included Tcheky Karyo, Vic Manni, Frank John Hughes, Joe Pantoliano and Nestor Serrano. Released in theatres on April 7, 1995, Bad Boys proved to be a commercial success, earning over $15 million during its opening weekend in the United States; by the end of its theatrical run, it had taken in well over $141 million worldwideーa massive amount compared to its production budget of $23 million. Despite being a financial hit however, opinions on the movie were generally divided; while some criticized the film for its generic plot and underwhelming script, others lauded it for its amazing acting and cast. Nonetheless, considering the popularity that Bad Boys drew in, it’s not surprising to know that it garnered Leoni much exposure and fame as an actress. 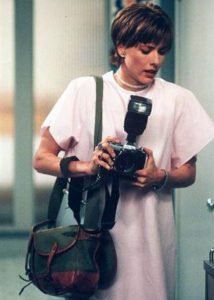 That same year, Leoni was also cast as a starring character in the ABC sitcom, The Naked Truth (1995). While it wasn’t her first lead role on televisionーas she starred in Flying Blind previously back in 1992ーit was the first to garner her widespread attention on the small screen. Created by Chris Thompson, the series starred the actress as Nora Wildeーa Pulitzer-nominated photographer who tries to make a life for herself after divorcing her rich and powerful husband; desperate for employment, she eventually takes on a job at a sleazy celebrity tabloid called The Comet.

Originally premiered on September 13, 1995, The Naked Truth was a considerable success; it ranked number twenty five and attained a 11.4 rating. Despite this, the series was later cancelled by ABC after a single season. At that point, the sitcom was picked up by NBCーwho after retooling the story, began to broadcast it on their network. Reprising her role as Nora in the subsequent seasons, Leoni was ultimately a star on the show from start to finish; she appeared in all 55 episodes. While the ABC version of the sitcom received considerably greater reviews, the later seasons were also enjoyed by manyーin spite of the fact that it was generally considered to not be as “funny” as the earlier episodes. After a three season run, The Naked Truth ended on May 25, 1998.

Transitioning to film, Leoni co-starred in the major blockbuster, Deep Impact in 1998. Produced in collaboration with Steven Spielberg, the movie centred around humanity’s attempts for survival as a massive comet makes its way down upon Earth. Portraying one of the main leads, the actress played the part of Jenny Lernerーa MSNBC journalist whose work ultimately prompts the President to announce the forthcoming arrival of a comet named Wolf-Biederman to the public. Other starring actors in the film include Elijah Wood, Robert Duvall, Morgan Freeman, Maximilian Schell, and Vanessa Redgrave.

Screened in theatres on May 8, 1998, Deep Impact made over $41 million in ticket sales during its opening weekend. Despite having opened at the same time as Armageddon, the film made its way to the top of the box office. A massive financial success, it later went on to earn over $349 million worldwideーmaking it the highest-grossing film to have been directed by a woman; a record which it held onto for a decade. Regardless of the mixed reviews that it received, Deep Impact received numerous awards including an ASCAP Award (e.g. Top Box Office Films), an Image Award, a Golden Screen Award and a Young Star Award, amongst several other nominations. For her portrayal of Jenny Lerner, Leoni also garnered a Blockbuster Entertainment Award for “Favourite Actress in a Sci-Fi Movie”.

Leoni’s next major break came in 2000 when she starred in the romantic comedy drama, The Family Man opposite of Nicholas Cage. Written by David Weissman and David Diamond, it centred around an investment broker by the name of Jack Campbell who is given the opportunity to see what could have been had he made a different decision many years ago. While Cage played the part of Campbell, Leoni portrayed the role of Kateーhis former girlfriend whom he magically wakes up to on Christmas Day.

Released in time for the holidays on December 22, 2000, The Family Man earned over $15.1 million during its opening weekend and ranked number three at the box office. By the time its theatrical screening was over, it had grossed over $124 million against a production budget of $60 million. Despite the amount that it took in however, it was met with generally mixed reviews from film critics. Given an average score of 53% on Rotten Tomatoes, The Family Man was mainly criticized of its predictability. While the cast’s performancesーespecially Leoni’sー garnered much praise, its “lack of sentimentality” ultimately brought down its ratings. For her stunning performance in the holiday film however, the actress was given a Saturn Award for “Best Actress” in 2011; she also received a Blockbuster Entertainment Award nomination for her role. 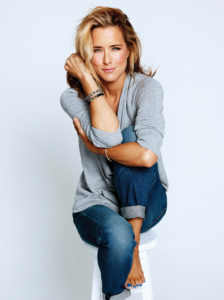 Currently, Leoni is starring in the political drama, Madam Secretary as Dr. Elizabeth Adams McCordーa role which she’s been playing since the series’ inception back in 2014. The show’s principal lead, it revolved around her character as she struggles to balance her personal life and family with her duties as the US Secretary of State. As of October 2, 2016, Madam Secretary is on its third season. If you’d like to tune in, it airs every Sunday at 9/8C.

Aside from that, it doesn’t look like the actress has much planned for the new yearーwill she ever go back to starring in films? Only time can tell.

If you’d like to stay connected and up-to-date with the award-winning actress, you can do so by following Tea Leoni on Twitterー you can find her at @TeaLeoni.