The Chicken Bone Update- What Happened After Bar Rescue 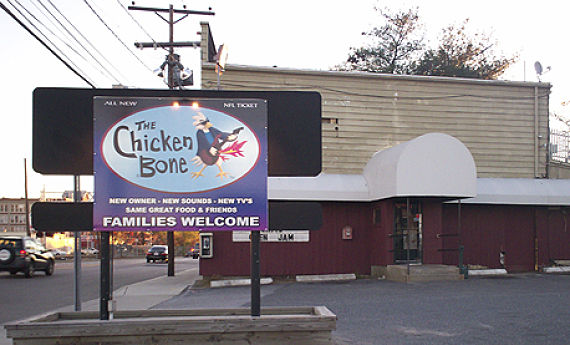 The Chicken Bone before Bar Rescue

Five years ago, the owner of a successful excavating company purchased his favorite local bar, The Chicken Bone. Bill Rodenheiser was inspired by the possibility of leaving the construction business behind and ended up opening up a second Chicken Bone – however, the second The Chicken Bone bar closed its doors after only 9 months. Because of this, Bill was forced to double his hours at the construction company and move his family more than 75 miles away. To make matters worse, Bill does not trust his general manager Jeff to make any decisions without putting up a fight.

The Chicken Bone on Bar Rescue

Jon Taffer begins this episode of Bar Rescue with his wife Nicole by staking the place out. The first thing that the two of them point out the unappealing sign, where a chicken has a fire stream exiting his buttocks. To make matters worse, The Chicken Bone yields terrible results on Yelp. Jon sends Nicole in to get some more information about The Chicken Bone, and Jon will enter in an hour to let Nicole get the scoop on the bar.

The Chicken Bone is a 4200-square foot venue with typical seating and a small stage area in the corner. The first thing Nicole points out is the disgusting floor which has not been polished or even mopped in a while. The menu is busy and confusing, and Nicole receives a beer without a head of foam. A customer even speaks to Nicole that The Chicken Bone is attempting to be a family bar, which is something that it is not – the couple has been coming to the bar for 5 or 6 years. The fact that people are bringing in children is not appealing. Since the bar’s name is The Chicken Bone, the wings menu is very hard to find.

Nicole orders the buffalo chicken mac and cheese, and she experiences heartburn and an upset stomach – to make things worse, the word “surprise” was spelled as “suprise.” Nicole signals Jon Taffer to come in, and Jon also tears apart the bar just like Nicole did – trying to create a family bar is a formula that will never work. Jon seeks out Bill to begin the work, and the two of them enter into the office.

The first thing Jon asks is how much Bill lost, and 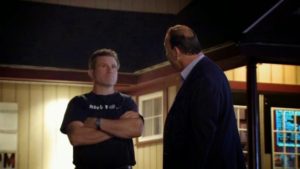 Bill lost $1.5 million dollars in Boston, right across the street from Fenway Park, one of the most famous ballparks in America. This is the mistake of his life, he says. Jon also says that the “spies” he has sent in have said that they do not feel comfortable drinking a beer with all the children around. Despite this, the bar has doubled its profits from $900,000 to more than $2 million in the past year, but The Chicken Bone is losing money. Either cash is walking out the door, or the numbers are wrong. Bill does not know his fixed costs off the top of his head, and Jon says that scares him deeply.

Jon assembles the staff and introduces his experts – Michael Tipps, one of the most sought-after mixologists in the country, has come to teach the bartenders new cocktails and determine ways to cut costs at the bar. For the kitchen, John has called in Spike Mendelson who serves in Washington DC for catering the president and politicians of high status. Michael Tipps and Jon enter the bar and point out that there are no mats – this is a disaster waiting to happen. Michael points out that he saw a woman dislocate her knee from slipping on a wet pile in an area where there were no mats. Spike digs deep in the kitchen and pulls out an immediate health violation in the preparation area, which is a disgusting yellow film building up on the steel surface. To make matters worse, the deep frying oil has been sitting in the fryers for awhile. Spike continues to dig deep and points out the dings in the preparation area, which he says might be bullet holes from angry customers in the back of the preparation area.

Jon then pulls a knife and begins to pick at the fryer area, pointing out that the substances are so caked on that he cannot even use a knife to pry off the caked-on grease. Spike then pulls out a tub of something that Jon says stinks. Inside the tub is chicken and Spike explains that this is salmonella waiting to happen. Bill himself is not happy – this is his money wasting away, he says, and living 75 miles away and making a long daily commute. People are not doing their jobs and they start by cleaning absolutely everything. More and more neglect is revealed at every turn. Jeff, however, says that he wanted to change the way the kitchen was set up but Bill was putting up too much of a fight.

The cleaning process takes longer than expected, and since the Boston Bruins are playing at a home game, Bill wants to open the doors at 8:00 to let people view the game. Jon disagrees and explains that he is cleaning up the mess, and these are the consequences are that the kitchen will be closed tonight. Bill is upset, but ultimately agrees with Jon that they must keep the kitchen closed. 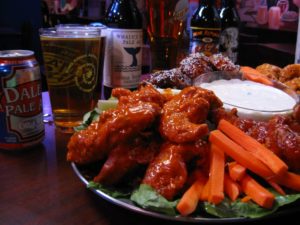 Jon, Spike and Michael continue going through the renovation process and the redesign process begins. Jon calls in his designer and reveals the bad news to Bill – they are changing the name from The Chicken Bone to a new name. Inside the store, they strip away the brightly-colored floor and the mural-covered wall. During the renovation process, Jon introduces Bill to Jim Koch, the brewer and founder of Samuel Adams. Bill is blown away by the surprise; Jon and Bill are taken on a tour throughout the Samuel Adams brewery. Jim explains that when he started the company, it was hard to get a loan from a bank, but he has a variety of programs that encourage small business owners and entrepreneurs to come and find coaching. Jim Koch sends back plenty of brand new Samuel Adams pint glasses for use at The Chicken Bone.

The Chicken Bone Now in 2018 – The After Bar Rescue Update

On the day of the relaunch, Jon reveals the name to Bill and his staff – the name The Chicken Bone sounds like a fast food restaurant, so he has changed the name to simply The Bone. Bill admits that the name works perfectly. Inside the bar, renovations have been completed to make the bar into a much more mature space – wood and leather are plentiful, and the stage has even been opened up to allow for bands and performers to have more space. Everyone is amazed at the state of the bar, and the colorful daycare center floor has been replaced with a polished wooden floor. The Bone is family accessible, but not family friendly. Mats have been placed behind behind the bars, and bartender Ali says that after a shift, her feet and back were killing her. The entire change of the bar has been designed to yield more profit.

Unfortunately, Jon Taffer and his staff did not have a successful rescue for The Bone as the bar closed in or around the summer of 2014. Prior to closing, The Bone received an average 3 star review on Yelp, although all customers that left a review loved the food and atmosphere that the place provided. Bill placed The Chicken Bone up for sale, asking for an entrepreneur with as much passion as him to take over the bar. The Chicken Bone was listed with an asking price of $175,000 in August 2014.