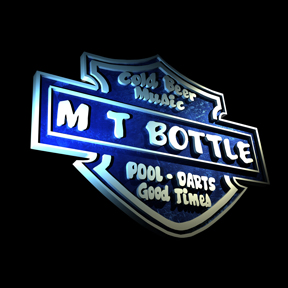 In 2008, Tracy Bigford opened MT Bottle which only served beer. It was easier to stay with beer, Tracy claims; a few months later, he hired manager Gina. The two of them fell in love at MT Bottle and married. The bar is their entire life. Short on funds, Tracy used his creativity to revitalize the bar; Gina claims he is the master of redneck engineering. Tracy created a stage and a cooler system, created the bar himself, and made the bottle chute for bartenders to drop bottles directly into the recycling bin. In its infancy, MT Bottle was a big success, using sexy bartenders to pack the bar with local bikers and construction workers. Over time, the locals tired of the bar’s beer-only menu, and those who stuck around started to understand the county’s B.Y.O.B (bring your own bottle) policy and started brown bagging their own bottles instead of dishing out money for the bar. Gina had to go and take on a full-time factory job to make ends meet. Tracy promised that he would reduce Gina’s workload, but Gina is still stuck with a double workload. As a result, the two’s marriage has suffered. MT Bottle is now without a liquor license and is more than $250,000 in debt.

34 miles south of Nashville lies a stretch of US Route 31 that carries more than 22,000 blue collar commuters to and from work each way. Murfreesboro is connected with with Shelbyville and a few other cities, all of which have a decent median income, but all of which are significantly less than the national average. Against Route 31 sits MT Bottle. Jon Taffer and his two experts have pulled up to the outside of MT Bottle to perform some reconnaissance and receive some information. Big Smo, the self-proclaimed king of country rap, had his start at MT Bottle and was eventually signed to Warner Brothers records and even performed at the CMA Music Festival. Smo explains, MT stands for “middle to the seat.” Stretch, the culinary expert based out of Missouri and has experience with sculpting and fabricating, explains that the building looks run-down; there is no entry-way. It looks more like a convenience store.

On the camera that the three are viewing in the car, Jon points out Gina’s attire – there are pierced nippler rings on the actual shirt she is wearing. Smo explains that Gina made the shirt herself, but she does not look like anyone’s boss. When Smo started his music career, Gina offered him a shot, but Smo feels that if the bar does not tighten up, he will have to remove his name; the bar is cramped, smells bad, but he wants to see her succeed. The biggest problem with the bar is the lack of a liquor license, Smo explains. When customers pour for themselves, there is nobody present to monitor overconsumption of alcohol. To make things worse, bartender Brandi is serving chilli and nacho cheese out of a pump. There is no designated cook; the cooking equipment is all behind the bar.

Jon has recruited two local guys, Rick and Jim, to serve as spies. The two enter the 2,200 square foot space featuring one service station, two draft systems, and a flatbed trailer in the back that is used as a stage. The two enter the bar and are greeted by the bartender using their name. The two of them have already poured about 18 fl oz of alcohol between themselves, and Jon is worried about the liability of the bartender. Smo explains out in the car, a patron can get a boobie show for $5 – sure enough, one of the bartenders flashes her chest at Rick and Jim. Jon calls Rick and instructs Rick to pour drinks for other patrons, which he does; behind Rick sits Tracy, who is lethargic and could not care less. The two spies are at more than 70 fl oz of alcohol. At $5 a drink, MT Bottle is at $350 lost revenue due to their lack of a liquor license. 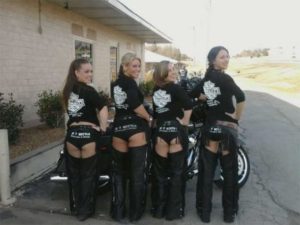 Jon has seen enough and enters MT Bottle for himself. All of the bartenders see Jon approach and know who he is. Jon approaches Tracy and Gina and explains that Big Smo is playing at MT Bottle on Friday, and since Gina gave him a chance, Smo wants to help them back. Tracy understands that he is losing a lot of money, and Gina is frustrated with her manufacturing job. They only need a grand to purchase a liquor license; they went through all the steps to receive the liquor license, but now they just need the money. Jon promises that he will get them the liquor license with a check from his own account.

Jon approaches Brandi and explains that while boobs are a billion dollar business, showing nipples are against the law; she could be arrested for indecent exposure. Behind the bar, Gina introduces the redneck chute that drops all the bottles and cans down into the basement. The basement is disgusting with mold and general disorganization. Cans are emptied into a bag and bottles are emptied into the bin. Unfortunately, everything in the freezer is suffering from freezer burn. There is also a “natural spring” in the basement, which Jon says smells absolutely awful – it is an in-building lake that is filled with sludge and who-knows-what-else.
Jon is having the in-building lake tested while he has a meeting with the staff. He explains that if the water tests for black mold, there is no redemption to be had – they are closed and nothing can be fixed. Jon reveals that the test results came back okay and that there is no black mold; in fact, Jon has had the area pumped out and drained. Jon also pulls out the county liquor license that he has paid for, and explains that the liquor can increase sales by up to 300%. Russell Davis, mixology expert and 2012 bartender of the year, steps into the bar with Stretch. The two immediately set to work retraining the staff and introducing new menu items. 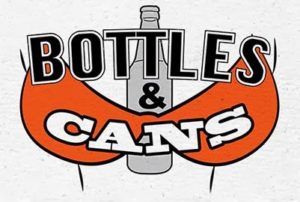 The bartenders, unsurprisingly, do not know how to pour any liquor-based drinks and even pour overly foamy beer pints. They also have no experience with any of the bartending equipment so Russell’s patience is tested. However, Russell does introduce several new cocktails, all of which are regional-based thanks to Tennessee’s roots with Jack Daniels. Stretch also has his work cut out for him, as the bartending staff are also the staff cooks. The menu leaves little room for innovation or creativity, as the bar is only equipped with deep friers.

MT Bottle Now in 2018- The After Bar Rescue Update

MT Bottle has been renamed to Bottles and Cans thanks to Tracy’s innovation with the redneck chutes; the entire “MT” has been dropped since any new potential customers would still have the initials in mind. To this day, Bottles and Cans is still open in the same building in Murfreesboro. The building has been entirely revamped with an actual walkway and the stage has also been revamped with Christmas lights and a much wider performing area for the bands. Jon has also installed a toilet fountain that redirects the water from the sludge area in the basement. Bottles and Cans has a decent 3.9 star rating on Facebook with 434 reviews, most of which praise the unique scenery around the bar. On Yelp, the bar has an average 3.2 star rating across 6 reviews, most of which praise the cheap prices of the bar. Unfortunately, there is only one weak 1-star review with only 1 review on Tripadvisor for the bar.