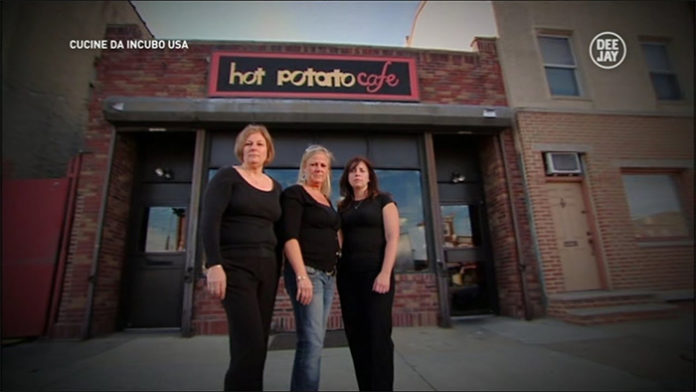 A small family-owned cafe tucked away in Philadelphia, Hot Potato Cafe offered a variety of dishes from crab cakes to filet mignon. Founded in 2007 by three sisters, Kathryn, Claire, and Erin Keller, it served as a “little lunch place” for those working, or living in the area. Assisted by their niece Danielle in the kitchen, they expected business to boom; this, unfortunately, was not the case. To the owners’ devastation, a bad review in the local newspaper soon drove their remaining customers away. Desperate to save the reputation of the cafe, they invite celebrity chef Gordon Ramsay for a chance to turn things around.

Unsurprisingly, Gordan Ramsay is already familiar with Hot Potato Cafe even prior to stepping foot into the restaurant- or more specifically, the cafe’s reputation of being “Spuddy Hell”, according to the local paper. Making his grand arrival, he is soon greeted by the three sisters, who are obviously more than happy to receive his help. Sitting down, the group goes on to talk about the recent review that the restaurant has received. Confronting the owners about “what is wrong with the restaurant”, the women are silent.

It isn’t until after a while that one of them manages to speak up, stating that the food is not the issue. In fact, the sisters all agree that they have no idea what’s wrong and that they are at “a complete loss.” From there, Gordan soon learns who’s in control in the kitchen- their twenty-one-year-old niece, Danielle. With that, things slowly make sense for the celebrity chef; in his words, she’s so young that it’s likely that “she hasn’t even had the time to learn anything.”

Going on to inquire about their special dishes, the owners tell Gordan some of their specialty foods- shepherd pie, crab cakes and pirogies. With that, he immediately questions the name of the restaurant- surely, a Hot Potato Cafe would serve some novel potato dishes? Seating himself at a table, he is eventually greeted by his server Brian, who takes his order. Looking at the menu, he then orders a hot potato soup, a hot potato, and a shepherds pie. Quickly, the first dish arrives. “A mess”, Gordan describes the soup as being like “a lump of goo.” Unimpressed, he soon sends it back to the kitchen, but not before learning that it’s actually made every other day.

The next dishes to arrive are the Baked Potatoes. Almost immediately, he confirms his suspicions with one of the sisters that they indeed come, frozen. Taking a bite, he states that “it tastes dreadful.” To make matters worse, he soon learns that the potatoes were baked three weeks ago, as opposed to being made fresh to order. Disappointed, Gordan once again sends it back to the kitchen, of course, much to the disappointment of the sisters.

Finally, Shepard’s pie arrives at Gordan’s table. “One-third mash and one-third greasy minced lamb”, he tells Brian to take the dish away, for the owners to try the dish themselves. Within minutes, their dissatisfaction with the food is obvious; in fact, one of them even describes it as being “something you’d get at the cafeteria at college.” Restless, Gordan soon takes himself to the kitchen, where he is introduced to the head chef, Danielle.

Not only is he amazed to learn the fact that she is not a trained chef, but he is also surprised to learn that she’s simply been following the recipes over and over. With that, Gordan leaves Hot Potato Cafe to cool his head; it isn’t until the following day that he returns to the restaurant. Sitting down once again with the owners, he gives them one last chance to prove themselves during dinner service, which is to happen in a few hours.

As news of the celebrity chef spread in Philadelphia, the restaurant quickly filled up. Unfortunately, the staff quickly becomes overwhelmed with the abundance of orders. With an obvious lack of standard and control, the dishes eventually make their way to the tables- the customers’ reactions are anything but positive. Rounding up everything as soon as dinner is over, Gordan expresses his disappointment to the owners, who have an obvious “lack of passion for the restaurant. With a lack of “fight” from the owners, Gordan simply shakes his head. Done with Hot Potato Cafe, he makes his way out the door.

It wasn’t until another heart-to-heart talk that he returned to Hot Potato Cafe. Unhappy with their current dishes, Gordan challenges them to put together the “best potato dish”, during which he is the most impressed with Danielle’s plate. Continuing with a second dinner service, it doesn’t take long for the chef to realize that her portions are too big; the cafe’s profits were going out the door in takeaway boxes! In attempts to remedy the problem, he destroys all of the restaurant’s large plates.

But it doesn’t stop there, Gordan Ramsay also decided to personally invite one of his chefs, Richard, to mentor Danielle over the period of a month. In addition to that, he also pulled some strings which allowed the restaurant to receive a free potato supply for three months, from a local farmer. With the changes in place, he eventually invites the local paper’s food critic back to Hot Potato Cafe for their “new” opening night. To the owner’s surprise, he seemingly enjoys the food.

Hot Potato Cafe Now in 2018 – The After Kitchen Nightmares Update

For a period after the show, the restaurant continued to operate in Philadelphia. Over time, however, the quality eventually began to slip back to what it was before Gordan’s visit. Finally, in May 2010, the owners put the business up for sale. Unfortunately, the celebrity chef’s efforts were ultimately not able to salvage the Hot Potato Cafe.

Today, the location exists as the Lloyd Whiskey Bar. Open since 2012, they seem to be doing very well for themselves, as can be seen by the overwhelming amount of positive reviews on Yelp.