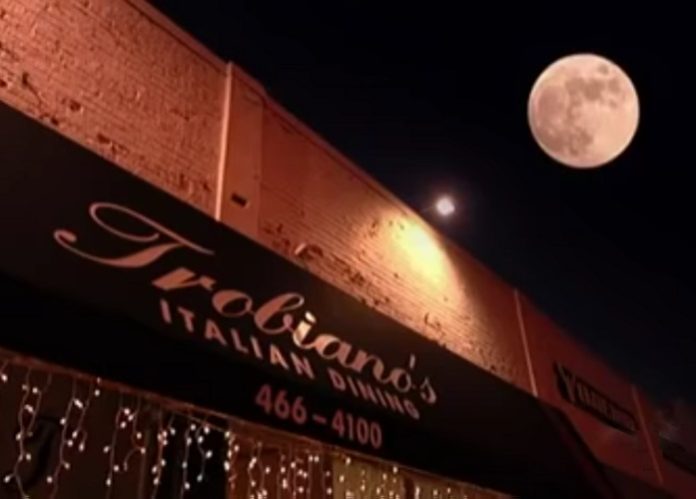 Gordon Ramsay visited Trobiano’s Italian restaurant in season two of Kitchen Nightmares back in mid-2008. The restaurant was located in Great Neck on the North Shore of Long Island, New York, a neighborhood that was already consumed with various Italian restaurants trying to stand out. After three years of business, the restaurant was on the verge of closing and Gordon realizes he has his work cut out for him if he was going to save the failing restaurant.

The owner, Anthony Trobiano, and his girlfriend, Tiffany, were suffering from the stress of keeping the restaurant going. Tiffany’s parents, Joe and Pat, had put up the money to launch Trobiano’s and were faced with the possibility of seeing their life savings go down the drain. The family was at their wit’s end and needed a miracle to turn the failing Trobiano’s into an inspiring Italian eatery. Enter Gordon Ramsay, but as we would soon find out, even Gordon almost walked away from this particular kitchen nightmare.

When Gordon first arrives he’s less than impressed with a large notice in the window advertising the ‘Early Bird Special’, and seems amazed that the special is only $14.95, ‘Cheaper than Subways’ he remarks in disbelief. Gordon sits down with Anthony, Tiffany and her parents and quickly learns that Anthony opened the restaurant three years previously when he was only 25. Gordon wants to know if Anthony had worked in an Italian restaurant before, and is amazed when Anthony confesses he hadn’t, as he thought he ‘Knew everything’, and still does. ‘Are you that arrogant?’ Gordon inquires and Anthony avoids an answer as Tiffany and her parents nod their heads. Clearly, Anthony is not lacking in confidence.

Gordon returns at 4.30pm to experience the food for himself along with the early birds, and although there are quite a lot of them Gordon is still the youngest diner in the restaurant by a good thirty years. ‘I feel like I’ve come to see my granny in a retirement home’ he remarks. He asks about the Trobiano salad and learns that it’s pre-chopped. He asks why and Pat tells him the customers seem to like it that way. ‘Is that because of their teeth?’ he asks. Finally, Gordon opts for the eggplant tower and the chicken-wrapped shrimp, to be followed by the spaghetti bolognese with salmon, a curious combination of flavors that has him looking apprehensive about how it’s going to taste as soon as the waiter leaves his table.

While he’s waiting, Gordon notices one elderly diner appears to be taking a quick nap, and when his eggplant tower arrives he’s less than impressed with the mozzarella which is definitely not home-made, even worse Gordon thinks it’s ‘Ghastly’, remarking that it’s stone-cold, solid and tasteless. While waiting for his next course Gordon chats with a few ladies at another table. He notices that one of them is taking half her enormous meal home with her. One of the women remarks that she likes his accent, and he replies that he admires her lipstick. Gordon’s happily married but he and this group of octogenarians are quickly developing a warm friendship. He leaves them with the remark that it’s been lovely to spend some time with the Golden Girls, and returns to his table just in time to receive his chicken-wrapped shrimp.

Once again Gordon isn’t impressed with Anthony’s culinary creations. ‘Looks like chicken, tastes like shrimp’ he observes without enthusiasm, and to make matters worse he’s soon returning the dish mainly uneaten after telling Joe that he’s never seen a shrimp so tough. Anthony’s not happy that his food isn’t meeting with Gordon’s approval but when the salmon arrives Gordon finds it ‘Dry’ and ‘Absolutely hideous’ and once again it’s returned almost untouched. When Gordon and Anthony meet up after the meal the tension is palpable. Gordon’s amazed at the huge portions, he likens the eggplant tower to ‘The leaning tower of Piza’ and describes the food overall as ‘Hideous’. Gordon leaves Anthony, Tiffany, Joe, and Pat to talk things over but he’s unable to take his mind off Trobiano’s. He comes back into the kitchen the back way to see what the kitchen is like, and he isn’t happy with what he finds.

Digging into every dark nook and cranny in the kitchen Gordon soon discovers dirty plates, slimy surfaces, and even identified droppings, rats or mice is his guess. He returns to the dining room and takes Anthony out back where a heated debate soon begins. Anthony explains that the staff is supposed to clean every day. Gordon asks if he ever does any cleaning himself, and Anthony somewhat unwisely replies ‘That’s what we have staff for’. Gordon almost explodes in anger, Anthony seems sheepish and shrugs a lot, and eventually, an enraged Gordon tells Joe and Anthony that they have ‘No chance’ and walks out while continually repeating ‘I am out of here’ in a tone that suggests he’s reached the end of his already short fuse.

Anthony attempts to talk Gordon around and bravely decides to talk to the angry chef outside after Gordon’s had a few minutes to calm down. Eventually, he agrees that a bit of humility wouldn’t hurt him and he and Gordon return to the restaurant to give that dirty kitchen a few hours of deep-cleaning. The next day Gordon decides to take the family to a farm to milk cows, it seems an unlikely decision but soon all becomes clear as Gordon explains that with some milk fresh out of the cow, making some fresh mozzarella to wow the customers will be the first step on the road to recovery. The family has a good time and has a chance to enjoy each others company away from the stress of the restaurant.

Gordon introduces some new specials to the menu, concentrating on fresh ingredients and utilizing the teams’ new mozzarella making skills. That evening the new specials seem to be a success at first but Anthony begins to fall apart. Meals are returned and Anthony is not taste-testing the food to find out what’s wrong with it. With the tension in the kitchen rising and Anthony beginning to panic, a pan burning on the oven sets off the fire alarm and that creates even more delays. Overall the evening is disappointing and Gordon emphasizes to Anthony how important it is for him to taste his own food, particularly when it gets returned.

There’s another one of those incredible overnight make-overs for the restaurant as the Kitchen Nightmares crew magically create a far more modern and pleasing look for the restaurant ready for relaunch night. The Trobiano’s team love the new décor and everyone is pumped up and positive for the fresh start, but the pressure is on Anthony to perform better than he ever has before. Gordon reveals that Barbara Fairchild will be attending, and it’s a golden opportunity for the restaurant to impress. Barbara Fairchild is the editor of Bon Appetit Magazine. Bon Appetit is one of the catering industries most respected publications and it’s got a monthly readership of over five million, all of whom will be reading about the failure or success of the revamped Trobiano’s in the next issue.

On relaunch night things start smoothly, but soon the packed dining room thronging with diners is creating problems for Anthony, in part due to the servers scribbling the orders in illegible handwriting. Gordon tells Anthony to take control but the queue of orders is building up and soon an under-pressure Anthony is struggling to keep up. Only one dish is returned due to it being served cold and generally, the new menu is well-received, the most influential diner, Barbara from Bon Appetit is full of praise for the food, and at the end of service, the evening is judged to have been fairly successful. The Kitchen Nightmare at Trobiano’s has been turned around into a far more profitable and tasty experience for customers, but Gordon’s got some more surprises up his sleeve, and they’re some big ones.

Throughout the show, we’ve been told that Anthony and Tiffany have been unable to find the time or money to get married due to work demands, but Gordon presents Anthony with a diamond-encrusted wedding ring and Anthony proposes to Tiffany at the restaurant. There’s one more surprise in store and that’s the wedding ceremony, which Gordon has arranged for that very evening, and the successful relaunch turns into a whole new life for Anthony and Tiffany on a far more personal level right there and then in the newly revamped Trobiano’s. The show ends on that high point with the family pressures greatly decreased, and Trobiano’s with a far better reputation than it had previously, but it wasn’t a reputation that the restaurant had time to savor for long.

Trobiano’s Now in 2018 – The After Kitchen Nightmares Update

Gordon Ramsay had visited Trobiano’s in mid-2008, and the show was finally aired in September of that year, but just one month later the mounting financial problems that Anthony and his family had been experiencing finally came to a head. The restaurant was taken down by the IRS for failure to pay taxes due, and sadly the family business had been closed down for good just when there was finally some light at the end of the tunnel. In the months between filming taking place and the program being aired, reviews for Trobiano’s had been overwhelmingly positive and perhaps things could have been very different if the financial state of the business had not been so severe.

Anthony has continued to work in the catering industry since then, he moved on to become the executive chef at another Italian restaurant which unfortunately also closed due to financial problems in 2011, and since then he has been employed as the executive chef at Cirella’s Restaurant and Bar in New York City. Gordon’s visit to Trobiano’s may not have been able to save the family restaurant that was already so heavily in debt, but it’s at least good to know that Anthony and Tiffany are still happily married, and now in 2018 have fulfilled at least one of their dreams and had three children together, which is at least a partial success for Gordon’s efforts at Trobiano’s.