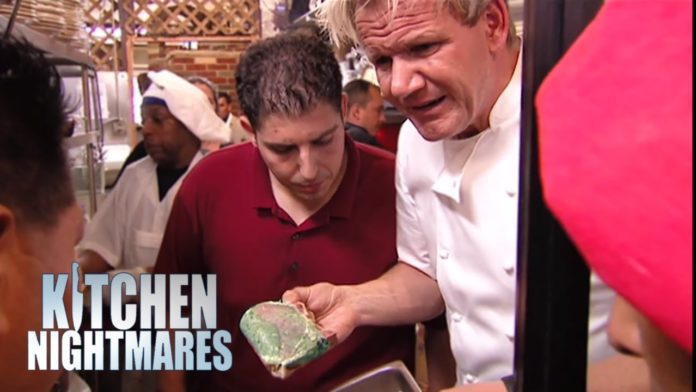 Based in Montclair, New Jersey and founded by Rose in 1996, Leone’s is an Italian eatery with good connections to the community and at one time had great food. Three years before airing, however, Rose fell into a coma as a result of complications during a kidney stone operation, and her son Michael took over for two years before she woke up. Having not gained the same skills as his mother had in either leadership or running a restaurant, Michael has kept Leone’s open, but barely (typically liking to relax during a shift as opposed to working). Losing on average around $4,000 a week, Rose returns not long before the filming of the episode. With a newly recovered owner, a mountain of debt, and a menu that consists of over 100 items, can Chef Ramsay make the changes needed to make Leone’s the pizzeria that Rose had once built, or is he too late?

Before Chef Ramsay shows up, there’s quick testimony from the staff that state that Rose was an incredibly hard worker who really held a tight ship, and that Leone’s itself was once a jeweled institution for the Montclair community. After she fell into a coma, the staff lost a good deal of guidance, and the new boss Michael is about as good a leader as some of the furniture, while one of the head servers picks up the slack, or tries to. Much of the staff will follow Michael’s lead and do very little work, and as a result, reservations have dropped from a full house to maybe 15 a night. Both the kitchen and the front are absolutely filthy, with moldy food being shown, and Rose on her return is beyond angry. Rose asks Ramsay to be her voice before it’s too late.

Chef Ramsay walks in and meets Michael, and sees he is watching sports. He then makes an excellent point by sending Michael out for a moment, only to have him return while Ramsay is watching a soccer match and can’t be interrupted. It’s obviously a bad impression, but what’s worse is the décor, which features horrific paintings of what seem to be babies. Rose is then introduced, and she gives him the low down on her previous condition and also is very impressed with Ramsay’s physical appearance. She states everything is wrong with the restaurant but she needs help getting things back into shape. A quick staff meeting is held to introduce everyone, and Trudy, the de facto leader, states there’s no control. Trudy states Michael probably never had any real passion, and even Rose states “It takes balls” to run Leone’s, and it’s unlikely he has the pair to carry during this instance.

Ramsay then takes 20 minutes to inspect the place and orders one of every item, which sends the kitchen into madness as it has a 15-page menu of over 100 items. This nearly makes Chef Gordon keel over just from the tables of food presented. The appearance of the lot is low quality. On the whole, the food tastes poor as well, but the worst offender is the fish dishes which taste terrible and the clams aren’t even clean. The chefs and cooks are brought out and taste their own food. During this, Rose asks to try some, and Ramsay waves her off saying he won’t be responsible for her winding up in a hospital bed again. When asked, the chefs hate their own food. Michael remains delusional about this situation, and Gordon states he’d like to just walk out and call the episode a loss.

He then returns to check out dinner service, which is much busier because of Ramsay’s appearance. He then checks out the kitchen line, which is predictably chaotic and the dishes likewise disappointing. In the storage containers, there’s plenty of rotting food, frozen shellfish, and raw to cooked contamination. There’s even food stored in the cooling units from Thanksgiving – this episode was aired in July. He calls in Rose and tells Michael he is not resistant to change, but instead resistant to any real quality. He then rips into the staff and shuts the place down due to the clear health hazards that would in any other circumstance condemn the building on the spot. Michael is assigned to the front to apologize for the subpar quality and the need to shut down, which the crowd takes with some disbelief. 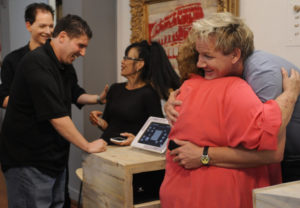 During the staff meeting, Rose admits her son has no integrity, which he tries to contest but is totally shut down by Ramsay’s statement that at least in his mother’s eyes, he doesn’t care about Leone’s. It’s clear Michael needs to quit being lazy and start being a leader, as not a single employee believes in him, nor does his mother. The remainder of the night, the crew and Michael scrub every inch of the place. During the cleanup, Rose is in tears, and Michael shows her compassion as does Ramsay, and Michael begins to see he needs to improve. The next morning, everyone goes to an art gallery to look at the photographic art of food, only the realize these dishes are the competition, all in the same neighborhood as Leones’. He then compares them side by side with Leone’s dishes, which in comparison looks like the result of a long night of drinking.

When they return, Ramsay takes Michael into the kitchen so he can learn a bit of the back end so he can lead. While working side by side, he shows true curiosity and ambition, which is great. The shared dishes look and taste wonderful according to the staff, and boost both Michaels opinion of himself, as well as everyone’s view of him. Over the night, the restaurant is transformed into a wonderful bistro with clean, modern sensibilities (as well as a modern POS) and a revamped menu to match. As opposed to quantity, the menu focuses on fresh, high-quality dishes that are only 45 dishes along with the ability to cycle. During the relaunch, Michael does need some pushing to lead, but ultimately Leone’s comes out on top. But did Chef Ramsay get enough fixed to make sure Leone’s lasted until now? Let’s find out. 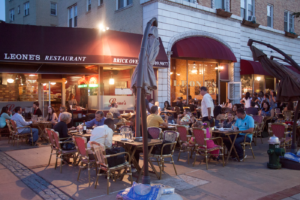 After the appearance of Leone’s on Kitchen Nightmares, things seemed to have picked up for the business. Leone’s is still currently open and has a rather high rating of 3.5 on Yelp, with a total of 226 reviews and a 2017 average rating of 3.75, though this has been on a downslope since July. As a matter of fact, December 2017 has had the lowest average rating at 2.5 that the restaurant has had since November of 2015. Hopefully, this downward trend is being caused by something that could be easily fixed. Leone’s also has its own website, which you can visit here and shows off some very good looking dishes, with a full menu, gallery and catering options available online. They also have a Facebook page that has an amazing 4.5 star rating with well over 100 reviews, the most recent of which are from August. Overall, it seems that Leone’s has been shaken out of the nightmare.