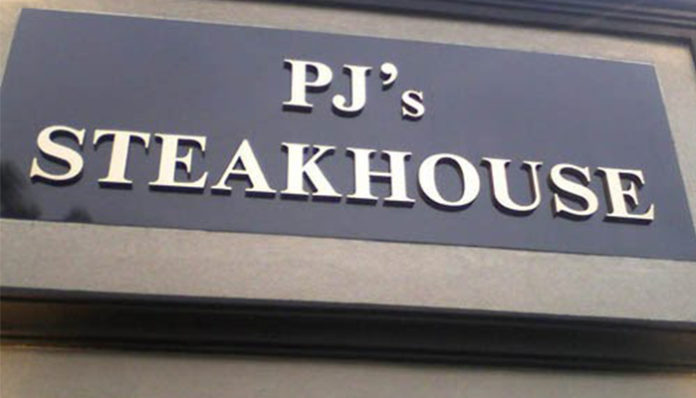 Located in Queens, New York, PJ’s Steakhouse was owned by husband and wife team, Joe and Madalyn. Opened in the memory of the his brother Joe, they invested close to $2 million in the business. Tucked away in the Forest Hills neighbourhood, they served a variety of meat dishes, from different steak portions to burgers. Unfortunately, due to their lack of experience in the industry (the owners previously worked in construction), the restaurant soon began to fall in debt. In response, they requested Gordan Ramsay’s help on Kitchen Nightmares.

In the upper-middle-class neighborhood of Forest Hills, streets and stores are bustling with activity- that is, with the exception of PJ’s Steakhouse. Arriving at the eatery, Gordan Ramsay steps through the door, only to find that no one is at the front desk. After a few seconds of maneuvering the steakhouse on his part, he manages to locate one of the owners, Joe, seated at the bar. Following their delayed introductions, his wife Madelyn and the head chef arrives to greet the celebrity chef.

With introductions out of the way, Gordan is quick to make note of the restaurant’s empty seats. Talking to the Joe, however, he is quick to realize that the owner is out of his element in the food industry, having previously worked in construction. Making the comment that he is hungry, he eventually sits down to look at the lunch menu.

Flipping through the menu, he is soon disappointed with the lack of Porterhouse and New York Strips. To make matters worse, PJ’s only offers two cuts of steak, despite being a steakhouse. Moments later, Gordan is greeted by his waiter, Colin, to whom he makes his order of crab cakes, roasted garlic ravioli, and filet mignon. With that, he sends him on his way to the kitchen.

The Crab Cakes with Collie Sauce is the first to arrive at his table. Almost immediately, he is taken back by the presentation of the dish. Taking a bite, he bluntly describes it as being “disgusting.” Not only did he find it to be “rancid” but he also discovered, much to his dismay, plastic bits mixed in with the crab.  Pushing the plate aside, he is done with his appetizer. With that, the owner comes himself to take it back into the kitchen.

As the owner returns back to the bar to watch television, his second dish arrives- the Filet Mignon. While the steak wasn’t as bad as the crab cakes per se, Gordan commented that ‘it was quite tough.’ Unimpressed with the fact that it’s served with raw onions, he asks the waiter to take it away, leaving his table empty once again.

Unfortunately for everyone, however, the food only gets worse, as Gordan deems the ravioli dish to be ‘disgusting.’ Extremely tart, the chef describes it as being ‘a mouthful of acidic, cream sauce.’ Having tasted PJ’s menu, he begins to understand why the restaurant is empty, despite a considerable amount of foot traffic outside.

Heading into the kitchen, Gordan confronts the chef about his ‘disgusting meal’, to which he is obviously unhappy about. Soon enough, a heated discussion takes place, one in which the staff takes turns in pointing the fingers at one another. In response to the owner’s inability to take charge of the restaurant, Gordan shakes his head and walks out.

Eventually sitting down with Madelyn for a heart-to-heart talk, Gordan learns about PJ’s death and the impact that it had on Joe. From there, he is told that the restaurant only makes $4,000 a week, when it actually requires $17,000 to keep things afloat. In order to maintain the business, the owner’s wife goes on to tell the celebrity chef that they had to sell their dream home, one that they had designed themselves, in order to keep PJ’s alive.

With his better understanding of PJ’s, he goes on to observe how they operate during dinner service. As the restaurant fills up with patrons, the kitchen is bombarded with different orders, something that ultimately leads the chef Eric to shut down in communication. With wait times over the roof, the customers in the dining area eventually become restless. Talking to Madelyn about the situation, Gordan soon learns that it typically takes them two hours to serve an entire meal.

With the restaurant full of unhappy restaurants and kitchen falling apart, Chef Ramsay heads to the storage area to see what is lying below. What he finds is horrifying- moldy fruits and vegetables that are soaked through to the box.

Following the end of dinner service, he confronts the owners about the state of the ingredients, which are moldy and rotten. A terrible situation, the blame is eventually put on everyone, both the owners and the kitchen staff. Telling them to throw everything out, Gordan heads out for the night.

Armed with a camcorder, Gordan decides to interview locals about the restaurant the following day; with that, he is quick to learn about PJ’s negative reputation. Returning to the restaurant for a second dinner service, he decides to introduce a few new specials to the end, including a mixed grill platter. Telling Joe to stay away from the bar, he puts Madelyn in charge of the restaurant.

As customers begin to roll in, the kitchen gets to work at preparing their owners. Eventually, the first mixed grill platter goes out. To his dismay, however, it is sent back to the kitchen for being cold. Vocalizing his discontent, Chef Eric soon walks out of the restaurant doors, forcing the eatery to be shut down.

The next day, Gordan has a few surprises for the owners. Not only is the restaurant given a new name, but he has also decorated the interior with family photos in tribute to Joe’s brother, PJ. In addition to that, he introduces a few new dishes to the menu including an Irish Stew and Steak Frites. As if that wasn’t enough, he also brings in two new chefs, Mark and Edna to trade Madelyn.

In the end, the relaunch is a success with happy customers.

PJ’s Steakhouse Now in 2018 – The After Kitchen Nightmares Update

Following Gordan Ramsay’s visit, business improved slightly over the next few weeks. Due to increasing debts, however, the owners were forced to close it down in the summer of 2009. Looking back, that may have been a wise decision seeing as how most of the reviews prior to closing were negative. Since then, Joe is said to have returned to the construction business.