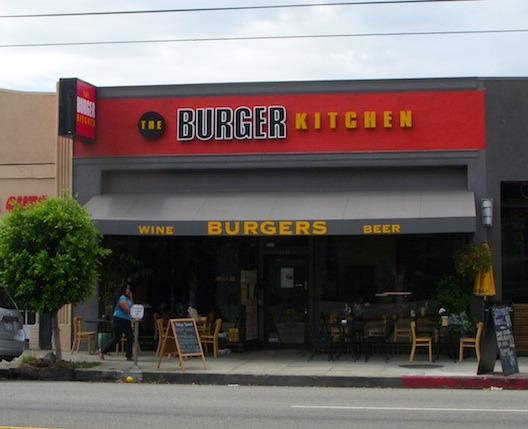 Third Street in Los Angeles is a young, hip neighborhood known for trendy shops and neighborhoods. In 2010, Alan and Gen Saffron opened a restaurant called The Burger Kitchen. Alan has always had the dream to run a restaurant because he’s always enjoyed meat. He’s eaten meat all his life in hundreds of different steak restaurants. He figured that he would try and get into a hamburger restaurant, but they did not have the money to open the best restaurant in Los Angeles. So, Alan took the money from his son, Daniel.

Daniel was dragged into the business since he received a sizeable inheritance from his grandfather. There was money in the trust account, and Alan took $250,000 of that money to start the restaurant. Because of that, Alan is absolutely invested in making the business work. However, Daniel feels that his father is not running Burger Kitchen well. Alan has now had to change their standard burgers all to Australian Wagyu. The meat is frozen and is taken out from the freezer. Customers have complained about the food being served dry.

The kitchen is not happy about this. Alan is buying dry, frozen meat and insisting that it’s good while it is not. The kitchen all agrees that Burger Kitchen is mismanaged by a dysfunctional family. There are three chiefs and four Indians in the kitchen, the staff frequently jokes. There is a lot of tension and aggression in the family, which usually trickles down to the employees. It’s hard to be belittled every day, and so for the chefs to come to work is almost unbearable. The environment is extremely chaotic and is a train wreck and a half according to some of the servers.

Daniel did not picture himself working in Burger Kitchen, but the cards have been dealt and he wants to make things a success. However, his father, Alan, does not treat Daniel like an equal partner. Rather, he treats him like a child. Daniel is absolutely at the end of his rope, and he doesn’t have anyone to lean on. Chef Ramsay is their genuine last hope.

Gordon Ramsay has indeed come to Los Angeles to take care of The Burger Kitchen. He does admit that it is a great place to have a restaurant, as it is smack dab in the middle of the city. He enters the Burger Kitchen restaurant and meets with the family right away. Alan says that when Gordon arrived, things blew his mind in more than one way. Gordon is shown to his seat, where he has a chat with Alan and Gen. 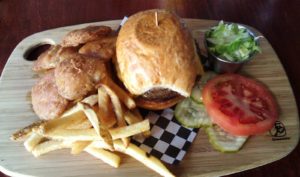 Gen says that the restaurant opened 16 months ago, which is not long at all in the restaurant world. The business is not making money, and they are losing $5,000 to $6,000 every month. Gordon asks where things went wrong, and Alan says that he thinks he has changed the menu too many times. He has changed the menu probably 10 times in those 16 months, which is nearly once a month. Gordon asks about the chef, and so far, the Burger Kitchen has had about ten chefs. The front of the house has been through 20 different servers. The restaurant is literally running through resources until nothing’s left. What is going wrong?

Alan gives the answer, although it’s not one that Gordon might want to hear – Yelp has killed their business. Yelp trashed them, and they’re also deleting five-star reviews. Alan insists that he can prove it, and Gordon humors the idea that Yelp has a plot to close their business. He then says that Alan has been watching too many James Bond movies. Gordon then changes the subject, saying that opening a restaurant in Los Angeles is incredibly expensive. So, where did they get the money? Gen explains that Alan received $250,000 from an inheritance from his father’s estate. He put all that money into the business, then they started running out of money. Then, Alan went to Daniel for more money.

Alan was managing Daniel’s money, so he actually took part of the money. As the manager of his funds, he then invested it in the business. But did Daniel know? He knew… eventually. Gordon probes for more information on this, and Alan says that he forced Daniel into the business by taking his money. Gordon looks exasperated. Daniel does the nighttime shift, and Alan works in the daytime. Their heads frequently butt, and Daniel has a great deal of resentment towards Daniel. Alan does not know why. 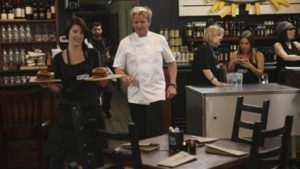 Gordon asks for information on the food, but Alan just says that he is confident that the Burger Kitchen serves 4 to 5-star food. He can’t wait to taste it, especially now that he has the background of the restaurant. Alan is confident that Gordon will love the menu, beyond a shadow of a doubt. Gordon meets his server, Madilyn, and immediately asks her what she thinks is wrong with the restaurant.

Madilyn explains that there is a complete lack of management. The burgers are never cooked right and are always sent back. In fact, she says that she’s sorry probably 15 times a night. Gordon orders the California burger, medium-rare, a Cowboy burger, the Australian meat pie, and the award-winning burger. In the kitchen, the chefs prepare themselves. Chef David says that he loved working in the kitchen at first, but now he has no control and is more like a manager. Gen tries to intercept several of the servers from communicating with the kitchen staff.

The Cowboy burger actually contains a pound of a meat patty, and Alan tries to let Gordon know that it will take a bit longer. The California burger arrives at Gordon’s table, and of course, it’s raw. He had asked for medium-rare, which means a little pink. The bread is sweet and doughy, and overall, the entire thing is bland and tasteless. The first item to arrive is sent back just as quickly. The next the award-winning burger. Gordon dives in, but like the previous burger, it is pink and raw in the middle. He doesn’t even take a bite of the food before sending it back.

Chef David leaves in the middle of the taste testing. Alan and Gen try to use David as a scapegoat, but he saves himself from blowing up and simply leaves the restaurant, never to come back.

Burger Kitchen has since closed down. Although it appeared to be a very popular spot (noted by more than 250 reviews), the food was not enough to save the restaurant. Burger Kitchen appears to have closed down as of early 2012. Most of the customer reviews cited slow service (EXTREMELY slow services in some cases, with a meal taking more than an hour to arrive) as well as the tough meats, although the fries were almost always critically acclaimed and praised. The beer selection was also another topic that was praised. Since closing down, another cheeseburger-focused restaurant has opened in Burger Kitchen’s place and is still open to this day.