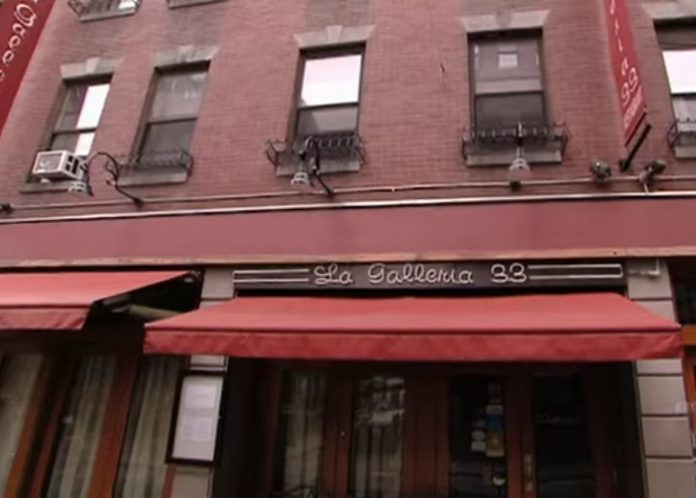 In October 2012 Gordon Ramsay and Kitchen Nightmares visited La Galleria 33 in Boston’s North End district. The Italian restaurant was owned by two sisters with plenty of experience of the restaurant industry, but they were losing money and didn’t know why.

Older sister Rita smoked too much, and Lisa was always drinking, even in front of customers. They had been brought up in their parent’s busy Italian restaurant, which was just across the street, and had expected their own restaurant to be an instant success just like that one had been, but business was anything but good. They opened La Galleria in 2006, but things never took off. They had changed the décor, lowered the prices and even changed the font on the menu, but nothing seemed to help. The staff were often uncooperative and failed to show a willing attitude at work. Often things were chaotic and head chef Doug was lacking passion in his work.

With more than 80 Italian restaurants in Boston’s North End competition was fierce, and unless they could turn things around they were facing severe financial difficulties and mounting debts. Rita explained that her parents had invested heavily in the restaurant, and they too faced losing everything, unless Gordon Ramsay could help them make La Galleria a success.

As Gordon arrives at La Galleria he first notices the number of Italian restaurants in the area, before he sits down with sisters Rita and Lisa to talk to them about the problems they are having at La Galleria. He learns that Lisa likes to drink wine during business hours, and also that the head chef is Rita’s ex-husband Doug. ‘It sounds like a soap opera’ he remarks, and Rita admits that Doug is difficult, but he can cook. She adds that many of the staff are temperamental, and won’t clean the restaurant when asked, but shortly afterward when Gordon is ordering his meal he hears a different side of the story.

Server Sara tells Gordon that there’s no organization, the owners don’t take responsibility for anything, and that Lisa treats the place like her personal bar. She also recommends the special, seafood ravioli, which makes Rita wince, as she knows it’s not well-received by customers. Next, Gordon meets former shoe salesman Pat, who claims he’s the manager, and the host, and everything else, but Rita reveals that Pat is just the bus-boy and that he’s crazy, but she loves him.

Gordon finally settles down to his home-made gnocchi and meatballs, but only after Sara admits that they’re frozen. Gordon finds the meatballs less than ideal, describing them as bland, rubbery, and ‘Like golf balls’. The meatballs are returned and Gordon samples the veal paradiso, but that’s even worse. He describes it as ‘gnarly’, gross and overcooked, before confirming it’s definitely not paradise.

Gordon tries the seafood ravioli next and looks concerned when Sara laughs as he asks if it’s fresh. Rita’s concerns about the dish prove to be well-founded, as Gordon quickly asserts the ravioli is disgusting and nothing but ‘Layers of gunk’. After Gordon bangs his head on the table in frustration Rita can see the food isn’t to his liking, and the final course of chicken marsala doesn’t change his opinion. Gordon thinks the presentation is sloppy and hopes this final dish tastes better than it looks, but instead he discovers the marsala is too sweet, bland and lacking salt. ‘Is Doug allergic to salt?’ he asks Sara as she fights a fit of the giggles.

Gordon attempts to sweeten the bitter after-taste of his meal with a dessert but finds that there’s only one on the menu – tiramisu, and unfortunately, the restaurant ran out of that a week ago. He sends Pat over the road to pick him one up from the restaurant of Rita and Lisa’s parents, and their mom brings it over for him. Finally, Gordon is full of praise for something that’s edible, and he’s hugging mom enthusiastically, but the celebration is short-lived as a sudden explosion of breaking glass heralds the shelves in the fridge breaking, along with several wine bottles that had been in there.

Gordon summarizes his meal as bland, boring and ‘Way below par’. He discovers that Doug doesn’t eat Italian food himself and has no real interest in it. Gordon tells him that customers could cook better for themselves at home, and he thinks that Doug is just going through the motions and has no passion for his work.

Gordon returns that evening for the Saturday night service. It’s the one time of the week that the busy North End district will bring a steady stream of customers to the tables of La Galleria, but the kitchen is quiet. There are plenty of orders but Doug works in silence, not communicating with anyone at all. Eventually, Gordon manages to catch Doug dropping some chicken on the floor, which is then quickly thrown into a pan, and Gordon starts to interrogate Doug about it. Doug sees nothing wrong with cooking chicken via the floor, but this gets Gordon angry, he goes through a series of bleep-laden exchanges with Doug, who eventually relents and ensures that the offending chicken breast is in the bin where it belongs.

Later that night Gordon inspects the storeroom and discovers a horde of rotten onions, dirty mussels hiding in fridges and a pile of month-old frozen cannelloni. He confronts Lisa and Rita about the generally disorganized state of the stores, but they’re both in denial. Lisa, in particular, can’t cope with Gordon’s ranting and leaves the restaurant announcing she’s sick of Gordon, but he chases her outside and tells her if she goes, he goes too. Lisa insists on leaving and part one ends with both of them leaving the restaurant in separate directions.

Part two of Kitchen Nightmares at La Galleria opens with Lisa back in the restaurant. She’s hitting the wine but Gordon speaks to her, explaining that he feels her pain, but things are out of control and have to be fixed. He holds a staff meeting where Rita lays the new regime on the line. She explains that she and Lisa are in control, and their rules must be followed. Sara gets singled out for criticism by the other servers as they claim she hogs all the tips, and she walks out, but the meeting ends on a more positive note as Lisa vows to stop drinking at work, and everyone agrees that Rita and Lisa’s instructions must be followed.

Gordon’s next tactic involves several photos he’s taken of Doug’s food, which is poorly presented, and Gordon also has several photos of dishes from neighboring restaurants to compare them with. Even Doug agrees that he could improve his presentation when Pat remarks that the veal paradiso ‘Looks like vomit’ and Gordon describes the rack of lamb as ‘Resembling a sick animal’.

Doug agrees to try harder and Gordon then brings in Mike, a speciality Italian chef who will stay at La Galleria for a month to help Doug learn better presentation skills, and also to teach him how to make Gordon’s new menu items, a range of classic Italian dishes served in small portions, something that none of the competing restaurants in the area are doing.

The final stage in the relaunching of the restaurant is an overnight makeover, with the mismatched walls and dreary décor replaced with a fresh modern look, complete with modern lighting and a far lighter, more contemporary feel. All of the staff love the new working environment, and even Doug manages to crack a smile for the first time. Lisa and Rita finally begin to see things in a far more positive light and everyone is looking forward to the relaunch of La Galleria later that night.

The restaurant is packed for relaunch night, and at first, there is a tense atmosphere in the kitchen as the pressure builds up. The computerized ticket system chooses this vital moment to crash, but Lisa manages to organize a replacement system of hand-written tickets and disaster is averted. Doug is a changed man with Mike in the kitchen, the two work well together, and the new small classic dishes are flying out of the kitchen, and they’re going down a storm with the customers. The servers are still making a few mistakes and one of them, Miguel, shouts at Rita in a moment of frustration. This leads to Gordon threatening to drag him outside, which causes Miguel to square up to him and ask ‘What are you going to do then?’, but Gordon whispers menacingly in his ear ‘I’ll make you respect the owners’, and Miguel wisely decides to cool things down.

Gordon encourages Rita and Lisa throughout the evening to regroup when things are hectic, manage the flow of orders, and to keep everything running smoothly. Lisa hasn’t drunk a single glass of wine, and the pair are finally acting like managers. Everything runs smoothly, the customers love the food and there are no complaints at all. Gordon leaves La Galleria with the sisters now firmly in control, but Rita has taken a shine to Gordon, and chases him down the street, begging him to stay.

La Galleria Now in 2018 – The After Kitchen Nightmares Update

There’s usually a depressing finale when I write an update of Kitchen Nightmares episodes, and that’s due to the fact that most of the restaurants that Gordon visits have closed within a year or so of the Kitchen Nightmares episode being aired. The success rate of businesses featured on the show stands at just 25%, with 79 out of 105 restaurants being closed to date, but La Galleria is I’m happy to report one of the exceptions, and it’s doing more than just surviving, it’s actually managed to turn a nightmare into a fairly pleasant experience for most of its customers.

La Galleria is holding a respectable rating on Yelp of three and a half stars out of five, and although there are some reviews that criticise the service, they generally remark that they felt rushed, and always during busy periods. In contrast, the reviews of the restaurant during quiet times often remark how friendly and professional the service is. The vast majority of the Yelp reviews speak in glowing terms about the food on offer, and almost all the reviews made in the last year are overwhelmingly positive, and with over 300 of them, it’s clear that Lisa and Rita have really taken advantage of the advice given to them by Gordon, and taken advantage of the attention given to La Galleria by its appearance on the Kitchen Nightmares show.