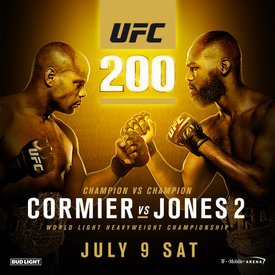 As we near closer to July 9, 2016, the supercard of UFC 200 appears to be coming closer and closer to its final evident form. Now, as is our understanding, we will have the Light Heavyweight Championship Title on the line. Jon Jones is actually the current holder of the interim championship, having beat out Ovince Saint Preux for the interim title at UFC 197 on April 23, 2016. Jon Jones was the original Light Heavyweight Champion, but had the title stripped from him back in early January of 2015. Jon Jones has only fought once since this appearance, but will be going up against the other interim champion Daniel Cormier to determine who truly is the Light Heavyweight Champion of the UFC. To my knowledge, unification fights over interim titles are rare enough in the UFC, and out of the 200 UFC cards that have come over the past 20 years in the history of UFC’s existence, there hasn’t been a Light Heavyweight Championship unified through an interim match. Jon Jones is currently recognized with a record of 22-1, and Daniel Cormier is recognized with a record of 17-1.
Of course, Brock Lesnar will also be appearing on the card to fight Mark Hunt. This will be the co-main event, and is billed as an exhibition fight thanks to WWE partnering with the UFC to create a back-to-back supercard event, with UFC 202 taking place on August 20, 2016, while WWE’S SummerSlam pay-per-view event will happen on August 21, 2016. Interestingly enough, CM Punk, long-time WWE wrestler, has been confirmed to be fighting on the UFC 202 card against Mickey Gall. In addition, we now have confirmation that as part of the cross-entity agreement between UFC and WWE, Brock Lesnar will be allowed to use his WWE theme song on the way to the Octagon to fight. Is anyone else hoping that Paul Heyman will show up and cut a promo prior to Brock entering the ring? Mark Hunt is recognized with a record of 12-10, while Brock Lesnar is recognized with a record of 5-3. You can expect an amazing slug-fest in this heavyweight bout, and I can safely say that there will be blood poured on the mat.

UFC will also feature the next step in the evolution of women’s UFC, as the female Bantamweight championship will be on the line as Miesha Tate defends her title against Amanda Nunes. Tate gained her fame after beating champion Holly Holm, who previously defeated well-known adversary Ronda Rousey. This will be Miesha Tate’s first title defense as Bantamweight Champion, as she is slotted in the third-to-last fight to take on Amanda Nunes.
Another notable fight is the featherweight bout between Jose Aldo and Frankie Edgar, who have actually met previously in their UFC tenures. Aldo and Edgar met at UFC 156, on February 2, 2013, where Jose Aldo successfully defended the UFC Featherweight Championship against Frankie Edgar, and the fight even won the Fight of the Night award, which nets both fighters a nice bonus.

Cain Velasquez will also be taking on Travis Browne in a heavyweight fight, which should be an entertaining watch for any viewer, whether they are a UFC fan or not. Cain Velasquez has a very brutal, roughneck style. Neither of these men have fought each other, so expect an entertaining fight. Cain Velasquez is recognized with a record of 13-2, and Travis Browne with a record of 18-3.
The final fight worth mentioning is the young fighter and internet-favorite, Sage Northcutt vs Enrique Marin. Sage Northcutt is a 20-year-old man with a recognized record of 7-1 by the UFC, and is looking to begin his lineage. Northcutt lost his first-ever fight in the UFC on January 30, 2016 to Bryan Barberena on a Fox Sports UFC Fight Night. Northcutt is noteworthy because of his young age and calm demeanor, and you may have heard of the reports floating around that Northcutt is being trained by his father. Both Northcutt’s current opponent and past opponent, Enrique Marin and Bryan Barberena respectively, have criticized Sage’s training camp due to his father’s overwhelming presence in training Sage on how to fight. Enrique Marin is recognized with a record of 8-3 in MMA.

How to Stream UFC 200 Online For Free

UFC 200 will be NOT be streamed online with the UFC Fight Pass. The UFC Fight Pass is simply an archival network, full of older UFC fights and even corporations that have entered into an alliance with UFC such as Sherdog, GLORY kickboxing, and many more fighting corporations around the world. UFC 200 will only be available to watch through pay-per-view, which means you will have to contact your local cable provider (or internet service provider) for more information. However, from my personal experience, UFC on Saturday nights typically run around $50 for the purchase, which an upgraded HD feed costing up to an additional $20.
Sports bars and some chains, such as Buffalo Wild Wings, will offer the UFC pay-per-view for free-of-charge to any visitors. Of course, you’ll probably be required to make a purchase in order to stay and view the whole thing, so make sure you bring some friends and find a dedicated driver. The best chance to finding a local bar that may be showing UFC 200 on July 9, 2016, would be to call and simply ask.
In addition to UFC 200 happening, there will also be three consecutive events happening during the weekend for the UFC’s second annual “Fight Week.” During this week, a fan-based convention will be simultaneously occurring where visitors can meet with their favorite fighters, attend panels and events, and receive free items for simply attending.
UFC 200 will be available to stream on the UFC Fight Pass network, but not for 90 days following the event. It is also worth noting that for potential viewers in the UK, any of the information I have is currently up-in-the-air; BT Sports currently has the rights for UFC until the end of July, but the Sky network has been rumored to be making big plays and UFC 200 could be the first available pay-per-view on Sky.