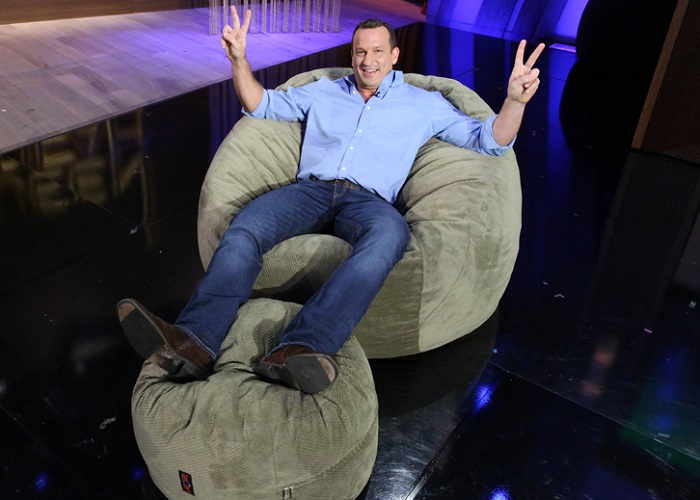 Byron Young was working for a liquidation company in Gainsville, Florida back in 2001, but despite enjoying his work he was keen to set up business for himself. Although he had no idea what sort of business he wanted to run, a flash of sudden inspiration led to the invention of his unique CordaRoy’s beanbag chair.

He had made a beanbag himself for his home, but he realized that a beanbag with square foam filling would be easy to convert into a bed. Thinking that someone would already have invented such a useful item of furniture, he searched in local stores for one but found that there was no such product available.

Byron launched the CordaRoy’s company and spent those early days making bean bags himself in his garage. Although he could only make five units per day initially, he was easily able to sell them. He looked for additional investment at conventions across America but was unable to attract a new partner.

The CordaRoy’s business made steady and consistent sales, eventually, Byron managed to outsource the manufacturing process to a third-party but still found he had no additional funds to market his product.

In mid-2012 Byron attended a local casting audition for Shark Tank but had no real hope of being successful. The producers were impressed by his enthusiastic and likable personality and surprised the beanbag businessman by accepting him there and then.

When Byron entered the tank, in March 2013, he was hoping to gain a $200,000 investment for 20% equity in the CordaRoy’s business. The friendly and positive entrepreneur launched straight into his polished and well-presented pitch by telling the sharks that the CordaRoy’s beanbag was the most comfortable bean bag on the market, ‘It’s like sitting on a cloud’ he asserted. He revealed that the super soft foam filling was designed to support the body evenly because it had no pressure-points, but that wasn’t all. Byron unzipped the case of the beanbag, and pulled out the insides, and announced to the interested looking sharks ‘And there’s a bed inside’.

Lori Greiner wanted to try the beanbag out for herself. She sat down in it and Robert Herjavec asked if it was comfortable. Lori confirmed it was very cozy and tried the bed too, agreeing with Byron that it was an excellent product.

Kevin O’Leary wasn’t looking quite so comfortable about Byron’s valuation of $1 million. He asked Byron, slightly menacingly, if he was claiming the sales were so impressive that the business was worth the million dollar price tag. Kevin shared his opinion that sales would need to be at least $200,000 a year in order to justify the valuation.

Byron didn’t look unsettled in the least by Kevin’s challenging statement. He told the sharks that he had applied for and been awarded, a utility patent for the CordaRoy’s beanbag, and the company had twice defended the patent in court against much larger companies. All the sharks were impressed with that revelation, even Kevin confirmed that he liked that story, but he still wanted information about sales figures, ‘Tell me about the numbers’ he prompted the entrepreneur.

Byron confirmed that in the previous year sales had been $1.4 million, and the sharks looked impressed, Byron continued by telling the sharks that he saw the CordaRoy’s business as being worth at least $5 million a year. He asserted that he had everything in place to expand the business, a store at The Mall of America, manufacturing procedures and administrative support, but he needed a strategic partner, someone to help him open doors with big retailers.

Daymond John picked up on Byron’s roundabout description of his recent business expenses and asked what profits had been achieved from the $1.4 million in sales the previous year. Byron admitted that the profits had only been approximately $100,000, and explained that it was because he had set up all other areas of the business in preparation for the expansion, and had now reached ‘critical mass’ in terms of his current sales opportunities.

The sharks asked about Byron’s previous marketing strategies, and the entrepreneur revealed that he had been on QVC in the past, although the sales achieved had not been great on that occasion, Byron suggested that was because his slot had been 5 days before Christmas, one of the hardest days to pitch on the shopping channel. Lori agreed that was not a great time to be on QVC, and asked how long ago he had been on the channel. Byron told her it had been a decade previously, and all the sharks seemed surprised at how long CordaRoy’s had actually been in business.

The sharks asked some more questions about profit margins and retail opportunities, Byron dealt with them all professionally and although some of the sharks were looking concerned, Kevin O’Leary in particular, Lori and Robert both seemed to have been infected with the entrepreneur’s enthusiasm.

Daymond John asked what Byron wanted to use the $200,000 investment for if he were to get a deal in the tank. Byron told him the funds would be used mainly for marketing and promoting the CordaRoy’s brand, as all the other elements of the business were already in place and ready to deal with an increase in sales.

Daymond confessed that the main areas he would be able to assist with the business would be in manufacturing and distribution, and as Byron had already developed those areas of the company fully there was little assistance he could really offer, and Daymond was out, but he wished Byron the best of luck with his fellow sharks.

Mark Cuban thought that the bean-bag, although a great and original product, should really be classed as ‘an impulse buy’, and Byron’s plan to spend additional investment on marketing was unlikely to yield effective results. Due to that Mark was out too.

Kevin’s rejection of the CordaRoy’s business was based on financial considerations only, he thought the business was actually worth about $500,000. Byron disagreed with him but Mr. Wonderful swept his objections aside. He revealed he had considered offering $200,000 in exchange for 50% equity in the company, but ultimately didn’t think a partnership would be worth it, and Kevin dropped out too.

At last there was a ray of hope for Byron, who was beginning to look a little concerned with the loss of three of the sharks, Robert Herjavec announced that he was prepared to offer the requested $200,000 in exchange for 40% equity, but only if Lori was prepared to join in on the deal too.

Lori thought about the proposal for a minute, but eventually declared that she didn’t want to partner with Robert, but she ruminated aloud that there could be a big demand for the product, and it could do well on QVC. She announced that she had a ‘Once in a lifetime offer for Byron’.

The QVC queen offered the required $200,000, but in exchange for 60% equity in the business. Byron looked shocked for a moment but asked Lori ‘So you want to control the business?’. Lori confirmed that she did, but asserted that under her guidance the business would be a big success. Byron stated that he couldn’t give up control of the business, and made a counteroffer, $200,000 for 40% equity, he urged Lori to accept his proposal.

Lori thought again but eventually admitted that there was just too much work involved, she told Byron she would settle for 58% equity, but she believed she could make him millions, with an enormous amount of commitment and energy.

Byron, faced with what he knew was his only chance of a deal, asked Lori if he could trust her, and of course, the Shark smiled and assured him he could. Lori told him to ‘Take it or leave it’ and Byron agreed to the deal with the words ‘Lets do it’.

CordaRoy’s Now in 2018 – The After Shark Tank Update

Byron’s new partner received some criticism for the deal she had made after the show first aired. Some of the viewing audience suggested the offer had been ‘predatory’ and ‘unjust’, but Byron himself has never doubted that teaming up with Lori Greiner was a fantastic result for him and CordaRoy’s.

Immediately after the show, he spoke about how he had been determined not to leave the tank without a deal, and even though Lori’s offer had taken him completely by surprise, the beanbag entrepreneur was extremely thankful that he had managed to get any deal at all.

That early positive attitude seems to have been entirely justified with the benefit of hindsight. In an update on the CordaRoy’s segment, in April 2014, Byron and Lori shared some of the remarkable progress the business had made since the original segment had first aired just over a year previously.

The initial impact of the show had been incredible, so incredible in fact that the CordaRoy’s website had crashed for the first vital 24 hours, Byron revealed that Lori had told him not to worry about the situation, and had assisted him in obtaining a new, more reliable site immediately. The sales went through the roof as soon as the CordaRoy’s site was back up, and they stayed up from that point on.

In the first eight months after the segment, total sales had been an incredible $3 million, and they were increasing steadily. Lori set Byron up with a slot on QVC, and the resulting interest was greater than Byron could ever have dreamed. His stock was oversold in the first 20 minutes of his QVC appearance, with sales averaging over $25,000 per minute. Byron spoke about his partnership with Lori in the update and confirmed he had absolutely no regrets about his decision in the tank and was thankful every day that he had gained such a fantastic partner.

Now in 2018, CordaRoy’s has continued its successful rise, and it has come a long way from those early days when Byron made five bean-bags a day in his garage. The company now has its own 90,000 square foot manufacturing facility, and an 8,000 Sqft showroom. The CordaRoy’s range of beanbag chairs, that now include designer covers, customizable designs and a lifetime guarantee for all products are available not only from the company website, but are also stocked in Big Box Stores, Ace Hardware, and Bed Bath and Beyond. 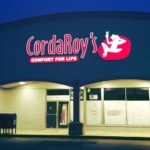 Early in 2016, Byron spoke about his partnership with Lori, and as usual, had nothing but the highest praise for his Shark partner, he described the Queen of QVC as ‘amazing’ and revealed that she never stops working, he believes she would be the perfect business partner for any entrepreneur. He has regular orders worth half a million dollars coming in and describes accepting Lori’s deal in the tank as ‘The best decision I ever made.’

It appears that business is better than ever in 2017. According to Cordaroy’s Facebook page, queen size bean bags have been back ordered, however, many other sizes are still in stock. And with over 200 reviews and 4/5 stars on Amazon, it appears that consumers are very happy with the product. Follow the Facebook page or Twitter, @CordaRoys, to keep uptodate with the company.

One can only admire the bravery of Byron Young, for his potentially risky decision to give up control of the CordaRoy’s business to his new partner, after so many years struggling to make it a success, but for that step into the unknown, he is now in the most comfortable financial situation of his life.