Stepping into the Shark Tank is Brian Kleinschmidt. Brian is a “dad-trepreneuer” from Florida, and has come to the Shark Tank to seek an investment of $50,000 in exchange for 15% of his company. His company is “Ez-Pee-Z,” and as Brian says, he is confident that his product will “flip the Sharks’ lid.” One of Brian’s first experiences as a dad was the inevitable potty training phrase. Brian was shocked and disgusted to see that the same type of foam donut that Brian was trained on, 30 years earlier, was still being used. Brian then says it is time to put the toilet on a “donut free diet.”

Introducing Ez-Pee-Z, which is a way to not only make it easier to train a child to use the toilet, but also make it much easier on the parents. The Ez-PeeZ operates as a normal, adult-sized toilet seat, but with a simple flip of the lid, body training becomes easy as one… two… pee! As Brian explains this, he kneels down next to the toilet and flips the front portion of the lid back, which allows for a child to sit comfortably on the toilet. A very simple, elegant solution – the best kind of product.

Kevin immediately asks about the flipping of the lid, as the lid looks like it can actually pinch the child’s skin due. However, Brian explains that although the lid appears like it will pinch the child, it actually doesn’t. The lid is a 3d print sample since it is in the prototype phase, and unfortunately, 3d printing has some limitations. Once the product goes to manufacturing, it will become seamless and should no longer have a little gap in it that appears like the child can be harmed using the EZ-Pee-Z.

Kevin then points out that the Ez-Pee-Z is nearly incomparable to the padded donut that Brian threw during his pitch of the Ez-Pee-Z, since the donut was padded and the Ez-Pee-Z is not padded. However, Brian feels that his product is not just for potty training and serves as more of a medium to introduce the child to using the toilet and sitting on the thing appropriately. Children need a smaller seat up until they are around 6 or 7, as Brian himself has a 6-year old who is tall and skinny. His daughter still needs something to compensate for the larger toilet seat, otherwise she will “fall into” the toilet. 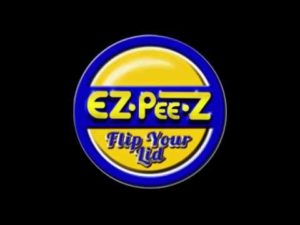 Robert voices another concern about the product; in order to use the Ez-Pee-Z, he would have to take it home and replace his existing toilet seat cover. How many people are really willing to change their toilet seat? However, Robert points out that is two screws. The Sharks fall silent for a moment, then Lori speaks up next. Brian has not sold any products yet since it is still in the prototyping phase, so Lori needs to hear about Brian’s background. Brian explains that his background might be a combination of the 5 Sharks; he grew up like a little Mark Cuban, since Mark went around selling garbage bags from door-to-door. Brian and his brother went around to wash cars in his neighborhood.

Brian looks to Robert next, explaining that he just read Robert’s book. While Brian’s father did not sweep a warehouse, he was a janitor who still went out of his way to ensure that his family had everything that they needed. Mark cuts off Brian who had looked to Kevin next, explaining that they need to hear more about his background and less of the brown-nosing. Brian continues on, explaining that he studied marketing and sales throughout college. Brian then got married and settled down, then began to flip houses. He saved up enough money to flip 3 homes at once in 2008, which was the worst possible time to do something of the sort. Brian nearly lost every single penny he had, and his wife decided she wanted to move to greener pastures. He never understood, until now, how much he gained by losing nearly everything.

After that, Brian moved back home where he then started his own gym business. He went hard enough to earn 200 grand in 4 years, where he then opened three gyms and began to franchise his own gyms. Now, of that franchise of gyms, Brian owns the three most successful ones. Mark then returns to the business at hand, asking Brian how long he has been working on the Ez-Pee-Z product. Brian explains that the initial concept was developed several years ago, and Mark then asks if the best that he could really do was to create a 3-d printed version of the seat? Where is the actual prototype and work being done to showcase the final, finished version of the product?

Brian then explains that he wanted to try to do most of the legwork for the intellectual property side of things including trademarks and patents prior to showcasing the final product. He wanted to ensure that he made the right decisions, but Mark says that he is not buying into the idea, and then exits the deal. Mark is the first Shark out. Barb speaks up next, explaining that she does not think a traditional padded donut is a big deal. The padded donut flips up like a regular seat, and if there is a mess, you can just wash it out in the tub.

Brian then tries to say he does not know when the last time Barbara potty-trained was (which she aptly replies, 9 years ago), but things have changed. Brian launches into a sort-of tirade about his product while Barbara could not look anymore lethargic, but Brian continues on to say imagine when a guest comes over. Mark points out that the Ez-Pee-Z is a “visual eyesore” while Barbara also admits that she is not buying into Brian’s product, and she also exits the deal. Barbara just does not get it and does not think it will work. 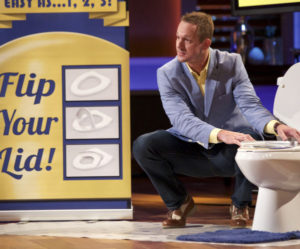 Robert says that Brian is a good salesman, but there is a point where it becomes transparent that Brian is just pitching his product. Robert likes the research and groundwork that Brian has done, but ultimately, there is an emotional threshold that Brian crossed and sold the Sharks too much on his product. Brian then apologizes and explains that he is ultimately excited to be here, but Robert has to believe in the product. In this case, the idea of a consumer buying the Ez-Pee-Z to replace an existing product, that works without issue, is just not something Robert can buy into. Robert is also out of the deal.

Kevin and Lori remain, and Lori speaks first. The idea appeared clever at first, like a better mousetrap (the full saying is, “build a better mousetrap and the world will come to your door”). But, Brian has no proof of concept whatsoever. But Brian says that his mom would be very upset with him since he forgot to lower the lid, and then he lowers the lid to reveal a full US Utility Patent on the product. Lori likes the patent since that is something not a lot of people achieve. While Lori thinks the idea has potential, she ultimately has no faith in the product and is the fourth Shark to exit the deal.

Only Kevin remains as the final Shark. Kevin, with a smile on his face, explains that all toilets lead back to Mr. Wonderful. Kevin explains that the product has no merit and there is no market, and the good news is that Brian has not wasted his time and money in bringing the product into full-scale production yet. There is still ample time to take it “behind the barn and shoot it,” so why spend your time creating something that does not solve any problem? There is still a problem, Kevin says.

Brian fires back that this is his entrepreneurial spirit and he saw a problem in potty training that needed to be solved, but Kevin remains unconvinced. Brian could have came up with something much, much better. Brian then asks Kevin about a $10,000 loan he asked his mother for when he was starting a business, which embarasses Kevin as all the other Sharks turn to Kevin and jokingly mock him for being a “momma’s boy.” Kevin started softly and his mom believed in him, so Brian is looking for Kevin to believe in him.

Still, Kevin did not invent a toilet seat. The idea is ridiculous, so it is time to “close the lid” on the entire idea, and Kevin then exits the deal as the final Shark. Brian leaves the Shark Tank without finding an investment in his potty training accessory. As Brian walks out of the Shark Tank, Kevin stands up and walks over to the seat and pops a squat, explaining that he can definitely feel the hinge of the toilet. Robert jokes for Kevin to be careful, since that is his only prototype.

It took a couple years but eventually the Ez-PEE-Z made it to market. It’s not carried in retail stores however you can check it on Amazon.com by clicking here.