Since the airing of the initial episode on August 13, 1997, South Park has made a name for itself as a brash and edgy, yet appealing cartoon. Something about the good intentions, but bad nature of the citizens of the fictional South Park keeps viewers like you and me from turning away. South Park definitely has a long, intricate history, but here are a few things that only the most hardcore South Park fans might know.

South Park enters its 20th season this year, a feat that few animated shows have ever had the privilege of accomplishing. Of course, the new season should give fans something to get excited about if last season’s topical, over-arching storyline was just a sample of what is to come.

During South Park’s inception, both Trey Parker and Matt Stone knew that they wanted to create a low-budget, low-quality look that ultimately fed the show’s charm and helped it to gain prominence in the late 1990s. The first episode took around 3 months to create in a library at the university where Parker and Stone studied, and the entire project (of ONE episode!) required them to work close to 12 or 14 hour days.

Fortunately, since the airing of the first episode, Parker and Stone have changed to more contemporary methods of animating the show. For the first 15 seasons of South Park’s life, the team at South Park Studios employed the use of Autodesk Maya and low-quality character renders in order to animate each episode faster while simultaneously retaining the show’s “budget charm.” 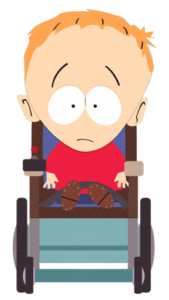 3. Timmy Burch, the child confined to a wheelchair, was initially poorly received, then became a series icon

South Park is well-known for its host of edgy and inappropriate characters, but Timmy Burch may have been the start of all this. Timmy initially appeared in the episode “Tooth Fairy Tats 2000,” but did not feature a more prominent role in the series until he appeared in “Timmy 2000,” which drew a large amount of controversy from both the network and fans. Fans were primarily upset that Timmy was portrayed as a mentally-deficient man confined to a wheelchair who could only say his name (with the infamous “Timmah!”), or “Livin’ a lie.” However, all of the other children characters in South Park treated Timmy like an equal, which Comedy Central loved. After the airing of “Timmy 2000,” Comedy Central was quick to ask Parker and Stoner about the reappearance of Timmy.

4. Most characters were intended to be a one-off appearance, but quickly became prominent

Just like Timmy Burch, few characters were ever intended to step into such a prominent and beloved role. Randy Marsh, the well-meaning father of Stan Marsh and geologist, was never intended to be such a central character to the show, but became more and more featured and prominent in each season. As the show developed, the characters and town of South Park fleshed out, and now each character most likely has their own beloved catchphrase and fanbase.

Randy Marsh, Jimmy Valmer, and Timmy Burch are perhaps the three (now) most prominent characters that were never intended to be used for anything other than a device to move the plot along, or as a butt of a joke.

5. Season 8 was the “Season from Hell” for Trey Parker and Matt Stone

During season 8 of South Park, Parker and Stone were simultaneously working on their puppet film mocking “macho” American archetypes, “Team America: World Police.” As a result, the two divided their time equally between South Park and Team America, but ended up working close to 100 hour weeks on the projects. Parker himself said that he would “chug coffee for 18 hours a day, then pop sleeping pills to get 4 hours of sleep a night.”

6. Trey Parker is a self-admitted “Japanophile”

Trey Parker admitted himself that he is a “Japanophile,” or someone who just loves Japanese culture. Parker is fluent in Japanese, and this is evidenced in the episode, “Good Times with Weapons.” The comedy song, “Let’s Fighting Love!!” features Japanese lyrics, which, in typical South Park fashion, references male anatomy and the broken Japanese language stereotype.

7. The most well-received episode, “Make Love, Not Warcraft” was not thought highly of by Parker and Stone

Episode 8 of season 10, “Make Love, Not Warcraft,” was the first

episode that Parker and Stone had ever considered calling up the network and begging them to please not air. They felt so poorly about the episode and felt like they had sold out, and were dreading the episode.

Fortunately for Parker and Stone, “Make Love, Not Warcraft” was incredibly well-received and may just be one of the show’s all time highest ratings. In fact, this episode won the show its second Emmy award for “Outstanding Animated Program, less than 1 hour.”

8. For “Make Love, Not WarCraft,” Blizzard allowed filming on the testing servers of the upcoming World of Warcraft Launch

Continuing on my personal favorite episode and one of the most well-received episodes, Blizzard Entertainment actually allowed for the staff of South Park Studios to access their public test servers for the upcoming World of Warcraft expansion, “The Burning Crusade.” Any World of Warcraft player can immediately recognize the scenery of Elwynn Forest, Hillsbrad Foothills, or Arathi Highlands, and at certain points, the general chat (chat of everybody in the zone) can be seen in the bottom left corner.

Blizzard Entertainment fully sanctioned Parker and Stone using their servers, and even included “machinima” (machine cinema) tools which allowed for Parker and Stone to animate the 3d characters of World of Warcraft more fully than the game could allow.

9. Due to the breakneck pace of creating the show, only one episode has ever been missed 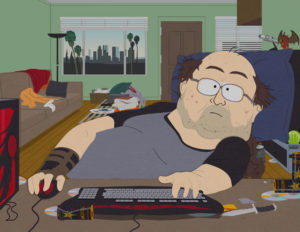 South Park has a very interesting style of creating their episodes; since each episode airs on a Wednesday, the South Park Studios team works Thursday through Wednesday to create each episode in its entirety. As a result, this requires the team to work an insane amount of hours per week with high accuracy, but this allows for South Park to remain extremely current and topical. For example, the episode “Chinpokomon” was created just around the time that the Pokemon Anime began to really get popular in the United States.
During season 17 (aired in 2013-2014), Parker and Stone missed their first-ever deadline due to a power failure at South Park Studios. The team lost power while working on “Goth Kids 3: Dawn of the Posers,” requiring them to air “Scott Tenorman Must Die” in place of the show, but with live tweets allowed. Prior to the power loss, South Park Studios had an insane run of 240 episodes aired consecutively without ever missing a single deadline.

10. South Park Studios kept the original renders of their first 10 seasons, allowing them to re-render it into a 1080p definition

South Park Studios kept the files for their first few seasons, allowing the team to eventually return and re-render them in a much higher quality. The studio also accompanied the new renderings with the full uncensored audio, which means that the entire show is available in a high definition format.

South Park’s 20th season debuts on September 14, 2016 on Comedy Central. For all of us South Park-heads, Parker and Stone have confirmed that the show is signed to a contract with Comedy Central for up to 23 seasons, which should see us laughing until the end of 2019.