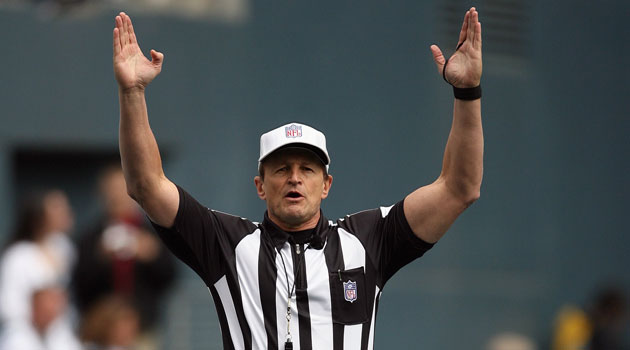 Referees are absolutely crucial in any sport – not only do they maintain order in times when the action of the game can get a little hectic, but they are also the dividing forces that can either award a game to a team or cause them to lose it. A lot of pressure rides on referees to make the right call, so a lot of experience is needed. As a result, some of the highest-salaried referees in the NFL are the ones who have been around the longest.

In addition to experience and tenure being a determining factor for referees, there are also numerous positions for team. These positions include the umpire, who is responsible for viewing the offensive and defensive line for illegal blocks, the referee, who is responsible for essentially running the show and has the final say on any rulings, the head linesman, line judge, back judge, center judge and side judge. The final four positions each take a position to form a complete box around the action of the game, which ensures complete coverage from the entire squadron of referees. Each position has different salary rates, as well – the umpire and referee are the highest paid positions (and the most critical to maintaining a fair game), while the head linesman and center judge typically make a little more money than the remaining three positions.

Referees are not bound to any single home base, but are relocated around as needed – this ensures a different team of referees for each individual game, which gives the biggest impression of fairness. Each referee is paid a flat base salary, which is intended to help alleviate them through the other 40 or so weeks of the year when the NFL has no need for their services, on top of receiving a per-game salary. Outside of their refereeing jobs, referees are allowed to work other jobs but are not permitted to make more than 50% of their NFL income. Referees also receive large bonuses for officiating post-season games, which are more than double their per-game pay.

Typically, referees will receive their officiating schedules at the beginning of the season, which directs them where to go and what games to official. The referees travel and stay in hotels at the NFL’s expense, which lets them keep most of their money – I was unable to find if food was included in the referee’s’ travel packages, but for the most part, the referee squadrons do travel in some relative luxury, although their travel is not as luxurious and comfortable as the players’.

Walt Coleman is the most experienced NFL referee, with a whopping 28 years of experience in the NFL under his belt, 27 of which have been spent refereeing (since 1989). Walt Coleman serves as a referee official and because of this, is the head of his own team of officials. Walt has refereed more than 450 different games, which excludes the start of the 2016 season. As a referee, Walt Coleman is paid more than $3,000 per game and has one of the highest starting salaries. Walt makes around $205,000 per year, which is the veteran salary for referee – assuming that he referees an average of 16 games per year, Walt Coleman makes around $50,0000 during the NFL season. The other $155,000 is paid out in the other months of the year, netting him a monthly salary just shy of $13,0000.

Walt Coleman wears the #65 jersey, and graduated from Arkansas College prior to entering the NFL for just one year before becoming an official. His son, Walt Coleman IV, has just joined the NFL as a referee in 2015.

Ed Hochuli is the second most-experienced NFL referee, although he has just one year shy of Walt Coleman’s expertise with 27 years as an official in the NFL. Ed Hochuli is also a referee and the head of his own team. Ed has refereed more than 430 different games, excluding the beginning of the 2016 NFL season. As a veteran, Ed Hochuli also receives the standard veteran rate of $205,000 salary, excluding the game bonuses. Since Ed Hochuli also officiates from the Referee position, he receives a bonus of $3,000 per game, which comes out to just under $50,000 for refereeing an average season of 16 games. Like Walt Coleman, Ed Hochuli also receives a salary of just under $13,000 per month from the NFL.

Ed Hochuli wears the #85 jersey, and graduated from Texas’s El Paso college. Ed Hochuli has been with the NFL since 1990.

Jeff Bergman serves as a head linesman, which means he does not receive as much pay as the first two on the list. However, Jeff Bergman has 25 years of experience under his belt, which makes him the third senior of all the available NFL officials. Jeff Bergman also receives the veteran salary of $205,000 thanks to his quarter-century of experience, but receives much less per game due to his position. Jeff Bergman still brings in a cool $1,500 per game, which means that he makes a more meager $24,000 for an average 16-season game. This brings his entire salary to a $230,000 estimate. Since he is not a referee, he is a part of Jeff Triplette’s referee squadron.

Tony Veteri serves as a line judge, the first one on this list. He also has 25 years of experience coaching in the NFL. As a line judge, Tony Veteri makes the least amount of money out of the three available tiers, but also coordinates with two other judges to make official calls and decisions before eventually going to the referee. Tony Veteri is a part of Clete Blakeman’s refereeing squadron. Tony Veteri, as a veteran, receives $205,000 per year prior to his per-game bonus, which is around $1,250. Assuming an average season of 16 games, this means that Tony Veteri makes around $225,000, which $20,000 of that coming in during the NFL season.

Mark Steinkerchner graduated from the University of Akron college based out of Ohio, and currently wears the #84 jersey.

Byron Boston, the third line judge on this list, serves under Walt Anderson’s officiating squad. Byron Boston has 22 years of experience officiating in the NFL, which also places him just shy of receiving the veteran’s pay. This means he has a salary of about $185,000, and assuming that he receives the veteran line judge’s pay of $1,250 per game, brings in an extra $20,000 during the NFL season. This means that Byron Boston makes an estimated amount of $205,000 per year, with a tenth of that coming in during the NFL season.

Byron Boston graduated from the University of Austin, Texas, and currently wears the #18 jersey.

Tony Corrente graduated from the University of California State – Fullerton’s campus, and currently wears the #99 jersey as a referee.

Laird Hayes serves as the first side judge on this list – as a side judge, this means he is part of the same team that Byron Boston is on, which is Walt Anderson’s refereeing squadron. Laird Hayes has 22 years of experience; he has earned a slight pay bump over the usual $1,000 that is paid out to side judges per game, bringing in $1,200 for an entire season. Laird Hayes has a salary of $160,000 prior to receiving his NFL per-game bonus, which in an average season nets him $19,200 before any playoffs and accuracy bonuses. This brings Laird Hayes’s salary to just shy of $180,000.

Laird Hayes graduated from Princeton, New Jersey, and currently wears the #125 jersey as a referee.

Jeff Rice is the longest-tenured umpire with 22 different seasons under his belt; he graduated from Northwestern University and wears the #44 jersey.

The final referee on this top 10 list of highest paid NFL referees includes Walt Anderson, who has been mentioned a few times previously. Walt Anderson has 21 years of experience and serves in the referee position, and is the head of his own referee squadron. As a referee, Walt Anderson receives around $3,000 per game, on top of his $185,000 yearly salary. Assuming an average 16 game season, Anderson brings in $48,000 for refereeing games; this brings his salary to $233,000 per year.

Walt Anderson has both Byron Boston and Laird Hayes serving on his refereeing squadron. He has 21 years of experience in the NFL as a referee and graduated from the University of Texas. He currently wears the #66 jersey.