In 2004, minor league baseball start Paulie Ambrus purchased the Canyon Inn in Yorba Linda, California. This was a bar where he worked as a bartender for nearly a decade, so it was near and dear to his heart. General Manager Jonny notes that Paulie is definitely a New York Thug-type. The Canyon Inn sales steadily increased for their first five years, nearly $30,000 a week, but as competition began to open in the area, Paulie refused to take advice or upgrade the bar. The young, hip crowd left the Canyon Inn for trendier hangouts. Jon Taffer and his crew of experts have come forth to rescue the Canyon Inn. The bar is currently bleeding more than $100,000 a year.

The city of Yorba Linda is one of the most affluent cities in the United States, with an income of more than $120,000 per household. In the neighborhood, however, Canyon Inn has been struggling. Jon and his wife, Nicole, perform reconnaissance. Jon is quick to point out that “inn” used to be used like “cafe,” but Canyon Inn looks like a disgusting dive bar as the front is not kept updated. Jon pulls up Yelp reviews, and most of them say the same thing – angry regulars keep newcomers out of the place, and nobody feels welcome if they do not frequent Canyon Inn. Jon sends Nicole in to check the place out and check out the core customers.

Nicole enters the Canyon Inn, which is a 2,000 square foot bar with 2 pool tables in the back that are frequently removed to open up the dance floor, and a horseshoe bar in the front of the venue. Nicole enters the bar, and her first impression is that the crowd is an older crowd – she uses the term “settled in.” A bartender pulls out a Stella Artois that Nicole ordered, but instead of pouring it out of the tap, she pulls a pre-poured beer out from underneath the bar. Nicole orders a round of drinks for the table that she sits near, and she notices lip marks on the plastic cup. To make things work, her cup breaks. Nicole asks the bartender which soups they have ready, and the bartender recommends avoiding the soups. Finally, a regular customer tries to wrap an arm around Nicole and basically molests her. 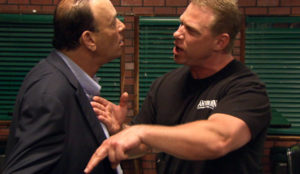 Jon enters into the bar and meets with Paulie by the pool tables. Jon starts by mentioning that the bar is definitely in trouble, and in the past 2-3 years, the numbers have gone down 30% and Paulie is not taking a paycheck half the time. Paulie believes he knows the business well, but Jon points out the disrepair and disgusting nature of the front of Canyon Inn. They are chasing away new customers, and a bar needs a 25% new customer acquisition in order to keep turning a steady profit. Jon also brings up his wife’s molestation and explains that this is not acceptable – nobody does this in any bars, and Jon understands that a bar has to have women. The two get into a yelling match that attracts the attention of the other customers, and Paulie deflects his lackadaisical attitude towards the incident.

In a meeting with the staff, Jon mentions that he wants to change the name of the bar. The last time Paulie got a paycheck was a couple months ago. Jon and Paulie get into another argument, and Jon begs his staff to open Paulie’s mind and make him realize that he doesn’t know everything because he hasn’t taken a paycheck in a few months. Jon brings in two experts that he calls “warriors” due to the doomed nature of the bar. He has brought in Michael Tipps, who is one of the most sought-after mixologists in the country with 17 years of experience under his belt. Eric Greenspan has been brought into rejuvenate the kitchen, and he owns the critically-acclaimed restaurant “The Foundry” with more than 20 years of experience. Jon and Chef Eric explore the bar, and the first thing Eric points out is the Progresso soup on the bar. He calls it cancer because of the high amount of salt in the kitchen. The food is all frozen, giving it a bland and unappealing taste. This also adds up the amount of money that Eric is wasting on.

Michael Tipps tours the bar and the first thing he notices is that the liquor bottles do not have caps on top of them, which is perfect for attracting flies. The top of the ceiling fan is also coated in dust. There is a sign that says “Save the Foam” as well – when you pour a beer, don’t pour the foam out, but save the foam because you will have to pour another pitcher. The foam is recycled. Michael and Jon have never seen another bar do this. Jon also pulls out the disposable cocktail glasses. There is more dust in areas behind the bar, and Paulie and Jon yet again get into a fight because Paulie is unwilling to accept responsibility for all the disgusting oversights. 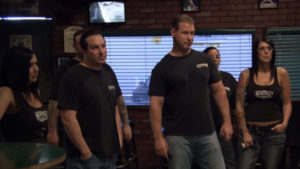 Michael Tipps starts working with the bar staff, and all of the staff have an amateur level at best. One of the security guys also doubles as a bartender, and his knowledge is very limited. In the kitchen, Eric starts working with cook Avalia. The menu is important, but the ingredients are more important – Avalia throws away the potatoes away, which is a waste of ingredients. Jon and Paulie sit down to enjoy a steak, and Jon actually likes the flavor of the steak – Paulie is buying a good steak, his cook makes a good steak, and he wants to help refine the steak that people will feel like they can only get at the Canyon Inn.

Paulie and the rest of the Canyon Inn staff come to the bar the following day to find the name is being changed and the sign is being torn down. Paulie is upset by this, but Jon promises that Paulie will like the final changed name. Jon has Paulie follow Michael Tipps and chef Eric, and Eric revitalizes the menu with a famed Baseball Cut. Paulie used to play baseball, so the name is only fitting – all the staff loves the revitalized menu.

The Canyon Inn has been renamed to the Canyon Saloon, which is where a hipper, younger crowd feels like they can go into the bar and have some drinks and a good time. Most of the interior has been stripped away, creating a much more open and relaxing atmosphere. Jon has also installed a music video system with more than 1,500 music videos that anybody can put credits in and request a music video to play. The bar has been refreshed with proper glassware and outfitting, as well. The soft opening of the Canyon Saloon proves successful, bringing in more than $100,000 in sales in just one night – Paulie also runs across a situation where a regular is hassling three young women, just like with Nicole, but he handles it much more professionally.

Canyon Inn Now in 2018- The After Bar Rescue Update

The rejuvenation of the bar has proven successful – the bar has a solid 3.5 star rating on Yelp, and the bar is still open to this day. The price range is rated highly, with a patron spending less than $10 per trip, excluding any beer or alcohol purchases. Bands still frequently play at the Canyon Saloon, appearing almost every weekend, and specials are the high point of any new customers. The Canyon Saloon is one of the most popular spots in Yorba Linda, California.