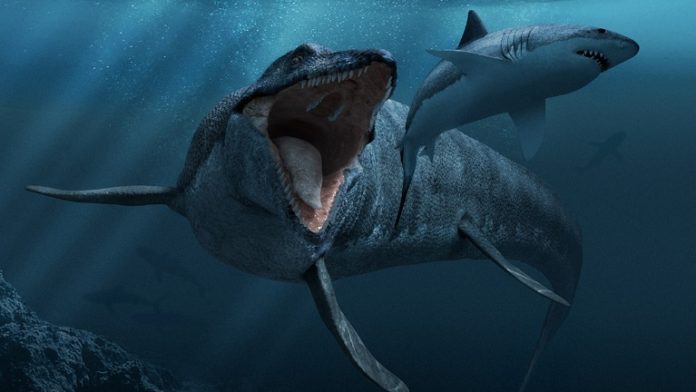 We get so relaxed while watching sweet dogs and even sweeter kittens on the internet that we sometimes forget that it isn’t all sweet and nice in nature. Even the documentaries about the underwater world are looking beautiful. But if we go a little deeper, to a depth of about 3000 feet and more, we will forget about all the sweet animals and enter into a brand-new and bizarre world of monsters that came directly from a nightmare. Here is our top 10 list of the most terrifying sea creatures. 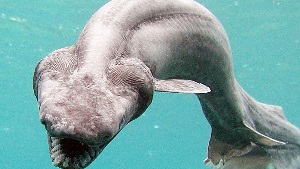 Chlamydoselachus Anguineus are one of the most important and rarest species of sharks in the world. It has a body of the eel and the typical shark jaws. Frilled Shark is the perfect explanation of the famous myths about huge and dangerous sea snakes. This shark species were considered as a ‘living fossil’, because the scientist thought for a long time that this species died out and until recently they were known only as a fossil. In 2007. the world has finally seen the real and alive Chlamydoselachus Anguineus. Long jaws allow them to swallow prey that is almost as big as they are and they usually feed on squids and small sharks. 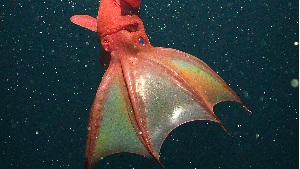 The vampire squid is considered one of the strangest creatures in the sea. It is named after its appearance due to its dark red skin colour and spreaded tentacles that remind of the vampire’s jaw. It is also known as a “vampire squid from hell”. Although, the name itself sounds scary, the squid isn’t dangerous for humans. It mainly resides in the tropics at the depth of 2000 to 3000 feet. The strangest thing about the vampire squid is the way it catches prey. Some experts are arguing about the theory that the vampire squid hypnotizes its prey. Also, when in danger, instead of ink it releases a sticky cloud of bright mucus. The predator is then blinded with the mucus that emits light, which gives a squid enough time to escape. 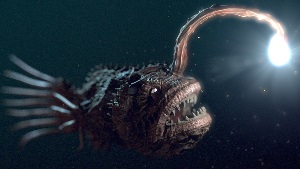 This fish has a terrifying jaws that have hundreds of sharp teeth and inhabits the dark parts of the deep ocean at about 3000 feet depth. She wears a light that makes this enough bizarre fish even more bizarre. This light on the head is used to attract the prey and thanks to its giant deadly jaws it can swallow prey twice its size. Probably the strangest fact about this fish is the way it reproduces. The female is the one that has a large jaw and light on the head. The male is much smaller and does not have any of these characteristics. Now, here is the bizarre part. The male plunges his huge teeth in the female and remains so until he lose all of his internal organs but the testicles. Females can have on them as many as six males pinned at once. 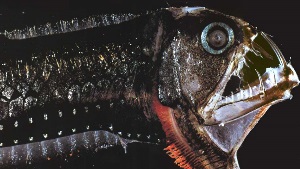 Viperfish live at depths of about 1600 meters and is known as one of the most terrifying sea monsters. Some of them are black as night, and they have organs all over the body that are called photophores, including the organ on the back that looks like a glowing stick, which they use as a decoy for the prey. Some types of this fish as well as many other species living in those depths have no pigment and therefore are transparent. They also have large eyes, so they can collect as much light as it reaches to the depths, which is little or nothing. 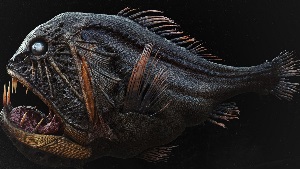 Anoplogasteridae takes its name from the Greek word anoplo, which means disarmed. Although it looks vicious and dangerous, this fish can grow only 6 inches. It has a short body and a big head. Because of its enormous teeth, it is called the Fangtooth, but also often called Ogrefish because of its horrible look. Colour of adults varies from dark brown to black. It lives at extreme depths of about 3 miles. The pressure at those depths is huge and the water temperature is near freezing. It is also really hard to find the food, which is why Fangtooth eats anything it finds. 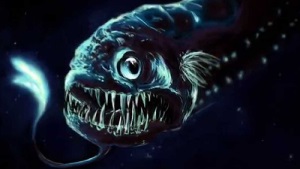 Despite its small size, which is about 16 inches, Stomiidae is one of the most terrifying predators in the deep sea. It has a large head and mouth equipped with many sharp teeth, that look like fangs. It has a long glowing thread on the beard that is used as a bait for the prey and to signal potential mates. When the unsuspecting fish gets close, it becomes grabed into the dragonfish’s powerful jaws. It lives in the deep waters of the ocean at depths of about 1 mile and can be found in most tropical regions around the world. 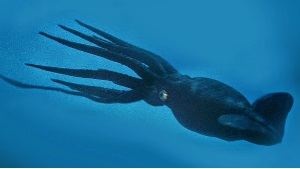 The giant squid, known as Architeuthis Dux, can grow up to 20 meters. It is currently the largest known invertebrate in the world. Very little is known about this mysterious animal because it was seen for the first time in 2004. Most of what we know about them comes from the bodies of the dead squids that are washed up on the shore, or those who were caught in fishing nets. During World War II, the surviving passengers of sunken ships have testified that these squids ate their friends. There have even been reports of giant squids that are withdrawing small boats in depth. Squid has eight long tentacles, which are used to capture and retain their prey. A sharp and powerful teeth, finishes helpless victims with frightening efficiency. 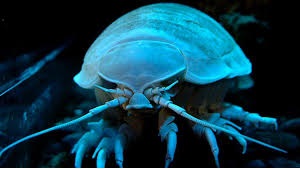 Their enormous size is a result of a deep sea gigantism phenomenon, which is described as the affinity of the deep sea animals to grow to larger sizes than the same species in a much shallower waters. They can grow to about 12 inches long and they are primarily scavengers, but they are also known to catch live prey. If you can call someone the survivor, it is these guys. They have lived on the earth since the time when all of the continents were merged together, which is known as Pangea. The Isopods can survive four years without food, so it is just a matter of time before they take over the earth. 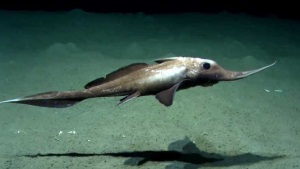 Biologists did not bother much when they were naming this unusual long nosed fish. Long nosed Chimaera can grow up to 5 feet and In South Africa they call it a ghost shark, although this fish is a distant relative of sharks. This horrible animal has one of the strongest venoms on the Earth. Just a touch of its poisonous dorsal fin can kill an adult man, although it is a very small chance for that to happen due to the depths where it resides. They can be found in tropical seas worldwide at about 4500 feet in depth. 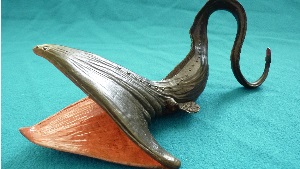 Gulper eel, also known as a Pelican Eel, is perhaps one of the most bizarre creatures in the deep ocean. Its most valuable weapon are the enormous mouth, which can be opened wide enough to swallow animals much larger than themselves. Unfortunate fishes which got trapped in Eels mouth are stored in a sack in the lower jaw, which looks like a pelican’s throat pouch. Its body is elastic so it has no problems with swallowing the prey much larger than itself. This animal is rarely seen in its natural habitat and for the most of our knowledge about them, we can thank to the fishing nets. They live in the oceans at depths from 3200 to 6500 feet.