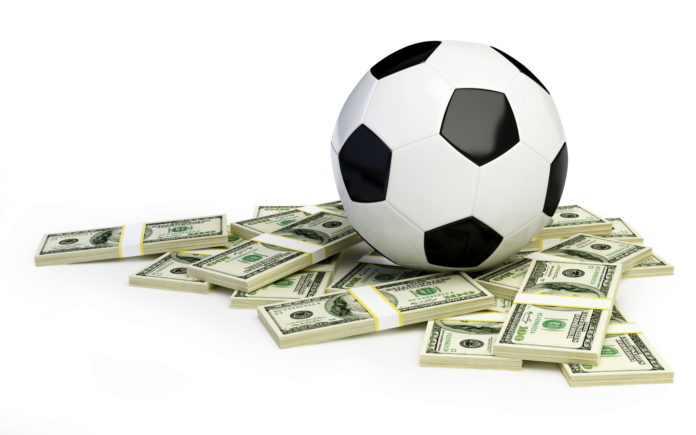 With over 250 million players and even more fans, football is the world’s most popular sport. Football’s massive player base and audience creates endless opportunities for money to be made for companies and athletes alike. The real money however, is made by the professionals. These elite athletes are adored and looked up to by millions. Every season, they go head on against other elite football players for titles, championships – and millions of dollars. 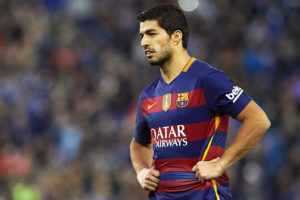 Technically gifted Uruguayan striker Luis Suarez has had numerous triumphs throughout his career, but has certainly had his share of difficulty. Although he is seemingly followed by controversy wherever he goes, Luis Suarez is adept at avoiding trouble as he is at scoring goals. He’s equally skilled at making money – the star makes nearly 300,000 per week. Suarez joined FC Barcelona for a transfer fee of approximately 93 million in 2014.

Suarez started his career when he was only 11 when he moved from his hometown of Salto to train with Montevideo’s Nacional. His skill was undeniable on the field. However, he has made headlines numerous times for getting into arguments with refs and other players. Although he even once was given a red card, the move that earned him the red card may have helped his team win. 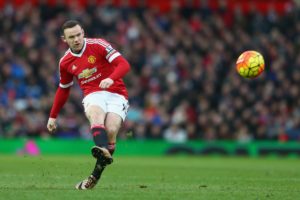 Wayne Rooney made his professional debut at only 16 years old. He made his senior international debut at age 17, and briefly became England’s youngest goal scorer. Now 31, he has scored 58 goals in over 118 international caps (appearances in a game). Rooney has also been honored with England’s Footballer of the Year award in 2008, 2009, 2014, and 2015. He holds the record for the most goals scored for a single club in the Premier League. 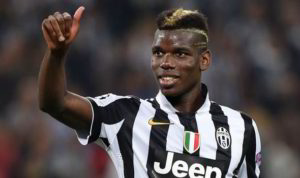 Young French football star Paul Pogba plays alongside high rolling teammate Wayne Rooney in Manchester United. At only 24 years old, Pogba is already earning the kind of money his fellow players work decades for. He was named on the most promising young players by The Guardian in 2014. His weekly paycheck of $360,00 wouldn’t be awarded to just any young player. 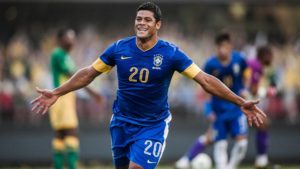 Hulk (real name Givanildo Vieira de Sousa) got his nickname for his resemblance to actor and bodybuilder Lou Ferrigno who originally played the Incredible Hulk. His athleticism, large physique, and aggressive playing style make him nearly untouchable as a forward. After transferring to Shanghai SIPG in 2016, he now makes a hulking $400,000 per week.

Hulk debuted professionally with Esporte Clube Vitoria in 2006, but was transferred to Japan’s Kawasaki Frontale, and again to Consadole Sapporo. He scored 25 goals in a single season with Sapporo. He then played for Tokyo Verdy until he signed with FC Porto, with whom he scored 16 goals in his first 16 matches in his 2010-2011 season. From 2012 to 2016, he played for Russian club Zenit. 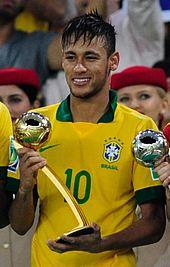 A graduate of the Santos FC academy, Neymar (full name Neymar da Silva Santos Júnior) garnered worldwide acclaim for his skill at an early age. By the age of 20, Neymar had already scored 100 goals. Inspired by father who was also a footballer, Neymar started playing for Santos FC at age 15. At only 16 years old, he was making nearly 500,000 per year. Even that figure pales in comparison to the 360,00 he now earns per week.

Neymar’s playing style and reputation have drawn prompted many to compare him to Brazilian football legend Pelé. Along with teammates Lionel Messi and Luis Suarez, he was responsible for winning the Copa Del Rey, Treble of La Liga, and UEFA Champions League in 2014-2015 alone. 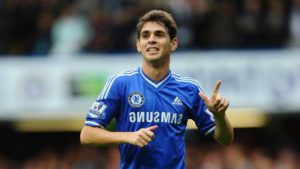 China is seeing a resurgence in the popularity of sports such as football. As a result, Chinese soccer clubs are enticing international players with massive paychecks. Although Oscar had formerly spend over 4 years with Chelsea FC, he signed a contract with Shanghai SIPG in a very controversial $75 million transfer December 2016. He may have made the right choice, at least financially – he now makes over $361,000 per week.

Prior to his transfer, Oscar had a difficult season and butted heads with manager Antonio Conte. Known for his energy on the field, the young player refused to warm the bench any more. Although he may one day return once more to Brazil’s national team, the start may very carve out a new legacy in China. 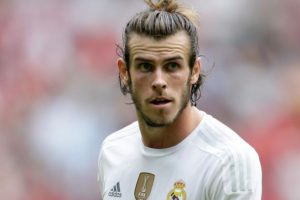 Welshman Gareth Bale is respected and feared by fellow players for his speed and skill on the field. He is the first Welsh footballer to play for Real Madrid, and quite possibly one of their best players of all time. His salary is also top notch – Bale earns almost $400,000 per week.

Many critics consider Bale to be one of the most athletic footballers in the world. Even when he was in primary school, PE teachers would impose special rules on him, as he won without contest in every sport. As manager Roy Keane has once said, “the only to stop Gareth Bale is to hit him”. 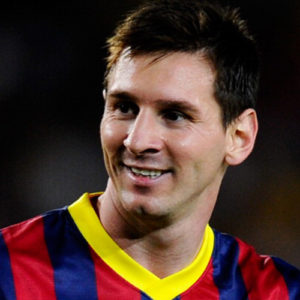 Lionel Messi is considered by many to be the up and coming best football player of all time. He is seen as the “heir to the throne” to football legend Diego Maradona. His world class skill earns him 425,000 per week. Many other up and coming football legends have looked up to Messi in their youth.

Messi received the award for the best player in the world in 2009, 2010, 2011, and 2012. Although Messi says no one could ever be better than Diego Maradona, Argentinian national team head coach Diego Maradona himself has said “Messi is my Maradona”. Messi is famous for his rushes to the goal from midfield, balance, and cunning. 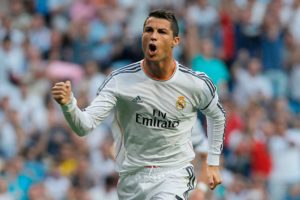 Few other players can even begin to compete with champion Cristiano Ronaldo. Ever since his debut Ronaldo has scored goals and won championships for his clubs.

Ronaldo once lived in poverty, sharing a room with his siblings. He now has a net worth of over 400 million and plenty of achievements to go with it. He is the second highest goalscorer in La Liga history behind Lionel Messi, and considered to be Messi’s rival. Ronaldo is also a fashion icon, and is sponsored by many of the most elite sportswear and designer fashion brands. 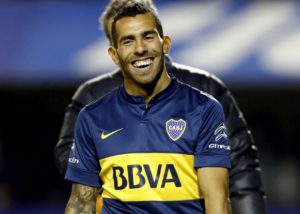 One of many professional players who have signed to Chinese clubs, Carlos Tevez became the highest paid footballer in the world. Although other players have higher net worths, Tevez now receives the most weekly – over 765,000.

Despite rumors that he will quit and return to Argentina at some point, Tevez is set on playing for Shenhua FC. He has had over 75 caps since his debut in 2004.