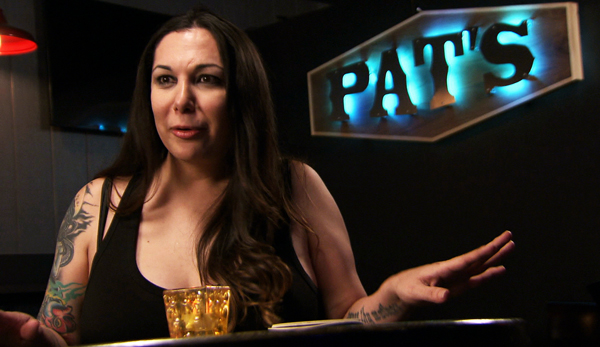 20 years ago, millionaire-businessman Ray Suruli bought Pat’s Cocktails. In the beginning, he was more hands-on with the business and ended up quintupling the business in the first few years. As he approached his 70s, he stepped out of the bar and into retirement and followed his life’s passion of big game hunting. He shows his kills, including bobcat, elk, zebra, and bear. In his absence, Ray handed the reins over to Jimmy; when Jimmy first came to Pat’s, he did well at his job and was paying attention. However, he fell for the love of his life and married Monique. The two quickly wed, but now, Jimmy only has eyes for his wife. As soon as he met Monique, his priorities changed, and the bar seemed more like it was a pain in his butt to make ends meet. Now, Pat’s Cocktails has slipped into a state of neglect – the bartenders all agree that it is a “s**thole.” However, Ray and his millions are nowhere to be seen since he very rarely comes to the bar. Now, the toilets are backed up, the coolers are running warm, but as long as Ray gets to drive a nice hummer, things are alright. Pat’s is hemorrhaging about $4,000 per month.

Just north of the Hollywood Hills, the three towns of Valley Village, North Hollywood, and Studio City converge. With a median age of 32, 5 years younger than the national median, this area hosts crowds of young Hollywood professionals who pull in a median household income of $71,000, 30% higher than the national median of $53,000. Even though temperatures soar into the hundreds daily, most patrons pass on by Pat’s Cocktails. Outside the bar, Jon Taffer has pulled up with veteran mixologist Russell Davis, who was voted the mixologist of the year in 2012 by Nightclub & Bar magazine. The first thing the two of them agree is that the front of the bar is dated, and Jon reveals that more than 26,000 cars pass by the area daily.

There is a great young untapped market, but the building does not catch your attention – the building is dimly lit, which appears to be closed. The barbecue restaurant next door is open with people in it, however. Inside Pat’s Cocktails, there is a window that customers can use to order barbecue form the restaurant next door. However, all the seats and tables are worn and look awful. To make matters worse, the bar looks like it is made from bathroom tile. The most disturbing fact is that Ray is totally absent; generally, when the business is failing, that is the time when the owner should be stepping in.

Manager Jimmy is drinking at the bar with his wife, and Russell comments that the two of them look like they are on a date. Jimmy is making out with his wife at the bar, and it is embarrassing for the customers around them. One of the patrons comments that the two of them should get a room. Behind the bar, bartenders Vivian and Danielle are running the operation – they were actually the two women that called Jon and his crew in. For the recon mission, Jon sends in three locals who know the local market and the bar scene.

The three spies enter the 2,000 square foot space with a 37 foot bar that houses only 1 speedwell. The bar is mostly empty other than billiards tables. The three spies enter and seat themselves at the bar, and Vivian immediately checks all three of their IDs. There is great interaction, which is one of the basics that they teach to bartenders to create some connection. However, Vivian pulls a 1.75 liter jug of tequila, and Jon comments that even if Russell was behind the bar, he would have an issue handling that large and heavy of a jug. Russell concedes that he cannot pour properly from those big jugs. The bar does not have any lemons, which Jon says is the most popular garnish in the bar business. All of their drinks are strong, which Russell says is not surprising when you pour out of a 1.75 liter. 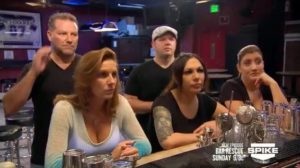 Jon then comments that the barbecue setup is ridiculous, and the three spies say that leaving their drinks is sketchy and that they are afraid that someone will spike them. However, the barbecue looks absolutely delicious, but the barbecue is all served in a takeout container – pretty girls do not typically want to eat out of that type of thing. It cheapens the whole environment. However, the three spies like the food. Manager Jimmy is still at the end of the bar; Jon calls Vivian to find out what type of manager Jimmy is. Jon instructs Vivian to walk up to three or four customers, pour them drinks, and give them to him. She also must pour herself a drink and see if Jimmy notices any of this.

Vivian goes up to the three spies and pours them a shot, as well as herself. Jimmy is making out with his wife while free drinks are given out. Jon calls again, and Vivian is not surprised that Jimmy did not pay attention at all. Jon then instructs Vivian to give out as many drinks as she can in the next half hour, and he will pay for them all at the end of the night. This is all a test to see if Jimmy notices. Vivian gives away more than 50 free drinks; Jimmy walks in with fresh ice and does not notice the 15 glasses lined up that Vivian is giving away for free. The crowd actually thanks Jimmy for the free drinks, and he still does not catch on. Jon calls one more time and tells Vivian to take the 1.75 liter jug of tequila and walk around, topping off customer’s drinks if she needs to. Jimmy does not notice.

Jon and Russell are irate; for the last hour, no transaction has been rang up on the cash register. Unsurprisingly, Jon storms in and explains the situation to Jimmy – the men at the barbecue restaurant next door peep in at the screaming. Jimmy begs Jon to stop the name calling, but Jon explains that Vivian and Danielle were the ones who called him in. The truth is that Vivian and Danielle are fantastic at their jobs, the owner is gone, and the manager may as well not be here. 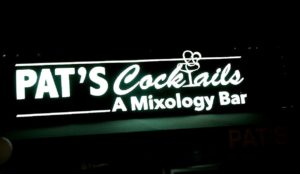 The next morning, Jon lays into both Ray, who surprisingly attends, and Jimmy – the small bar staff all agrees that Ray is rather incompetent and neglectful. The bar frequently runs out of products, so the barstaff spends their own money – Ray, who drives a $90,000 car, says that ordering lemons is too expensive. Monique, Jimmy’s wife, joins in with the training and starts contributing more towards the effort of the bar.

Pat’s Cocktails was renamed to “Pat’s Cocktails – a Mixology Bar”. The barbecue restaurant started a relationship with Pat’s Cocktails, and the window has been entirely removed in favor of a more appropriate kitchen setup. Pat’s Cocktails is now highly rated on both Yelp and Facebook, with a solid 3.5 star rating across 147 reviews and most of the reviews praising the price point and the ‘dive bar’ atmosphere without feeling like a cheap bar. Facebook has an even stronger review with a 4.2 star review across 87 different votes, and more than 6,000 check-ins on Facebook and FourSquare. Pat’s Cocktails is still open to this day and maintains an active social media presence on both Facebook and Twitter.